Why scooping an asteroid sample is harder than it looks

When NASA’s OSIRIS-REx spacecraft descends toward the surface of Bennu on Oct. 20, it will be the first time that a U.S.-led mission attempts to pick up a sample of pristine material from an asteroid. Bennu is likely an extraterrestrial accumulation of the original leftovers from the formation of our solar system.

The University of Arizona-led mission to sample an asteroid many millions of miles from Earth is anything but a walk on the beach. As a matter of fact, Bennu “is not nearly the sandy beach we hoped and were expecting,” said Thomas Zurbuchen, associate administrator for the Science Mission Directorate at NASA, during a Sept. 24 media event. Once the spacecraft moved closer and began sending back the first detailed images of Bennu’s surface, it surprised the mission team and the public alike by revealing a rocky surface littered with house-sized boulders.

Since its arrival on Dec. 3, 2018, the OSIRIS-REx spacecraft has spent its time flying around the asteroid while scanning, photographing, measuring and studying the dark, rocky rubble pile below—from afar at first, then up close. Using its laser altimeter instrument, or OLA, combined with the data from images taken with the spacecraft’s PolyCam instrument, the mission has produced maps of unprecedented detail, better than those of any planetary body visited by spacecraft. The mission’s primary sample site, which sits inside a crater dubbed Nightingale, was selected based on those maps.

“We selected Nightingale because, by far, it has the most fine-grained material of all the four sample site candidates,” said Dante Lauretta, the mission’s principal investigator and a professor at the UArizona Lunar and Planetary Laboratory, during the press event. “We spent early 2020 doing low-altitude reconnaissance passes over this site, ultimately imaging at about an eighth of an inch per pixel. We basically have incredibly detailed images covering the entire crater, and we counted all of those rocks.”

Shortly before 11 a.m. Arizona time on Oct. 20, thrusters on the spacecraft will fire and gently nudge OSIRIS-REx out of its orbit around Bennu and steer it down toward the rugged surface. That burn will set in motion a sequence of events that has been planned meticulously by the mission team.

NASA’s first asteroid sample return mission, OSIRIS-REx, will make a daring attempt to “TAG” asteroid Bennu on Oct. 20 – touch its surface and collect a sample for return to Earth. Sample site Nightingale, the mission’s targeted touch down spot, is only a few parking spaces wide and surrounded by building-sized boulders that pose a hazard to OSIRIS-REx. The spacecraft will carefully navigate down to the sample site with its sampling arm extended and touch Bennu’s surface for several seconds. Upon contact, the collector head will fire a bottle of nitrogen gas to agitate loose material, which is then caught in the spacecraft’s collector head. After this brief touch, OSIRIS-REx will fire its thrusters to back away from Bennu, navigating to a safe distance from the asteroid. The spacecraft will depart Bennu in 2021 and deliver the sample to Earth on Sep. 24, 2023. Credit: NASA’s Goddard Space Flight Center

What Happens if Everything Goes as Planned? And if it Doesn’t?

Once the spacecraft has set off on the descent to its target, it will rely on what the mission team calls a “hazard map”—a detailed representation of areas within the sample site that may present a risk to the spacecraft due to the presence of large rocks or uneven terrain.

If everything goes well, the spacecraft will extend its Touch-and-Go Sample Acquisition Mechanism, or TAGSAM, which is suspended at the tip of an 11-feet-long arm. Reminiscent of an air filter used in an older car, it is designed to collect fine grained material, but is capable of ingesting material up to about three quarters of an inch.

The sample will be collected during a “touch-and-go” maneuver, or TAG, during which the sampling head will make contact with Bennu’s surface for around 10 seconds. When the spacecraft detects contact, it will fire one of three nitrogen gas bottles, and much like a reverse vacuum cleaner, stir up surface material—called regolith—inside the sampler head, before the spacecraft backs away.

As a backup, the sampling head features a series of small discs designed to pick up dust like sticky pads, in case something were to go wrong with the gas-powered sampling process.

The team will examine footage taken by the spacecraft’s sampling camera, or SamCam, of the sampling head as it makes contact with the surface. SamCam is one of three cameras aboard the spacecraft that were built at UArizona. 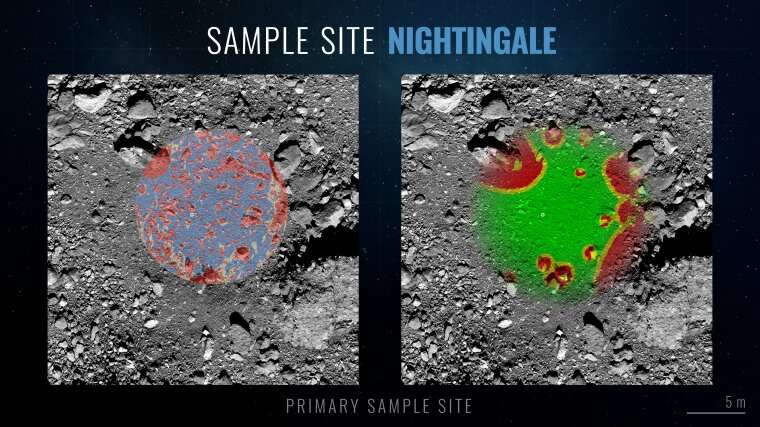 The OSIRIS-REx spacecraft will rely on this map to avoid hazards and touch down in an area where suitable sampling material is abundant. Green areas are safe for touch-down, while approaching red areas will cause the spacecraft to back away. The most promising areas for sample collection are marked purple. Credit: NASA/Goddard/University of Arizona

“We’ll be able to tell if we were tilted, if gas blew out to the side, if material was sufficiently stirred up,” Lauretta said. “We also will have a very good indication of the exact location in Nightingale where we made contact and we can compare that to our samplability map, to assess if we touched down in an area where there is abundant samplable material or one of the rockier locations.”

SamCam also will be able to take images of the sampling head after the spacecraft has departed Nightingale crater and is a safe distance from the asteroid. Because the sampling head is mounted on a wrist joint, the team will be able to examine it at a different orientations relative to the sun and the sampling camera. The team also will see any dust or material on any other area of the TAGSAM, on the arm or on the blanketing over the gas bottles, Lauretta explained.

“This will tell us whether we moved enough material around when we made contact, and maybe, just maybe, we’ll be able to see some of the particles in the interior of TAGSAM, if the particles are in the right location inside the head and if we get the right illumination conditions.”

After TAG, the team will then spend one week assessing how much sample was collected. It will use several methods to estimate the amount of sample, beginning with imaging the sample collection head for visual inspection. The team will also be performing checkouts of the spacecraft and instruments to verify that didn’t result in degradation to either.

A Pirouette in Space

Next, the spacecraft is prepared to perform a maneuver designed to give the scientists on the ground an estimate of how much sample was collected. With its sampling arm extended, it will slowly spin around an axis perpendicular to TAGSAM to measure the change in mass attributable to the collected sample by comparison to a previous measurement taken with the sampling head empty. 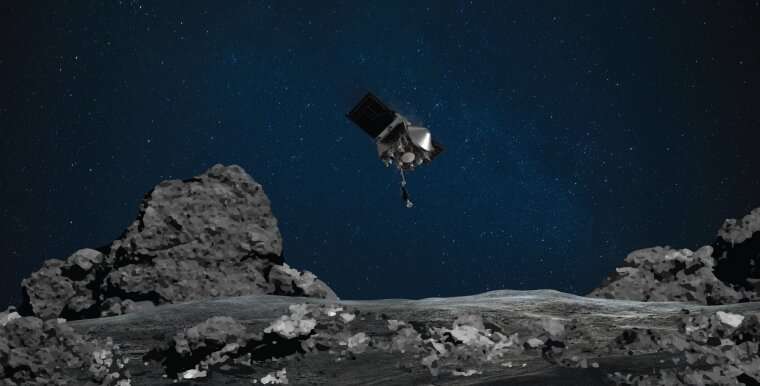 OSIRIS-REx is the first US-led mission attempts to pick up a sample of pristine material from an asteroid. Credit: NASA/Goddard Space Flight Center

Due to uncertainty in the technique, the result of the measurement needs to exceed the required sample mass to have high confidence that an adequate sample is present.

“We’ll be looking for a 90% chance that we have 60 actual grams or more,” Lauretta said. “Anything below that, we’ll have conversations with NASA to assess the status of the spacecraft, its ability to go in for a second TAG, and to decide whether we want to return with what we have or go for a second TAG attempt.”

The spacecraft can make multiple sampling attempts, as it is equipped with three bottles of nitrogen gas. For example, if it were to touch down in a safe location but failed to come up with a good sample, the team has developed contingency measures to ensure the mission still meets its primary science objective: collect at least 60 grams (just under 2 ounces) of surface material and return it to Earth.

“In case the decision is made we need to go in again, we have to get the spacecraft back into orbit and conduct a series of burns to line up its position in orbit for the next tag attempt,” said Mike Moreau, deputy project manager at NASA’s Goddard Space Flight Center in Maryland.

While Nightingale was identified as the best place to get a sample on all of Bennu, it still presents a lot of challenges, Lauretta said.

“By far, the most likely outcome we will have on Oct. 20 is we will contact the surface and came away with a large sample that exceeds our requirements. But Bennu has thrown us a number of curve balls already, which is why we are fully prepared to tag at Osprey (the backup site) if that becomes necessary,” he said.

Once the decision is made to stow the sample, the team will proceed to place the head inside the sample return capsule and seal it for return to Earth in 2023. And when that time comes, chances are that it’ll bring back even more than the minimum of 60 grams, as TAGSAM was designed to capture at least 150 grams, and under optimal conditions up to 4 pounds—enough to keep generations of researchers busy in laboratories on Earth.