Like most spiral galaxies, the Milky Way has a roughly spherical collection of stars at its center called the bulge. How the bulge formed has been a long-standing mystery, with many studies suggesting that it built up over time through multiple bursts of star formation.

New research finds that the majority of stars in our galaxy’s central bulge formed in a single burst of star formation more than 10 billion years ago. To reach this conclusion, astronomers surveyed millions of stars across 200 square degrees of sky—an area equivalent to 1,000 full Moons. The resulting wealth of data is expected to fuel many more scientific inquiries.

Our Milky Way galaxy is shaped like two fried eggs glued back-to-back. A central bulge of stars sits in the middle of a sprawling disk of stars. Though this is a common feature among myriad spiral galaxies, astronomers have spent decades puzzling out how and when the Milky Way’s central bulge might have formed. Were the stars within the bulge born early in our galaxy’s history, 10 to 12 billion years ago? Or did the bulge build up over time through multiple episodes of star formation?

Some studies have found evidence for at least two star-forming bursts, leading to stellar populations as old as 10 billion years or as young as 3 billion. Now, a comprehensive new survey of millions of stars instead finds that most stars in the central 1,000 light-years of the Milky Way’s hub formed when it was engorged with infalling gas more than 10 billion years ago. This process might have been triggered by simple accretion of primordial material, or something more dramatic like merging with another young galaxy.

“Many other spiral galaxies look like the Milky Way and have similar bulges, so if we can understand how the Milky Way formed its bulge then we’ll have a good idea for how the other galaxies did too,” said co-principal investigator Christian Johnson of the Space Telescope Science Institute in Baltimore, Maryland.

“This survey gives us a big picture view of the bulge in a way that many previous surveys have not been able to do,” added co-author Caty Pilachowski of Indiana University in Bloomington, Indiana.

Looking younger than their age

To reach their conclusion, the team studied the stars’ chemical compositions. Like many Hollywood stars, stars in the galactic bulge look like they’ve undergone a cosmic Botox treatment—they appear younger than they are. That’s because they contain about the same amount of heavy elements (heavier than hydrogen and helium) as the Sun—what astronomers call metals. That’s surprising because metals take time to accumulate. They must be created by earlier generations of stars, ejected through stellar winds or supernovas, and then incorporated into later generations.

Our Sun, at 4.5 billion years old, is a relative newcomer, so it makes sense that it would be replete in metals. In contrast, most old stars within our galaxy are lacking in heavy elements. And yet bulge stars are metal-enriched despite their advanced age.

“Something different happened in the bulge. The metals there built up very, very quickly, possibly in the first 500 million years of its existence,” said co-principal investigator Michael Rich of the University of California, Los Angeles.

The team used the measured brightness of stars at different wavelengths of light, particularly in the ultraviolet, to determine their metal content. Stars forming at different times would be expected to have different metallicities on average. Instead, they found that stars within 1,000 light-years of the galactic center showed a distribution of metals clustered around a single average. If stars were students and metallicities were U.S. grades, bulge stars would all have a solid ‘C’ average, rather than a group of ‘A’ students and a group of ‘D’ students. This suggests that those stars formed in a brief firestorm of star birth. 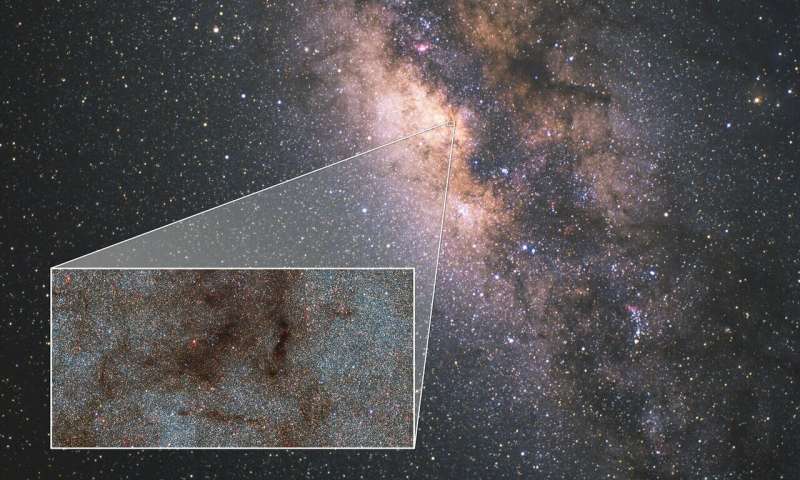 This image shows a wide-field view of the center of the Milky Way with a pull-out image taken by the Dark Energy Camera (DECam) at the Cerro-Tololo Inter-American Observatory in Chile. While the Milky Way photo spans 71 degrees of the sky, the DECam image covers 0.5 by 0.25 degrees (an area about twice as wide as the full Moon). Credit: Milky Way photo: Akira Fujii; Inset photo: CTIO/NOIRLab/NSF/AURA/STScI, W. Clarkson (UM-Dearborn), C. Johnson (STScI), and M. Rich (UCLA)

The team surveyed a portion of the sky covering more than 200 square degrees—an area approximately equivalent to 1,000 full Moons. They used the Dark Energy Camera (DECam) on the Victor M. Blanco 4-meter Telescope at the Cerro Tololo Inter-American Observatory in Chile, a Program of NSF’s NOIRLab. This wide-field camera is capable of capturing 3 square degrees of sky in a single exposure.

The team collected more than 450,000 individual photographs that allowed them to accurately determine chemical compositions for millions of stars. A subsample of 70,000 stars were analyzed for this study.

“Our survey is unique because we were able to scan a continuous section of the bulge at wavelengths of light from ultraviolet to visible to near-infrared. That allows us to get a clear understanding of what the various components of the bulge are and how they fit together,” said Johnson.

The wealth of data collected by this survey will fuel additional scientific inquiries. For example, the researchers are looking into the possibility of measuring stellar distances to make a more accurate 3-D map of the bulge. They also plan to seek correlations between their metallicity measurements and stellar orbits. That investigation could locate “flocks” of stars with similar orbits, which could be the remains of disrupted dwarf galaxies, or identify signs of accretion like stars orbiting opposite the galaxy’s rotation.

Is the Milky Way’s bulge-formation history unique or common in galaxy evolution? To answer that question, astronomers will have to look at galaxy assembly in the distant, young universe—a task for which NASA’s James Webb Space Telescope was specifically designed. “With Webb, we’ll have a front-row seat to watching galaxies like our Milky Way forming,” said Rich.

The Blanco DECam Bulge Survey is named in honor of Victor and Betty Blanco. Victor Blanco was the first Director of the Cerro-Tololo Inter-American Observatory; he and Betty Blanco also pioneered study of the galactic bulge and Magellanic Clouds using the observatory’s 4-meter telescope.

These results are being reported in two companion papers accepted for publication in the Monthly Notices of the Royal Astronomical Society.