In 79 AD, Pompeii was buried under ash and frozen in time, leading to the preservation of a whole city. And so the world’s oldest surviving amphitheatre was almost perfectly preserved thanks to the St Vesuvius eruption.

Amphitheatres, with their gladiators, executions, and macabre contests, have fascinated people for millennia. They have featured in countless novels, books, and video games. One of the best-preserved and possibly the oldest extant amphitheatres is found at Pompeii. It is one of the many structures that were protected by deep ash and debris when Mt Vesuvius erupted in 79 AD.

The History of Pompeii and the Amphitheatre

Pompeii was originally an Oscan settlement made up of five villages. These villages united to form a larger community and came under the control of the Greeks from Cumae. At a later date they were occupied by Etruscans and in the 3rd century BC the area went into decline when it was conquered by the Samnite mountain tribes. After the Romans were the victors of the Samnite Wars, it wasn’t long before Pompeii became a Roman colony and underwent a process of Romanization.

The amphitheatre was constructed between 80 and 70 BC by two local notables who built the structure to benefit the local community and also to win popularity and political support. As with other amphitheatres in the vast Roman empire, the one in Pompeii hosted gladiatorial games and this early model likely played an important role in the development of these contests. Other bloody tournaments involving animals were hosted and often criminals were executed to entertain the crowds.

In 59 BC, Pompeiians and Nucerians clashed during some gladiatorial games and the senate ordered that the site be closed for 10 years. Sadly, in 79 AD Mount Vesuvius erupted killing approximately 1500 people and the town of Pompeii was buried under hot mud and ash, frozen in time for seventeen centuries. The structure, like the rest of the town, was forgotten about and lay undisturbed.

It was only in the 18th century that Pompeii was rediscovered and excavated. The arena was opened to the public in the 19th century and has been used to host concerts. Among those who played the venue were Frank Sinatra and Pink Floyd. 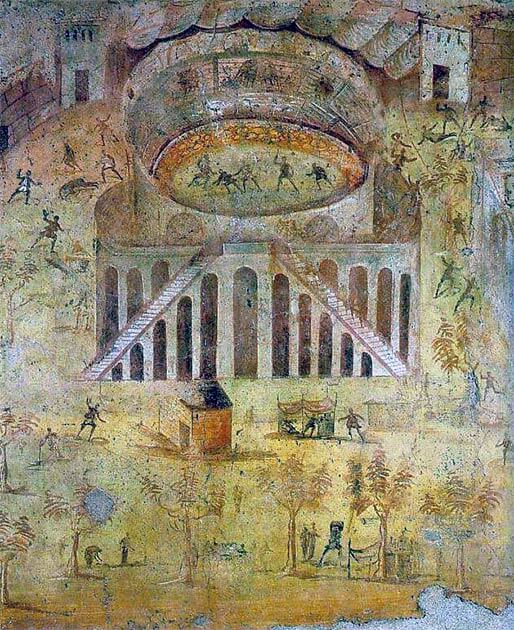 “The Amphitheatre at Pompeii, a fresco depicting the riot between the Nucerians and the Pompeians”, Casa della Rissa nell’ Anfiteatro, Pompeii. (Public Domain)

The Remains of the Amphitheatre at Pompeii

The elliptical structure is built of stone and measures 445 by 341 feet (136 by 104 meters). The design was originally based on a theatre but was adapted to host games and contests. The term derives from the ancient Greek amphitheatre, with amphi meaning ‘on both sides’ and theatron, meaning ‘place for viewing’.

The structure was situated in a natural depression and is supported on one side by an embankment. The tiered seating, or cavea, where the audience sat and watched the games was divided into three parts to reflect the number of social classes and is still well preserved, although much of the upper tier is now covered in grass. The local elite sat closest to the action. 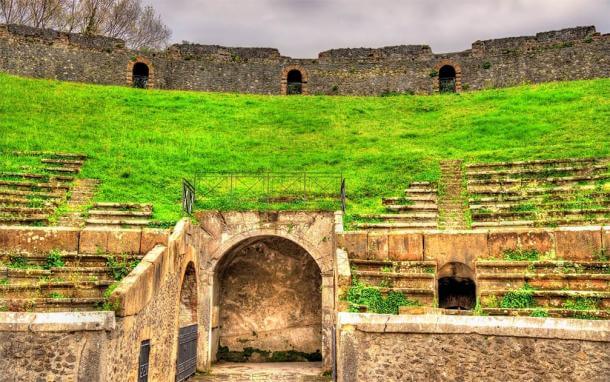 The original access ways to the amphitheatre can still be seen and on either side of the circular arena two tunnels would have given access to the rival gladiators entering the arena. These access tunnels would also have been used to release the animals. Visitors can still walk where the brutal games took place.

This structure once held up to 20,000 people, a significant proportion of the population of the region. Unlike later amphitheatres, it does not have an underground section with tunnels.

Visiting the Amphitheatre and Other Wonders in Pompeii

The amphitheatre is part of the archaeological park in Pompeii and located on the east side, close to the House of Foro Boario. Public transport and accommodation and plentiful. A day pass can be purchased which gives visitors access to the archaeology park covering 44 hectares, so it is best to set aside a day for your visit.

How ‘super donkeys’ were the original war horses: Asses were interbred to be stronger and faster so they could haul a chariot into battle centuries before horses, DNA analysis of 4,500 year-old skeletons reveals

How ‘super donkeys’ were the original war horses: Asses were interbred to be stronger and faster so they could haul a chariot into battle centuries before horses, DNA analysis of 4,500 year-old skeletons reveals