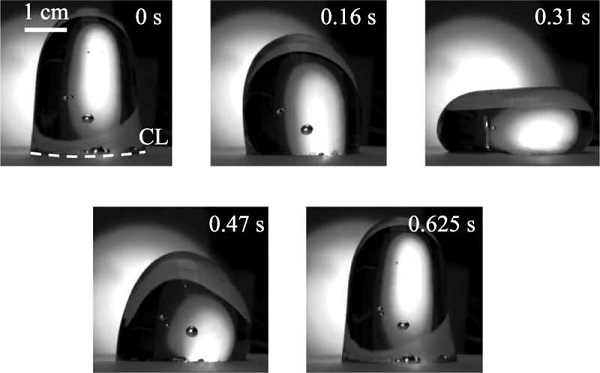 At a time when astronomers around the world are reveling in new views of the distant cosmos, an experiment on the International Space Station has given Cornell researchers fresh insight into something a little closer to home: water.

Specifically, the space station’s microgravity environment illuminated the ways that water droplets oscillate and spread across solid surfaces—knowledge that could have very earthbound applications in 3D-printing, spray cooling, and manufacturing and coating operations.

The experiment and its findings, while successful, are also bittersweet. The paper’s co-senior author Paul Steen, the Maxwell M. Upson Professor in the Smith School of Chemical and Biomolecular Engineering in the College of Engineering, died in September 2020, just before the experiment was conducted.

“It’s sad that Paul didn’t get to see the experiments launch into space,” said co-senior author Susan Daniel, the Fred H. Rhodes Professor in the Smith School of Chemical and Biomolecular Engineering, and Steen’s longtime collaborator. “We hope that we did right by him in the end, and that the paper that we produced from the work would make him proud.”

Daniel began collaborating with Steen shortly after she first came to Cornell as an assistant professor in 2007. While her current research is focused on the biological interface of the coronavirus, her graduate work was in chemical interfaces and fluid mechanics—a field in which Steen was advancing a number of theoretical predictions based upon how droplets resonate when subjected to vibrations. The two researchers instantly connected.

“He knew the theory and made predictions, and I knew how to execute the experiments to test them,” Daniel said. “Basically, from the moment I got here in 2007 until he passed away, we worked on trying to understand how liquids and surfaces interact with each other, and how the contact line at the interface between them behaves under different conditions.”

Their collaboration resulted in a “photo album” of the dozens of possible shapes that an oscillated drop of water can take. Steen later expanded on that project by cataloging the droplets’ energy states as evidenced by those resonant shapes, organizing them into a “periodic table” classification.

In 2016, Steen and Daniel received a four-year grant from the National Science Foundation (NSF) and NASA’s Center for the Advancement of Science in Space to conduct fluid dynamics research aboard the International Space Station U.S. National Laboratory.

Space is an ideal place to study the behavior of fluids because of the radical reduction of gravity, which on the ISS is about one-millionth of its terrestrial level. This means that fluid-surface interactions which are so small-scale and speedy on Earth that they are practically invisible can be, in space, nearly 10 times larger—from microns to centimeters—and their duration slows nearly 30-fold.

“It’s harder to study these drop motions, experimentally and fundamentally, when you have gravity in your way,” Daniel said.

Steen and Daniel selected a few resonance shapes from their photo album that they wanted to explore in detail, with a focus on how a water droplet’s contact line—or outer edge—slides back and forth across a surface, driving the way the liquid will spread, a phenomenon that can be controlled by varying vibration frequencies.

The team prepared meticulous instructions for the astronauts to follow, compressing four years of planning into a several-minute experiment in which every second was tightly choreographed.

With the researchers monitoring and providing feedback in real time on the ground, the astronauts deposited 10 mL water droplets via a syringe onto nine different hydrophobic surfaces with varying degrees of roughness. They also forced pairs of droplets to coalesce together, and placed droplets onto an oscillator and tuned its vibrations to achieve the targeted resonance shapes. The water droplets’ wobbling and jiggling movements were filmed, and the researchers spent the next year analyzing the data.

“Josh was able to carry on with the theoretical side of this work in Paul’s absence, which was not something I was ready to step into and do. It was nice to have him rejoin the team and help us make sure that we were able to extract everything we could from the data we collected,” Daniel said. “Now we can essentially use the theory that Paul created to make predictions, for example, in processes where you’re spraying droplets on surfaces, or in 3D-printing, or where liquids spread across a surface really quickly.”

Vanessa Kern, Ph.D. was also a co-author of the paper.