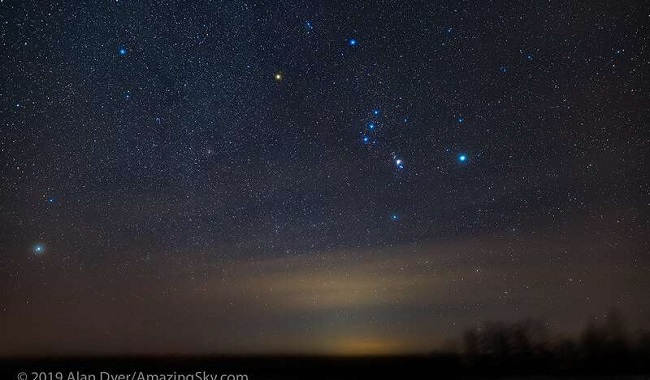 Waiting for Betelgeuse: what’s up with the tempestuous star?

Have you noticed that Orion the Hunter—one of the most iconic and familiar of the wintertime constellations—is looking a little… different as of late? The culprit is its upper shoulder star Alpha Orionis, aka Betelgeuse, which is looking markedly faint, the faintest it has been for the 21st century.

When will this nearby supernova candidate pop, and what would look like if it did?

The story starts, as all good astronomy and space stories seem to, on Friday night going into a holiday weekend. We started seeing discussion on Betelgeuse trending on social media on the evening of Friday, December 20th, and dug down to the source of the excitement: a December 8th paper, “The Fainting of the Nearby Red Supergiant Betelgeuse,” by researchers at Villanova University. Light curve estimates courtesy of the American Association of Variable Star Observers (AAVSO) verified the assertion that the star had, indeed, faded about one magnitude, or a little over one-half from its usual magnitude +0.5 to +1.5. Noticing the sky was clear, we headed up to our parking garage rooftop observing site in downtown Norfolk, Virginia, to take a look. Betelgeuse was, indeed, noticeably fainter, about a shade dimmer than nearby +1 magnitude Aldebaran.

Now, a change in one magnitude isn’t unusual for a variable starsuch as Betelgeuse. But such a large dip always gives the astronomical community pause. A red giant star 12 times as massive as the sun and about 700 light years distant, the variability of red-orange Betelgeuse was first noted by astronomer Sir John Herschel in 1836. Physically, the star is currently bloated out to a radius of perhaps eight astronomical units (AU). If you plopped it down in the center of our solar system, Betelgeuse might extend all the way out past the orbit of Jupiter.

This fact also allowed astronomers to use the first crude optical interferometric measurements from the 2.5 meter telescope at Mount Wilson Observatory to measure Betelgeuse’s physical diameter of 50 milliarcseconds. In the late 1980s, astronomers used an emerging technique of aperture masking interferometry to obtain the first direct ‘image’ of Betelgeuse.

Betelgeuse is always worth keeping an eye on, as it’s one of the closest candidates in our galaxy for a nearby supernova. We see supernovae frequently in distant galaxies, but such an event has not been witnessed in our galaxy in the telescopic era: Kepler’s Star in 1604 in the constellation Ophiuchus was the last supernova observed in the Milky Way, though a supernova in the nearby Large Magellanic Cloud put on a good show in 1987. A red giant like Betelgeuse lives fast and dies young, exhausting its supply of hydrogen fuel in just under 10 million years. The star is destined to undergo a core implosion and massive collapse and rebound as a Type II supernova. Such an explosion could occur 100,000 years from now… or tonight.

Is the fading act a prelude to a truly spectacular show, or a false alarm? Astronomers are unsure, but a supernova event just 700-odd light-years away would be an unrepresented opportunity to study one up close. Not only would every optical telescope get trained on the exploding star, but assets such as the Laser Interferometry Gravitational Wave Observatory (LIGO) could detect gravitational waves from a nearby supernova, and neutrino observatories such as Ice Cube buried in the Antarctic ice could detect the event, as well.

Fortunately for us, we’re safely out of the 50 light-year ‘kill zone’ for receiving any inbound lethal radiation from Betelgeuse: A supernova would simply be a scientifically interesting event, and put on a good show. Ancient supernovae may have had a hand in the evolution of life on Earth, and a recent study suggests that one might even have forced early humans to walk upright.

What would a supernova in Orion look like? Well, using the last supernova in the Large Magellanic Cloud (also a Type IIb event) as a guide, we calculate that when it does blow, Betelgeuse would shine at magnitude -10. That’s 16 times fainter than a full moon, but 100 times brighter than Venus, making it easily visible in the daytime sky. A Betelgeuse-gone-supernova would also easily cast noticeable nighttime shadows.

But see the ongoing fading event for yourself. Betelgeuse is easy to find in December, rising to the east at dusk. In fact, northern hemisphere winter is the very best time for the star to blow, as it’s roughly opposite to the sun, and would dominate the night sky. Summer would be the worst time, as it would tease us from beyond the far side with the sun in the daytime sky.

What’s next? Well, expect Betelgeuse to brighten again in early 2020… though if it rebounds into negative magnitude territory past Rigel and Sirius, well, then things could get really exciting.

For now though, we’re in a wait-and-see-mode for any New Year’s Eve fireworks from Betelgeuse. Such an occurrence would be bittersweet: We would be extraordinarily lucky to see Betelgeuse go supernova in our lifetime… but familiar Orion the Hunter would never look the same again.