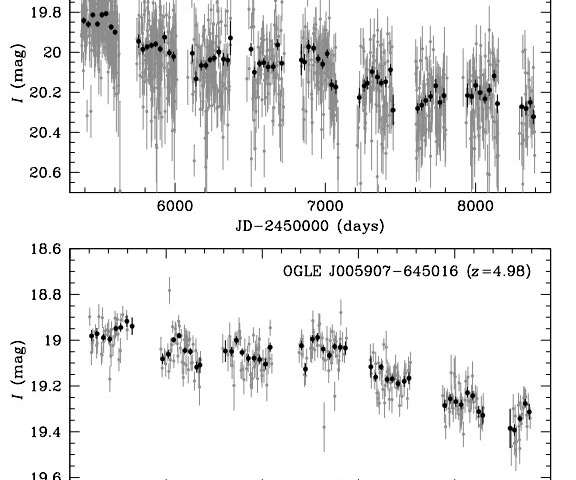 Astronomers report the finding of two new high-redshift quasars using imagery from the Optical Gravitational Lensing Experiment (OGLE). The newly found quasars, designated OGLE J015531−752807 and OGLE J005907−645016, have redshifts of 5.09 and 4.98 respectively. The discovery is detailed in a paper published October 19 on

Quasars, or quasi-stellar objects (QSOs) are extremely luminous active galactic nuclei (AGN) containing supermassive cetral black holes with accretion disks. Their redshifts are measured from the strong spectral lines that dominate their visible and ultraviolet spectra. All observed quasar spectra have redshifts between 0.056 and 7.54.

Astronomers are especially interested in finding new high-redshift quasars as they are the most luminous and most distant compact objects in the observable universe. Spectra of such QSOs can be used to estimate the mass of supermassive black holes that constrain the evolution and formation models of quasars. Therefore, high-redshift quasars could serve as a powerful tool to probe the early universe.

Recently, a team of astronomers led by Szymon Kozłowski of Warsaw University Observatory in Poland has conducted a search for high-redshift quasars in Magellanic Clouds. They analyzed the images from OGLE-IV survey and mid-infrared data collected by NASA’s Wide-field Infrared Survey Explorer (WISE), which resulted in the detection of 33 quasar candidates.

From these candidates, the researchers spectroscopically observed the two most variable ones. Follow-up spectroscopic observations confirmed that these two objects are indeed high-redshift QSOs.

The researchers noted that these values may indicate that an increased variability amplitude exists in the population of high-redshift quasars. However, they added that a larger sample of high-redshift QSOs with a at least decade long light curves is needed to verify this assumption. The list of such objects can be expanded by studying other quasar candidates reported in the paper, or by future observations using the Large Synoptic Survey Telescope (LSST) in Chile, which is expected to become operational in the coming years.

“This variability issue can be resolved by studying variability of a larger AGN sample at z ≈ 5. This is entirely possible now, because we also provide a list of 31 AGN candidates at z ≈ 5, where all of them have nearly a decade long light curves from OGLE. A sample of high-z AGN with a decade-long light curves will be also increased by the Large Synoptic Survey Telescope, providing light curves for sources 3–4 mag fainter than OGLE,” the astronomers concluded.