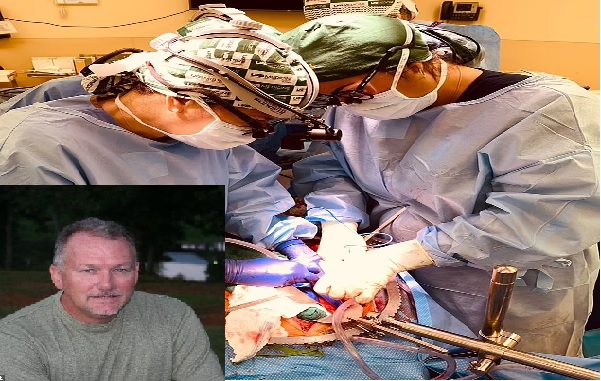 Surgeons have successfully transplanted two pig kidneys into a brain dead human, marking another ‘significant step’ in the decades-long quest to use animal organs for life-saving transplants.

With his family’s blessing, researchers from the University of Alabama at Birmingham performed the pioneering transplant on him just four days later.

Mr Parsons’ own kidneys were removed while his blood still circulating before he was given two organs taken from a genetically-modified pig.

The transplanted pig kidneys filtered blood, produced urine and, importantly, were not immediately rejected by his body. Both organs remained viable for three days after the transplant.

Results demonstrate how xenotransplantation – the transplantation of living cells, tissues or organs from one species to another – could address the worldwide organ shortage crisis.

Pigs’ heart anatomy and physiology is similar to that of humans so they are used as models for developing new treatments.

Earlier this month, David Bennett become the first patient in the world to get a heart transplant from a genetically-modified pig.

This Alabama procedure – which was conducted on September 30, prior to the New York procedure – involved removing Mr Parsons kidneys and inserting the two pig kidneys at the correct place inside his body.

The first peer-reviewed research outlining Mr Parsons’ successful transplant by surgeons at UAB’s Department of Surgery has been published today in the American Journal of Transplantation.

‘This game-changing moment in the history of medicine represents a paradigm shift and a major milestone in the field of xenotransplantation, which is arguably the best solution to the organ shortage crisis,’ said Professor Jayme Locke, director of the Comprehensive Transplant Institute in UAB’s Department of Surgery and lead surgeon for the study.

‘We have bridged critical knowledge gaps and obtained the safety and feasibility data necessary to begin a clinical trial in living humans with end-stage kidney failure disease.

‘This study provides knowledge that could not be generated in animal models and moves us closer to a future where organ supply meets the tremendous need.’

According to The Huntsville Times’ obituary, Mr Parsons’ ‘storytelling, sense of humour and love for his mother and children were unmatched’.

He had a company that installs closets and had a passion for racing dirt bikes, but he was left brain dead due to a bike accident while riding in the woods.

Mr Parsons was declared brain dead – and therefore officially deceased – on September 26, prior to the procedure on September 30.

‘Circulation was maintained initially for the purposes of allocating his organs for transplant and then for our study,’ said Professor Locke.

Something in Your Eyes May Reveal if You’re at Risk of Early Death, Study Shows

Something in Your Eyes May Reveal if You’re at Risk of Early Death, Study Shows