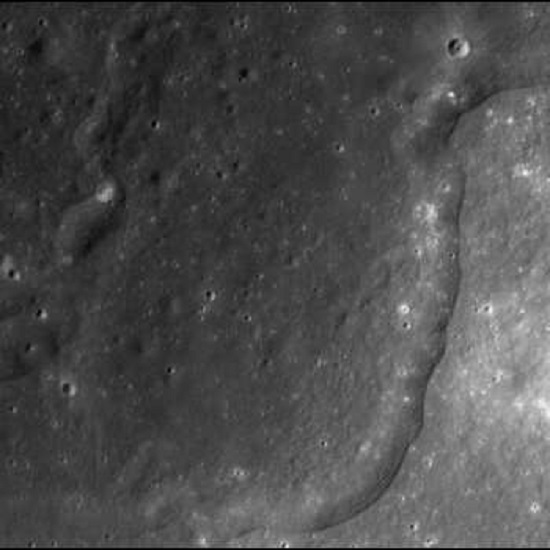 The moon’s largest and oldest impact crater likely doesn’t have minerals from below the lunar crust on its surface, complicating a theory that an ancient massive impact event pierced the Moon’s crust during the crater’s formation, a new study finds.

A study published earlier this year analyzed the way lunar materials reflect light to determine that a basin-forming impact that formed an ancient massive crater, the South Pole-Aitken basin, caused minerals from deep inside the Moon’s mantle to rupture the Moon’s surface. If mantle materials breached the lunar crust, studying them could yield significant clues about the Moon’s history.

Now, new research in the AGU journal Geophysical Research Letters reexamined the same data, acquired by the Chinese spacecraft Chang’E 4’s rover, which landed in the crater in January 2019. The new study finds the crater’s crust mainly consists of a common lunar crustal mineral not detected in earlier analyses. The new results suggest the basin floor may not have exposed lunar mantle material as previously reported.

“We are not seeing the mantle materials at the landing site as expected,” said Hao Zhang, a planetary scientist at the China University of Geosciences, Wuhan, China, and a co-author of the new study.

The new study complicates theories about how the oldest, largest crater on Moon formed, adding to the body of knowledge about the Moon’s history.

The South Pole-Aitken basin is considered one of the largest craters in the Solar System and the oldest on the Moon. The basin is 2,500 kilometers (1,553 miles) in diameter and runs roughly 13 kilometers (8 miles) deep. The basin resides on the Moon’s far side, the enigmatic area facing away from Earth. It was untouched until Chang’E 4’s landing in the crater in January 2019.

Although scientists haven’t radiometrically dated the basin’s age yet, some estimates place its formation at 4.2 billion years ago.

Scientists theorized the South Pole-Aitken basin-forming event ruptured the lunar crust, because of how deep the basin is today. Crustal topographic maps estimate the crust only extends 30 kilometers (19 miles) beneath the crater, whereas the rest of the lunar crust is 40 kilometers (25 miles) thick on average.

The Moon was once covered in molten magma oceans. Over time, these cooled and separated into crust and mantle layers distinguished by many characteristics, including their mineral composition. Clinopyroxene, orthopyroxene, and olivine are all minerals associated with the Moon’s mantle. They occasionally appear on the surface of the Moon, but large concentrations of them in a region could signal that the mantle once punctured the crust.

Spectroscopy is the study of how matter interacts with light. Minerals absorb specific wavelengths of light and color, which gives them unique signatures. Astrophysicists perform different types of spectroscopy to determine the composition and concentration of different materials on planetary bodies and their regions, based on these unique signatures.

Previous research published in May in the journal Nature found concentrations of clinopyroxene, orthopyroxene, and olivine in the crater—amounts high enough to seemingly confirm the theory that the mantle had once breached the crust. The Nature study analyzed spectroscopic soil data from Chang’E 4 and processed the data using a series of functions. This process allowed them to identify the mathematically best fitting mineral for each’s spectra compositions.

Zhang and his colleagues also analyzed spectroscopic data acquired by instruments on Chang’E 4’s rover after the spacecraft landed in the crater. They used a technique that compared the rover’s documented reflections of light and color from the lunar surface to a database of known minerals. The database accounted for minerals’ particle size, the way the minerals interact with light, and how they respond to space weathering—changes to the soil surface caused by solar wind irradiation and bombardment from tiny particles that the Moon’s surface experiences.

This different process allowed the researchers to detect and measure the amount of plagioclase in the crater. Plagioclase is a mineral created from cooling lava. It’s also one of the most common rocks on the Moon’s surface. The results showed plagioclase made up 56-72% of the crater’s composition, making it the majority mineral. The high concentration of plagioclase suggests the lunar crust was not pierced by an ancient impact.

The new study also found the landing site on the crater had concentrations of 9-28% orthopyroxene, 4-19% clinopyroxene, and 2-12% olivine. Although The three minerals are in the basin, they are not present at high enough amounts to prove an impact event once broke the crust, according to the study’s authors.

The new study complicates the certainty of earlier findings and points towards a need for continued research on the far side’s lunar surface, according to Zhang.