New ‘first-of-its-kind footage’ of the Titanic shows the ship’s 200-pound anchor chain, giant portside anchor and a single-ended boiler that fell to the seafloor when the vessel broke in two and sank 12,500 feet below the North Atlantic surface more than 110 years ago.

The video, captured by the diving excursion company OceanGate Expeditions, reveals an ‘astonishing level of detail’ and colors that have not been seen by the human eye since April 12, 1912. 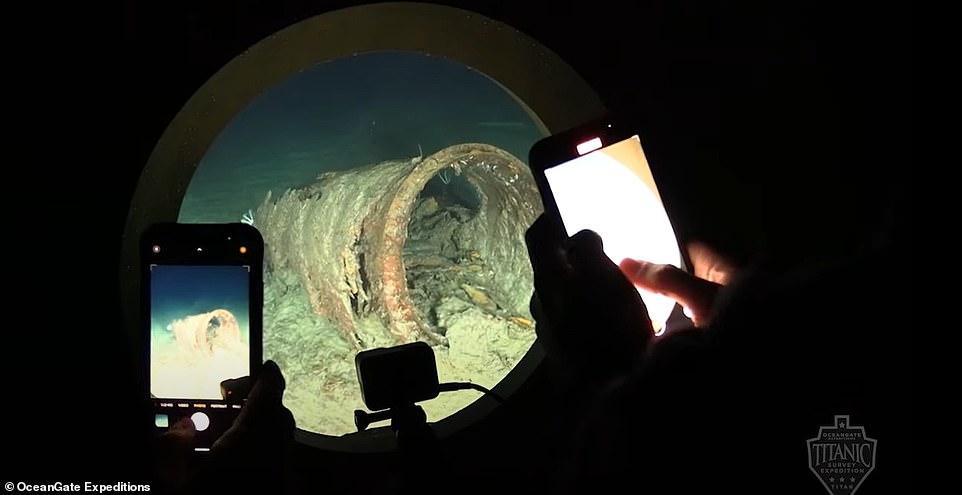 The team filmed the historic vessel in the highest and video resolution so far, roughly 8,000 pixels wide (8k), which allows them to zoom in on specific areas without losing image quality and provides the clearest pictures yet.

It allowed them to see never-before-seen details, such as ‘Noah Hingley & Sons Ltd,’ which is etched on the portside anchor, and offers insight to how the wreck is changing in its watery grave.

The citizen explorers, or mission specialists, began their adventure by sailing on the expedition vessel from St John’s in Newfoundland, Canada, to the site of the Titanic wreckage, located 370 miles away.

OceanGate Expeditions then used its five-manned carbon fiber and titanium Cyclops-class submersible to transport archaeologists and the paying customers to the wreck – the craft takes up to three mission specialists on each dive that lasts eight to 10 hours.

The Titan submersible is outfitted with the latest camera technologies to capture ultra-high-resolution imagery that will help determine the wreck’s rate of decay and assess the marine life that dwells on the wreck. 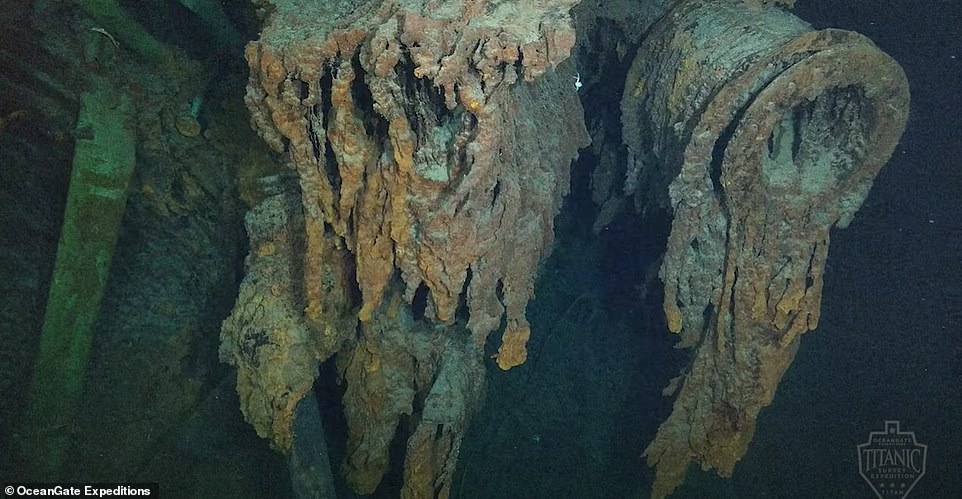 The mission dove deep below the North Atlantic until the lights of the submarine flashed on the monstrous vessel.

The crew was met by ‘the enormous 15-ton anchor still located on the deck of the shipwreck and the shackle that was originally attached to the main mast that has now collapsed,’ PH Nargeolet, Veteran Nautile submersible pilot and Titanic diver, said in a statement.

‘Later in the video you see three round structures along the inside of the railing. These are the triple fairleads that were used to feed the docking ropes to the bollards on shore to secure the ship to the dock when the Titanic was at port,’ Nargeolet continued. 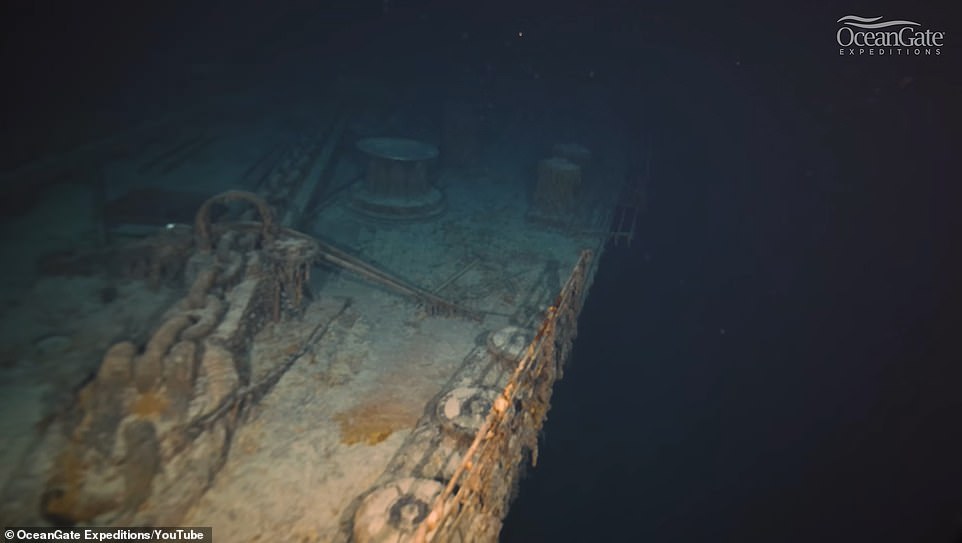 Along in the journey, the divers spotted hull number one, the number one cargo hold and solid bronze capstans, the metal structures used to move heavy weight around by means of ropes, cables or chains.

And these are all being seen for the first time since the Titanic sank to the ocean floor.

Also captured is dramatic evidence of decay where some of the Titanic’s rail has collapsed and fallen away from the ship.

Rory Golden, OceanGate Expeditions Titanic expert and veteran Titanic diver, said in a statement: ‘One of the most amazing clips shows one of the single-ended boilers that fell to the ocean’s floor when the Titanic broke into two.

‘Notably, it was one of the single-ended boilers that was first spotted when the wreck of the Titanic was identified back in 1985.’

Although such trips to the vessel spark excitement, they have also stirred controversy: experts believe salvage missions and other expeditions over the decades — including filmmaker James Cameron’s famed dive in 2001 — have further weakened the integrity of the 108-year-old hull.

The landing of craft on the wreck has caused substantial deterioration to the promenade deck, with some of the more significant damage caused by Cameron’s expedition, during which a submersible collided with the ship’s hull. 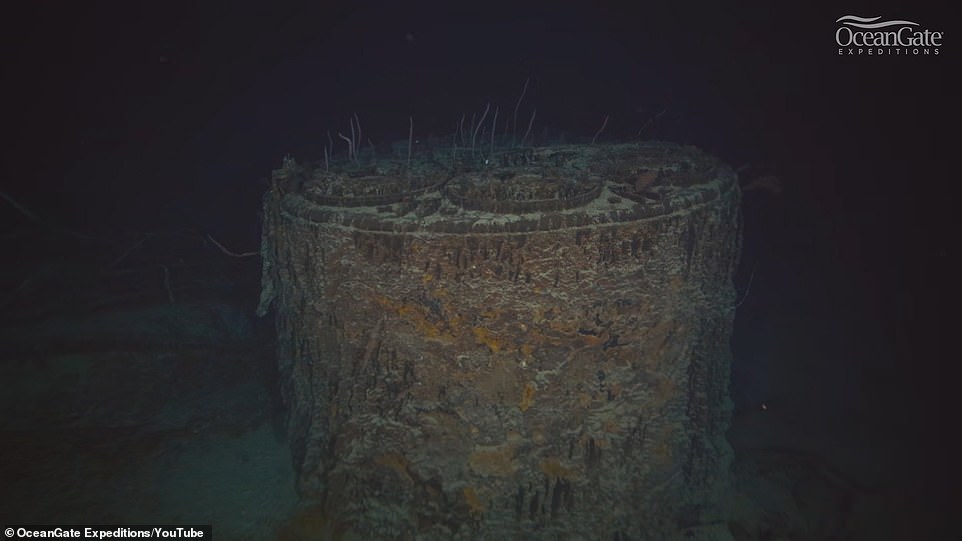 According to the National Oceanic and Atmospheric Administration, the hull and structure of the ship is likely to collapse within the next 40 years.

The Titanic, which was called the ‘unsinkable ship,’ went down on April 14, 1912, four days into her maiden voyage from Southampton, England to New York.

The giant ship collided with an iceberg and in the end, 1,517 of the 2,224 passengers and crew aboard died.

The wreck was discovered 37 years ago some 13,100ft (4,000m) deep at the bottom of the Atlantic, about 400 nautical miles from Newfoundland in Canada.

Mysterious Script From 4000 Years Ago May Finally Be Deciphered