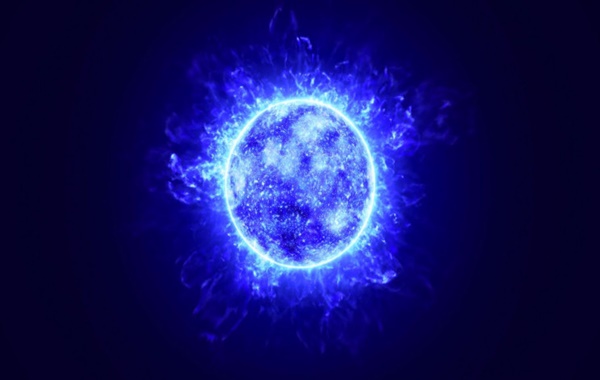 The beginning of everything is coming into focus.

When the universe was very young, roughly 13.7 billion years ago, the very first stars emerged and shone their light upon the dark soupy endless medium of the early cosmos.

And, for the first time, astronomers may have detected evidence of these first stars, which effectively “switched on” the universe, according to a study published in the journal Astrophysical Journal Letters.

And it’s lying just outside of our galaxy.

The first stars cleared the dark, murky soup of the primordial universe

While we haven’t discovered these early stars, called Population III stars, we might have found the closest thing in a dwarf galaxy orbiting the Milky Way: an ancient brown dwarf star. Called A0039, it exists in the Sculptor dwarf spheroidal galaxy 290,000 light-years away, and possesses a chemical makeup that suggests its origins lie in the death of Pop III stars, which went hypernova. The recent study saw Astronomer Ása Skúladóttir from Italy’s University of Florence lead an investigation that found the brown dwarf possessed both the lowest metallicity of any star found beyond our galaxy, but also that it holds less carbon than any star ever seen before. If these findings are verified, AS0039 might become a crucial step in understanding how the universe’s lights were “switched on.”

“We are in the presence of a secondary star with exceptional chemical characteristics: Low in iron, AS0039 is not even rich in carbon and has an extremely low amount of magnesium compared to other heavier elements, such as calcium,” said Skúladóttir, in a press release from the university translated via Google. Astronomers are fairly confident about how the universe congealed out of the messy remains of the Big Bang, to achieve its current glory, but the farthest edges of space-time are not easy to reach with modern-day telescopes. The initial several million years following the Big Bang saw all of space filled with a hot, murky gas that obscured any objects. But, once the first stars formed, their ultraviolet light ionized the gas, and cleared space, allowing cosmic light to shine through for the first time.

In this modern age of the cosmos, star formations have helped us understand how Pop III stars came into being. But spotting them, or at least their immediate traces, could help astronomers build a more thorough picture of this bizarre era in the universe, when the future of everything began to unfold. Out of the primordial murkiness of the early universe, the first stars were composed of very few heavy elements. This is because the soupy medium from which they formed was made of mostly helium and hydrogen. But the immense gravitational force of the first stars enabled the fusion of atomic nuclei into heavier and heavier elements, down through the cosmic generations of middle stars, until iron swirled around our solar system, and filled the Earth.

The heavier elements were primarily formed from highly energetic events like supernovae, and, once forged, they were sucked up in the formation of later generations of stars. This means that stars whose composition is lacking in metals could be extremely old, from a time when metals had yet to form at the core of massive stars. And A0039S is very low in metals, as is its host galaxy, with a mere 4% of the carbon abundance of the Milky Way, speaking proportionally. This, along with other data, points to the possibility that the brown dwarf is from one of the earliest stars, closer to the first ones than any other solar body yet discovered.