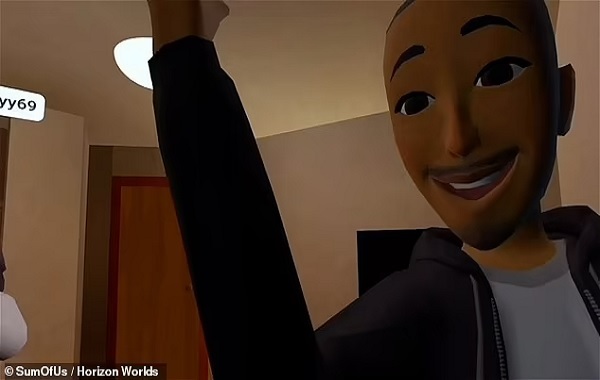 About an hour into using the platform, her avatar was sexually assaulted

One avatar ‘virtually raped’ her avatar, while another ‘watched’

woman was ‘virtually raped’ by a stranger in Meta’s Horizon Worlds metaverse app while another user ‘watched and passed around a bottle of vodka’, a new report claims.

SumOfUs, a non-profit that campaigns to curb the growing power of corporations, sent a 21-year-old researcher into the virtual world this month.

About an hour into using the platform, her avatar was sexually assaulted during a ‘disorientating and confusing experience’.

The researcher, who is unnamed, said: ‘It happened so fast I kind of disassociated. One part of my brain was like wtf is happening, the other part was like this isn’t a real body, and another part was like, this is important research.’

Speaking to MailOnline, a Meta spokesperson highlighted that the researcher did not have the Personal Boundary feature on – a safety tool that’s turned on by default and prevents non-friends from coming within four feet of your avatar.

‘In Horizon Worlds, Personal Boundary is default on at almost 4ft for non-friends to make it easier to avoid unwanted interactions,’ the spokesperson said.

‘We don’t recommend turning off the safety feature with people you do not know.’

Horizon Worlds was released by Meta in December, and allows users to gather with others, play games and build their own virtual worlds.

In a new report released this week, titled ‘Metaverse: another cesspool of toxic content’, SumOfUs details what happened when a young researcher tested the app using an Oculus headset.

The researcher went in with a female-appearing and female-sounding avatar, and was sexually assaulted within an hour, according to the report.

While Meta’s Personal Boundary setting is on by default, the researcher decided to turn this off, having been encouraged by another user.

‘A SumOfUs researcher was led into a private room at a party where she was raped by a user who kept telling her to turn around so he could do it from behind while users outside the window could see – all while another user in the room watched and passed around a vodka bottle,’ the report reads.

With Personal Boundary disabled, the other avatars were able to virtually touch the researcher’s avatar, causing her hand controllers to vibrate, ‘creating a very disorienting and even disturbing physical experience.’

Meta highlights that it has several tools to help people stay safe while in virtual reality.

This includes a Safe Zone button, which lets you block people who are bothering you, as well as the ability to report people or content.

‘We want everyone using our products to have a good experience and easily find the tools that can help in situations like these, so we can investigate and take action,’ the Meta spokesperson said.

However, experts have previously criticised Meta’s attitude to safety in the metaverse.

Speaking to Technology Review following a similar incident in December, Katherine Cross, a researcher in online harassment at the University of Washington, said: ‘Generally speaking, when companies address online abuse, their solution is to outsource it to the user and say, “Here, we give you the power to take care of yourselves”.

‘At the end of the day, the nature of virtual-reality spaces is such that it is designed to trick the user into thinking they are physically in a certain space, that their every bodily action is occurring in a 3D environment.

‘It’s part of the reason why emotional reactions can be stronger in that space, and why VR triggers the same internal nervous system and psychological responses.’

While being groped in the virtual world is generally deemed less serious than in the physical world, the point is it’s just another form of sexual harassment, according to another expert.

‘I think people should keep in mind that sexual harassment has never had to be a physical thing,’ said Professor Jesse Fox, a researcher of new technologies at Ohio State University, told Technology Review.

‘It can be verbal, and yes, it can be a virtual experience as well.’