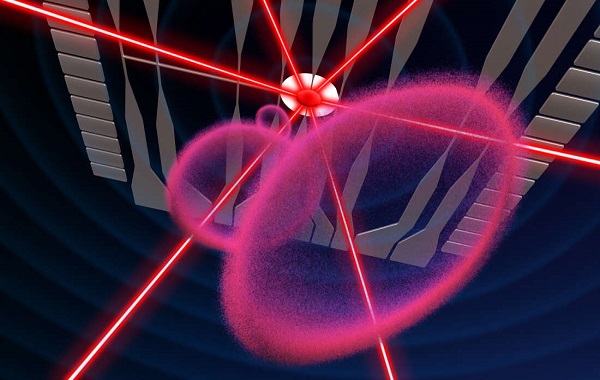 On the International Space Station (ISS), there is a device not much bigger than a minifridge. Inside, researchers have been able to remotely create bubbles at almost absolute zero that could in the future be used to explore the fifth state of matter. This achievement is pretty momentous. There’s no way to create them here on Earth.

Gravitational effects on Earth tend to compress these potential bubbles into something that looks like a contact lens, but thanks to the continuous free-fall of an orbital experiment, gravity can be ignored on the ISS – where NASA’s Cold Atom Lab, the first quantum physics facility in space, resides – and these peculiar structures can be formed.

A new study published in Nature details the creation of these bubbles from gas cooled to just one-millionth of a degree above absolute zero, the coldest temperature allowed in the universe. Incredibly, researchers in California can operate the Cold Atom Lab – the coldest known place in space – from Earth without astronaut assistance.

“These are not like your average soap bubbles,” David Aveline, from the Cold Atom Lab science team at NASA’s Jet Propulsion Laboratory, said in a statement. “Nothing that we know of in nature gets as cold as the atomic gases produced in Cold Atom Lab. So we start with this very unique gas and study how it behaves when shaped into fundamentally different geometries. And, historically, when a material is manipulated in this way, very interesting physics can emerge, as well as new applications.”

They started with small blobs of this ultracold gas, which are then expanded into thin bubbles. The largest are about 1 millimeter in diameter with a shell 1 micron thick. That means that the shell is about one 1,000th of the bubble’s size. About 1,000 atoms make up this bubble. The same volume of air on Earth would have a billion trillion molecules in it.

“The next step is to transition the gas to a different phase of matter known as Bose-Einstein condensate or BEC. BEC is often referred to as the fifth state of matter and when substances are in BEC they exhibit quantum behaviors to a scale visible to the naked eye. Remarkable behaviors can be witnessed in these systems and creating them in space opens a whole new way to study them.

“Our primary goal with Cold Atom Lab is fundamental research – we want to use the unique space environment of the space station to explore the quantum nature of matter,” said Jason Williams, project scientist for Cold Atom Lab. “Studying ultracold atoms in new geometries is a perfect example of that.”

Fundamental physics research is not done with applications in mind, but revolutionary technologies seem to be a natural consequence. Electronics, lasers, and even the World Wide Web are consequences of our search for answers to the deepest mysteries of nature.