Last week, scientists revealed to the world the first image of our galaxy’s supermassive black hole, Sagittarius A*.

It is the second snapshot of a black hole by the Event Horizon Telescope (EHT) team, which also revealed a picture of MH7* in 2019.

One of the leading scientists behind the new breakthrough, Dimitrios Psaltis, professor of astronomy and physics at the University of Arizona, has revealed how the new image proved one of Einstein’s predictions from his theory of gravity.

It’s all down to the striking similarity between Sgr A* and MH7*, despite their massive difference in size — Sgr A*, which has a mass 4 million times greater than that of our Sun, is more than one thousand times smaller than M87*.

The black hole observations were made thanks to more than 300 international scientists, support personnel, and eight radio observatories worldwide. However, they may not have been possible were it not for a groundbreaking paper published in the year 2000 by EHT Science Council members Feryal Özel and Dimitrios Psaltis, both from the University of Arizona.

The new image of Sgr A* has proved one of the most fundamental predictions of Einstein’s theory of gravity, Psaltis explained in a statement from the University of Arizona. Namely, the new data proves that the image of a black hole scales only with its mass. So, in other words, a black hole 1,000 times smaller in mass will look very similar; the only really discernible difference will be the size. 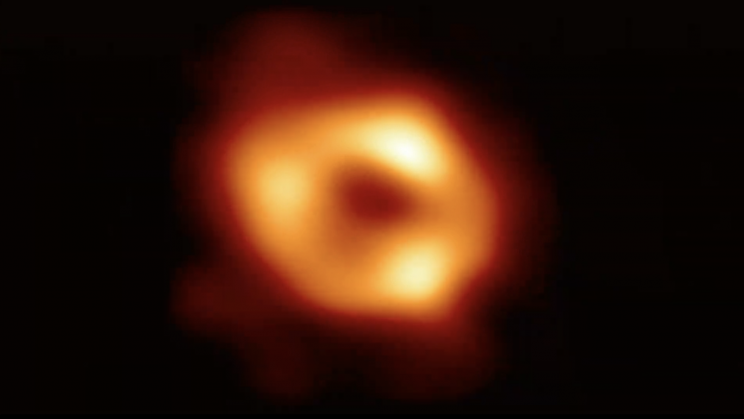 “In general, small things typically look very different from big things, and that’s no coincidence,” Psaltis said. “There is a good reason an ant and an elephant look very different, as one has a lot more mass to support than the other.”

This is due to nature’s law of scale, which dictates that when two entities are vastly different in size, they usually look very different to one another. Black holes, however, scale while looking very much the same.

So, as Psaltis puts it, comparing the new image of Sgr A* to the 2019 image of M87* confirms Einstein’s theory that black holes appear to be the only objects in existence that only answer to a single law of nature — gravity. “The fact that the light appears like a ring, with the black shadow inside, tells you it’s purely gravity,” Psaltis said. “It’s all predicted by Einstein’s theory of general relativity, the only theory in the cosmos that does not care about scale.”

The universe is full of almost identical ‘donuts’

Now that we can see Sgr A* and M87*, the EHT team will continue to image and even take videos of black holes in order to gain a better understanding of the cosmic giants and reveal more of their mysterious behaviors to the world.

Psaltis says that “wherever we look, we should see donuts, and they all should look more or less the same.”

“The reason this is important – besides the fact that it confirms our prediction – is that nobody likes it,” he continued. “In physics, we tend to dislike a world where things don’t have an anchor point, a defined scale.”