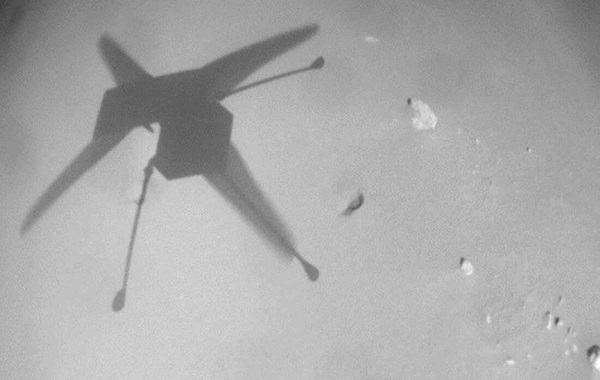 There’s a party on Mars right now, and all the planet’s rotorcrafts (one) are celebrating as Ingenuity clocked a record flight on the Red Planet. Flying farther and faster than ever before, the plucky helicopter (recently spotted from space) has pinged back a video so that we mere Earthlings may experience what it looks like to blast off from the surface of Mars.

“For our record-breaking flight, Ingenuity’s downward-looking navigation camera provided us with a breathtaking sense of what it would feel like gliding 33 feet above the surface of Mars at 12 miles per hour,” said Ingenuity team lead Teddy Tzanetos of NASA’s Jet Propulsion Laboratory in Southern California in a statement.

Ingenuity zoomed to an altitude of 10 meters (33 feet) and, as it heads southwest, reaches its maximum speed within three seconds. Notable landmarks on the Martian landscape below include a series of sand ripples followed by rock fields, before finishing on a landing-friendly stretch of flat, featureless terrain.

While it was Ingenuity’s fastest flight on Mars, the real-time speed was about five times slower than that shown in the video, which has been sped up, reducing the total flight time of 161.3 seconds to under 35 seconds. In that time, it soars 704 meters (2,310 feet) across Mars at around 5.5 meters per second (12 miles per hour), which in Earth terms is twice as fast as an American crocodile’s swimming speed.

The record-breaking flight took place on April 8, Ingenuity’s 25th in almost a year since first taking off on Mars back in April 2021. Much to celebrate, then – but there is work to be done, as Ingenuity is now preparing for its 29th flight.

While it might look like a remote-controlled vehicle, these flights are actually performed autonomously by Ingenuity. However, the flight plan is devised by “pilots” at JPL who ping them up to the Perseverance Mars rover that then relays them to the Ingenuity helicopter.

Once in the air, Ingenuity can use its onboard sensors and flight computer to monitor and respond to both the landscape and the flight’s progression. A small blip with its power recently put the helicopter out of touch with mission control, but with its solar array sufficiently charging again, we can look forward to more footage like this from everyone’s favorite Mars helicopter.