Water is the one thing all life on Earth needs, and the cycle of rain to river to ocean to rain is an essential part of what keeps our planet’s climate stable and hospitable. When scientists talk about where to search for signs of life throughout the galaxy, planets with water are always at the top of the list.

A new study published in Science suggests that many more planets may have large amounts of water than previously thought—as much as half water and half rock. The catch? All that water is probably embedded in the rock, rather than flowing as oceans or rivers on the surface.

“It was a surprise to see evidence for so many water worlds orbiting the most common type of star in the galaxy,” said Rafael Luque, first author on the new paper and a postdoctoral researcher at the University of Chicago. “It has enormous consequences for the search for habitable planets.”

Thanks to better telescope instruments, scientists are finding signs of more and more planets in distant solar systems. A larger sample size helps scientists identify demographic patterns—similar to how looking at the population of an entire town can reveal trends that are hard to see at an individual level.

Luque, along with co-author Enric Pallé of the Institute of Astrophysics of the Canary Islands and the University of La Laguna, decided to take a population-level look at a group of planets that are seen around a type of star called an M-dwarf. These stars are the most common stars we see around us in the galaxy, and scientists have cataloged dozens of planets around them so far. 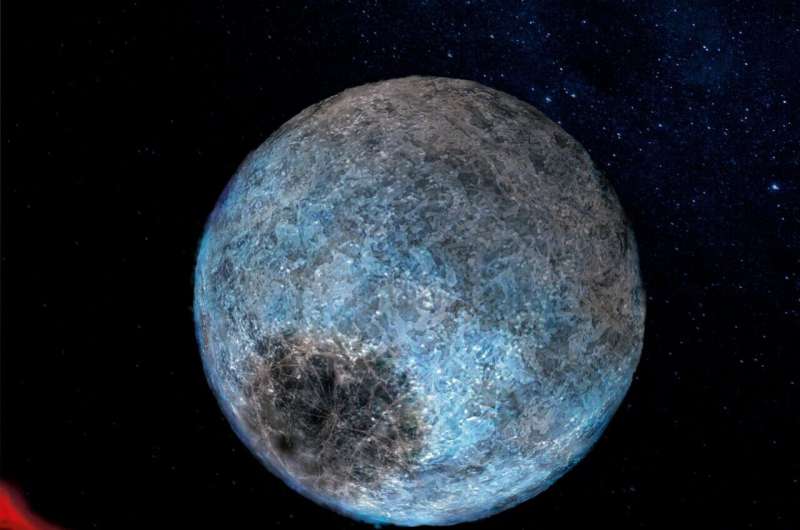 But because stars are so much brighter than their planets, we cannot see the actual planets themselves. Instead, scientists detect faint signs of the planets’ effects on their stars—the shadow created when a planet crosses in front of its star, or the tiny tug on a star’s motion as a planet orbits. That means many questions remain about what these planets actually look like.

By combining the two measurements, scientists can get a sense of the makeup of the planet. Perhaps it’s a big-but-airy planet made mostly out of gas like Jupiter, or a small, dense, rocky planet like Earth.

These analyses had been done for individual planets, but much more rarely for the entire known population of such planets in the Milky Way galaxy. As the scientists looked at the numbers—43 planets in all—they saw a surprising picture emerging.

The densities of a large percentage of the planets suggested that they were too light for their size to be made up of pure rock. Instead, these planets are probably something like half rock and half water, or another lighter molecule. Imagine the difference between picking up a bowling ball and a soccer ball: they’re roughly the same size, but one is made up of much lighter material.

It may be tempting to imagine these planets like something out of Kevin Costner’s Waterworld: entirely covered in deep oceans. However, these planets are so close to their suns that any water on the surface would exist in a supercritical gaseous phase, which would enlarge their radius. “But we don’t see that in the samples,” explained Luque. “That suggests the water is not in the form of surface ocean.”

Instead, the water could exist mixed into the rock or in pockets below the surface. Those conditions would be similar to Jupiter’s moon Europa, which is thought to have liquid water underground.

“I was shocked when I saw this analysis—I and a lot of people in the field assumed these were all dry, rocky planets,” said UChicago exoplanet scientist Jacob Bean, whose group Luque has joined to conduct further analyses.

The finding matches a theory of exoplanet formation that had fallen out of favor in the past few years, which suggested that many planets form farther out in their solar systems and migrate inward over time. Imagine clumps of rock and ice forming together in the cold conditions far from a star, and then being pulled slowly inward by the star’s gravity.

Though the evidence is compelling, Bean said he and the other scientists would still like to see “smoking gun proof” that one of these planets is a water world. That’s something the scientists are hoping to do with JWST, NASA’s newly launched space telescope that is the successor to Hubble.