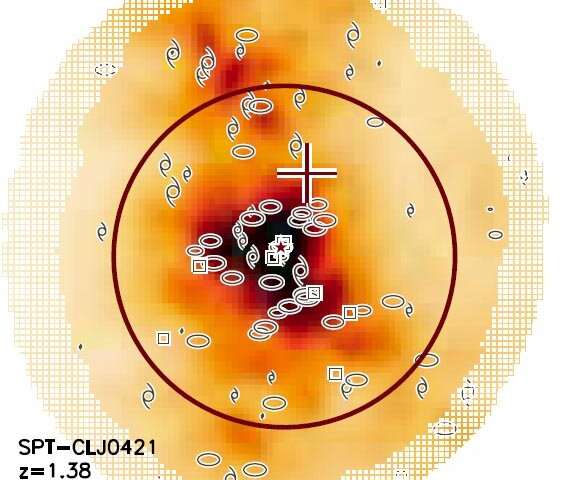 Massive clusters of galaxies, some with more mass than a hundred Milky Way galaxies, have been detected from cosmic epochs as early as about three billion years after the big bang. Their ongoing star formation makes them bright enough to be detected at these distances. These kinds of clusters were predicted by simulations of cosmological evolution but their properties are very uncertain. Astronomers piecing together the evolution of stars in the universe are particularly interested in these clusters because of their abundance of stars and activity.

Star formation in galaxies is by no means a steady process. Not only can there be bursts of activity, prompted perhaps by a collision with a neighboring galaxy, but the opposite can occur. Star formation can be self- limiting because its massive young stars produce winds and supernovae that can blow apart the natal molecular clouds and disable future star formation. Combined with the disruption induced by jets from an active nuclear supermassive black hole, this disruptive process is called quenching and is thought to be able to bring star formation to a halt. Whether or not this occurs in the early universe, and when and how it proceeds, is a key area of comic research.

CfA astronomers Matt Ashby and Esra Bulbul are members of the South Pole Telescope (SPT) team that discovered and studies massive galaxy clusters in the early universe. They recently completed a follow-up study of star formation and the stellar populations in most distant clusters found in the SPT surveys. Using the IRAC camera on the Spitzer Space Telescope along with the Hubble Space Telescope Wide Field camera, they probed five clusters located in the epoch about 4.5 billion years after the big bang, a time when galaxies in general were particularly active in producing new stars. Clusters of this size are exceedingly rare at these distances, and this is the first such study ever done of them.