Eve, 23, reacted to Wednesday’s announcement by throwing some shade at the company’s latest release.

Together with a photo of a middle-aged man buying exactly the same shirt as the one he was wearing, the Stanford graduate, who is Job’s youngest child reposted a meme from the WallStBets account: ‘Me upgrading from iPhone 13 to iPhone 14 after Apple’s announcement today.’

‘Bro they just be releasing the same thing over and over again,’ wrote one commenter.

‘Apple released the same phone with barely marginal improvements again?’ enquired another as to the meme’s meaning.

‘It’s not the same since it continues costing you more money,’ explained another.

Earlier on Wednesday, Apple gave more details regarding the iPhone 14 which has satellite connectivity that will let users send satellite SOS messages if they’re caught in an emergency without service.

The service launches in November, two months after the new smartphone hits the market on September 16.

iPhone 14 and iPhone 14 Plus, which boasts a 6.7-inch screen, come in five colors: midnight, starlight, blue, purple and red.

Preorders start September 9. iPhone 14 will be available on September 16 and iPhone 14 Plus releases October 7.

Rumors about the tech giant partnering with a satellite internet company surfaced earlier this month, but on Wednesday those speculations became a reality.

‘Since satellites are moving rapidly through space, iPhone will show you where to point to maintain your connection — and avoid obstructions such as mountains and heavy foliage,’ Apple stated on its website.

The company states on its website that once the iPhone is connected to a satellite, it automatically sends a message, your location, Medical ID (if set up) and the amount battery left on your device to the nearest 911 dispatcher.

The tech giant said the smartphone has an ‘amazing new camera system’ with an upgraded 12 megapixel main camera that features a sensor larger than the smartphone’s predecessor.

The smartphones feature a sleek aerospace-grad aluminum design in five finishes, along with updated internal designs for better thermal performance, and the pair have a Ceramic Shield on the front cover that protects the inner workers from spills, water and dust.

Greg Joswiak, Apple’s senior vice president of Worldwide Marketing, said in a statement: ‘Both phones have a powerful new Main camera with a huge leap in low-light performance, advanced connectivity capabilities with 5G and eSIM, and the incredible performance of A15 Bionic, which helps enable even better battery life. All of this, tightly integrated with iOS 16, makes iPhone more essential than ever.’

The camera also has a 49 percent improvement in low-light capture and a new TrueDepth for the front-facing camera that automatically focuses on objects and people within the frame, along with the Ultra Wide camera that captures more of the scene. 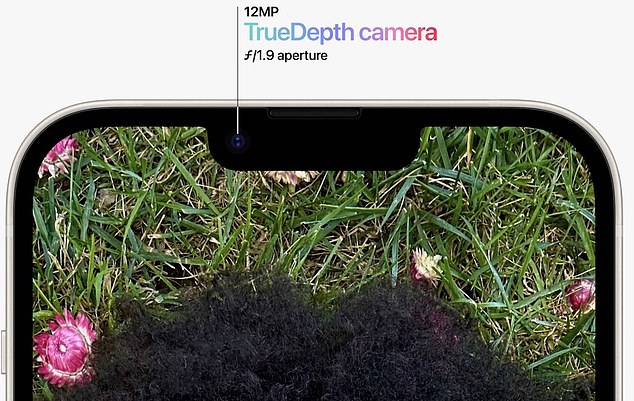 ‘Through a deep integration of hardware and software, Photonic Engine improves mid- to low-light performance for photos across all cameras: up to 2x on the Ultra Wide camera, 2x on the TrueDepth camera, and an impressive 2.5x on the new Main camera,’ shared Apple.

‘Photonic Engine enables this dramatic increase in quality by applying the computational benefits of Deep Fusion earlier in the imaging process to deliver extraordinary detail, and preserve subtle textures, provide better color, and maintain more information in a photo.’

The video system also received an upgrade with ‘action’ mode, which keeps the video footage stable even when you are shaky.

Apple enthusiasts also saw the new iPhone 14 Pro and iPhone 14 Max that uses even more of the front screen by display information on the notch and the TrueDepth camera is much smaller.

These smartphones feature the company’s new A16 chip which is faster than the A15 chip but uses less battery power.

iPhone 14 Pro’s camera is 65 percent larger than the iPhone 13 Pro’s and features sensors that allow it to take pictures twice as better in low light than its predecessor.

CEO Tim Cook said the iPhone 14 Pro and iPhone 14 Max are the best smartphones Apple has ever made.