In the Temple of Khnum at Esna, Upper Egypt, German and Egyptian researchers have uncovered a series of vibrantly-colored ceiling frescoes. The relief images in the central section of the ceiling, Professor Christian Leitz from the University of Tübingen reports, make up a total of 46 depictions of the Upper-Egyptian vulture goddess Nekhbet and the Lower-Egyptian serpent goddess Wadjet. Both are depicted as vultures with outspread wings. While Nekhbet bears the head of a vulture and the white crown of Upper Egypt, Wadjet can be recognized by the Lower-Egyptian crown topped with a cobra.

Researchers from the Institute for Ancient Near Eastern Studies at the University of Tübingen and the Egyptian Ministry of Tourism and Antiquities (led by Dr. Hisham el-Leithy) have been working since 2018 to uncover the reliefs, painting and inscriptions in the temple and once more reveal their original colors.

“Temples and ancient depictions of the gods were often painted in brilliant colors, but these have usually faded or even disappeared totally as a result of external influences,” says Leitz. In the Temple of Khnum at Esna, the colors have been covered by a coating of dirt and soot for almost 2,000 years, and this has helped to conserve them.

The glory of the color used in the depictions of the “Two Ladies,” Nekhbet and Wadjet, which has now been revealed was previously unknown to experts. “From the 1950s, the French Egyptologist Serge Sauneron systematically documented the Temple of Khnum at Esna and the paintings that were visible at that time,” says Tübingen scientist Dr. Daniel von Recklinghausen, “The temple’s complete range of images is unique in its wealth of figures and the state of preservation of the colors.” 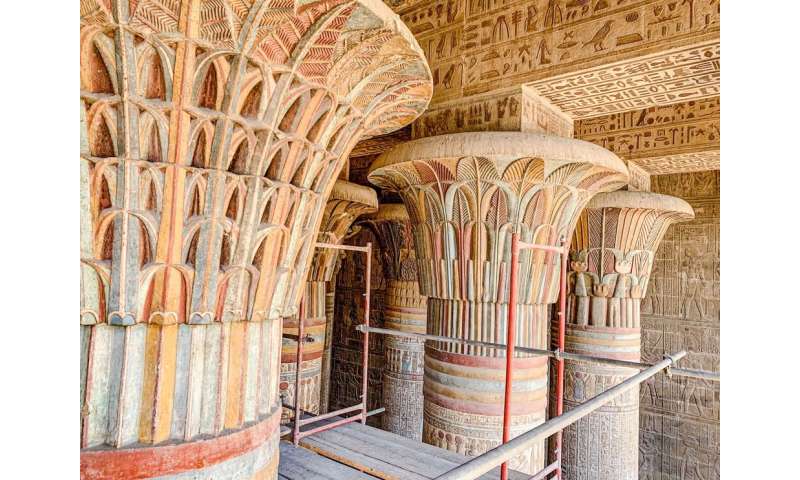 More than half of the ceilings and eight of the 18 columns have now been cleaned, conserved and documented by a team headed by Ahmed Emam. In addition, the two architraves—horizontal beams that support the superstructure—of the central section of the ceiling have been cleaned of soot.

“For the first time we can see all the decorative elements in relation to one another,” says Christian Leitz. “This was impossible simply with Sauneron’s publication.” The Tübingen Egyptologist is currently planning a translation of all the Esna inscriptions, and is also studying the connections between the various inscriptions and the depictions in the interior of the temple. 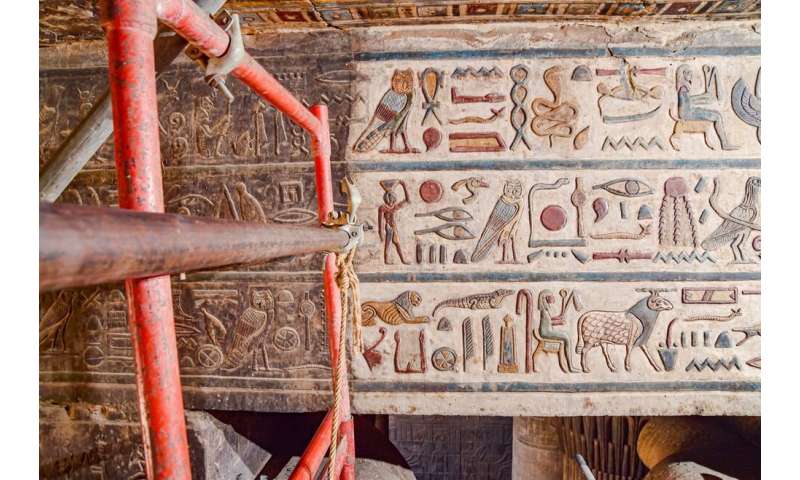 Only the vestibule (known as a “pronaos”) remains of the temple at Esna, 60 kilometers south of Luxor, but it is complete: Measuring 37 meters in length, 20 meters in width and 15 meters in height, the sandstone construction was set before the actual temple no later than the time of the Roman Emperor Claudius (41–54 CE), and may well have overshadowed it. Its location in the center of the city is a possible reason why the vestibule was preserved and—unlike other buildings—not used as a source of stone for construction during the industrialization of Egypt. As early as Napoleon’s time, the pronaos attracted considerable attention in specialist circles, as it was regarded as the ideal of Ancient Egyptian temple architecture.