Siphonophore is The Longest Animal Ever Discovered 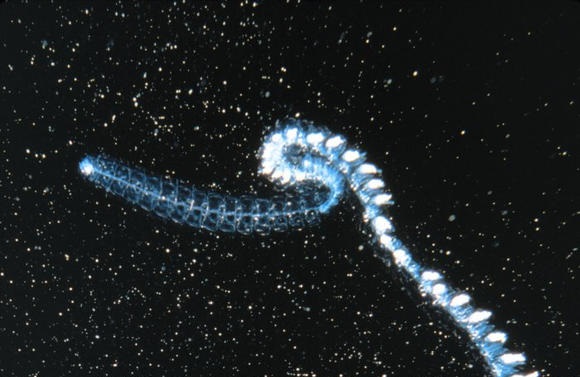 Siphonophore is The Longest Animal Ever Discovered

The longest animal ever recorded is from the deep sea. Marine scientists exploring the Ningaloo Canyons off the coast of Western Australia spotted the longest organism on record. It was found 625 meters beneath the sea.

The marine animal was a giant invertebrate called the siphonophore from the genus Apolemia. The giant siphonophore looked like a long, gelatinous string. The string was more than 120 meters long and was formed by thousands of small, specialized cells called zooids. The zooids make up a functional colony that can eat, reproduce, and moves. Thus, the siphonophore is not an individual organism but a colonial organism.

The colony of organisms clone themselves and then join together to form a long chain. They are similar to jellyfish in that they have stingers that can ensnare and paralyze their prey.

Although the siphonophore discovered in Australian waters was the longest on record, the typical siphonophore grows up to 40 meters and is longer than the blue whale. However, the body of the siphonophore is not large and is described as not much bigger than a broomstick.

Its diet includes small crustaceans, gelatinous animals, fish larvae, and small fishes and its main underwater habitat is a range of 700 to 1000 meters below the waves. They are usually found floating in the water.

Another interesting fact about siphonophores is that almost all of them are bioluminescent and can glow. However, they are difficult to study and can break into pieces when they are disturbed or captured.

Source: Siphonophore is The Longest Animal Ever Discovered

Thousands of years ago, across the Eastern Mediterranean, multiple Bronze Age civilizations took a distinct turn for the worse at around the same time.

The Old Kingdom of Egypt and the Akkadian Empire both collapsed, and there was a widespread societal crisis across the Ancient Near East and the Aegean, manifesting as declining populations, destruction, reduced trade, and significant cultural changes.

One thought on “Siphonophore is The Longest Animal Ever Discovered”