An underwater volcano that looks like the ‘Eye of Sauron’ — the fiery manifestation of the evil dark lord from the Lord of the Rings films — has been found off of the coast of Australia.

Aboard the research vessel Investigator, the team detected the eye-lookalike at a depth of 10,171 feet below sea level, some 174 miles southeast of Christmas Island.

Scans revealed the volcano as an oval shaped depression 3.9 by 3 miles across, with a 984 foot-high rim resembling eyelids and a similarly-sized central peak like a pupil.

To the south of the ‘eye’, the team also found a sea mountain covered in volcanic cones and, beyond that, a larger, flat-topped seamount covered in pumice.

In keeping with their theme, they have dubbed them Barad-dûr (the ‘Dark Fortress’ capped by Sauron’s eye in the film trilogy) and Ered Lithui (‘Ash Mountains’).

The Lord of the Rings trilogy was published by writer J.R.R. Tolkien between 1954–55 and adapted into films by the director Peter Jackson in the early 2000s.

‘The Eye of Sauron, Barad-dûr, and Ered Lithui are part of the Karma cluster of seamounts that have been previously estimated by geologists to be more than 100 million years old,’ wrote voyage member Tim O’Hara in The Conversation.

These, the Museums Victoria marine biologist added, ‘formed next to an ancient sea ridge from a time when Australia was situated much further south, near Antarctica.’

‘The flat summit of Ered Lithui was formed by wave erosion when the seamount protruded above the sea surface, before the heavy seamount slowly sank back down into the soft ocean seafloor.’

In the present day, he explained, the summit of ‘Ered Lithui’ now lies some 1.6 miles beneath the surface of the Indian Ocean.’

The volcanic ‘eye’, Dr O’Hara explains, represents something of a geological conundrum — as its caldera (volcanic crater) ‘looks surprisingly fresh for a structure that should be more than 100 million years old.’

In contrast, he noted, the summit of Ered Lithui is draped in some 300 feet of mud and sand layers that formed from the remains of dead sea creatures sinking down to the seafloor over the course of millions of years.

This same rate of sediment accumulation should have partially smothered the caldera, Dr O’Hara noted, adding: ‘Instead it is possible that volcanoes have continued to sprout or new ones formed long after the original foundation. Our restless Earth is never still.’

Despite this geological activity, the team found that Ered Lithui — quite unlike its inhospitable fictional counterpart — is teeming with life.

The mission spotted brittle-stars, sea-stars, crabs and worms moving around the sandy surface, while barnacles, corals, sea-whips and sponges can be found growing atop exposed rocks and cusk-eels and batfish keep an eye out for prey. 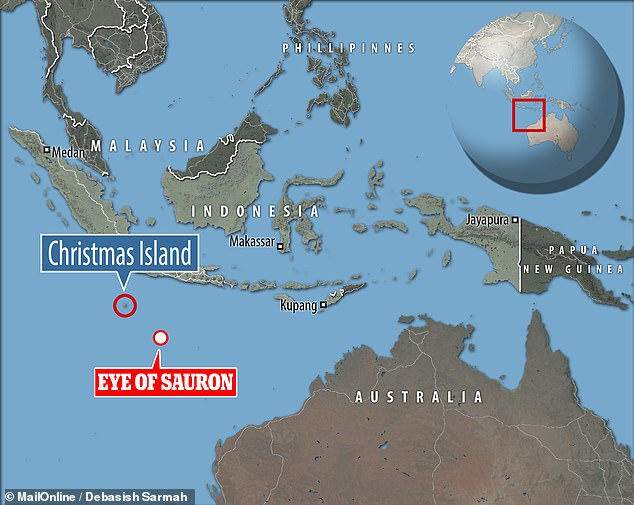 The aim of the RV Investigator’s mission in the Indian Ocean, alongside mapping the seafloor, is also to survey such creatures living in these secluded depths — many of whom will be new to science, it is expected.

‘Our expedition will supply scientific data that will help Parks Australia to manage these areas into the future,’ he added.

The first part of the voyage — the leg to the Christmas Island region — is nearly complete, Dr O’Hara reported. The team will pick up the second leg, venturing further west to the Cocos (Keeling) Islands within the next couple of years.