Scientists Discover a Secret Messenger Between Fat And The Brain

Scientists Discover a Secret Messenger Between Fat And The Brain

Scientists thought they understood how our brains kept tabs on the levels of fat in our bodies: by monitoring fat-associated hormones in our bloodstreams.

But in a new study, researchers now discovered an entire additional messaging system.

It turns out we have a whole sensory system dedicated to carrying messages from our fat tissues (adipose) to our brains.

“The discovery of these neurons suggests for the first time that your brain is actively surveying your fat, rather than just passively receiving messages about it,” says Scripps Research Institute neuroscientist Li Ye.

“The implications of this finding are profound.”

Understanding this system could one day help the growing numbers of us struggling with weight and its associated health problems like heart disease and diabetes.

It adds yet another layer to the already complicated interplay between our genes, environments, diet, and microbiome, which all contribute to our levels of these important insulating energy stores.

While researchers have long known mammalian fat is riddled with neurons, these nerves were linked in animal models to the mammalian sympathetic nervous system – the system governing our body’s automatic, unconscious responses like increasing our heart rate or dilating our eyes.

They promote fat’s breakdown for use during physical activity, hunger, and other stresses.

But while these messages going from the brain to our fat have been established, questions remain about what signaling is happening in the reverse direction within our nerves.

So Wang and colleagues developed the tools, including a new imaging technique called HYBRiD and a targeted cell manipulation method called ROOT to overcome the technical difficulties of reaching neurons deep within our bodies’ fat without messing them up.

The researchers designed HYBRiD (hydrogel reinforced cleared mammalian tissue) to allow close examination of large intact samples of tissue. It uses solvents to remove molecules that give tissues their opaqueness, resulting in transparent tissues still in their original configurations. 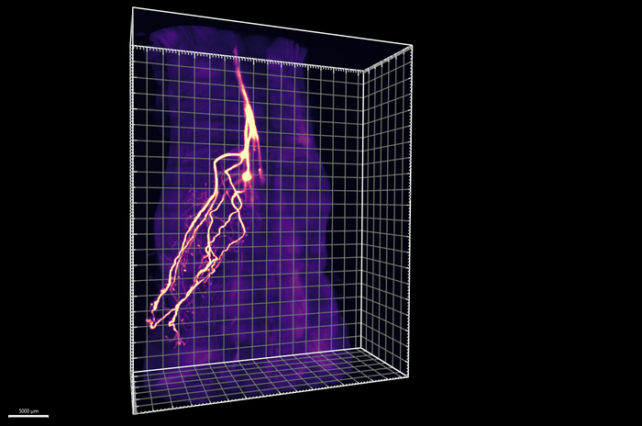 The resulting visualizations allowed Wang and team to clearly see that almost half of the adipose neurons didn’t connect to the sympathetic nervous system but to the sensory nervous system instead.

They then used ROOT (retrograde vector optimized for organ tracing) to selectively target and destroy different subsets of the neurons in mice.

Losing the sensory neuron signal led to more fat in mice, with particularly high levels of brown fat. The mice also had higher body temperatures, which makes sense because brown fat helps our bodies convert other fats and sugar into heat.

The researchers concluded their newly identified sensory neuron system must be acting to regulate the signals from the sympathetic nervous system, instructing the body to burn our fat – turning them down or off.

“This tells us that there’s not just a one-size-fits-all instruction that [the] brain sends adipose tissue,” says Li.

“It’s more nuanced than that; these two types of neurons are acting like a gas pedal and a brake for burning fat.”

The team suspect these nerves might also play a crucial role in interoception – the perceptions of sensation coming from within our bodies, as this is the case with similar neurons found inside other organs. But they’ve yet to look into this, and are keen to investigate this system further.

This research was published in Nature.

Source: Scientists Discover a Secret Messenger Between Fat And The Brain