If an astronaut were to suddenly become adrift in the void of interstellar space, they would be compelled to propel their body to safety, kicking and waving their limbs toward a sanctuary in the vacuum.

Sadly for them, physics isn’t so forgiving, leaving them to float without hope for eternity. If only the Universe was sufficiently curved, their flailing mightn’t be so futile.

Centuries before we left the tug of Earth, Isaac Newton succinctly explained why things moved. Whether it’s the expulsion of gas, a shove against solid ground, or the swish of a fin against a fluid, the momentum of an action is conserved by the sum of the elements involved, resulting in a reaction that drives an object forward.

Take away the air surrounding a bird’s wing or the water around a fish’s tail and the effort of each flap will push equally one way as it pulls the other, leaving the poor animal to flutter feebly without any net movement towards its destination.

Early in the 21st century, physicists considered a loophole to this rule. If a 3D space in which this movement occurs is curved, changes in an object’s shape or position won’t necessarily follow the usual rules on how momentum is exchanged, meaning it wouldn’t need a propellant.

The geometry of curved spacetime itself could mean an object’s deformation – the right kick, flap, or flutter – just might see a subtle net change in its position after all.

On one hand, the idea that the curvature of spacetime holds influence over motion is as obvious as watching a rock fall to the ground. Einstein had that one covered more than a century ago in his general theory of relativity.

But showing how the rolling hills and valleys of distorted space might affect an object’s own ability to self-propel is a whole other ballgame.

To observe this in action without traveling to the nearest space-warping black hole, a team of researchers from the Georgia Institute of Technology, Cornell University, the University of Michigan, and the University of Notre Dame constructed a model of curved space in the lab.

Their mechanical version of a spherical space consisted of a set of masses driven by actuated motors along an arching crossroads of tracks. Attached to a rotating arm, the whole setup was positioned in a way that the pull of gravity and drag of friction would be minimal. 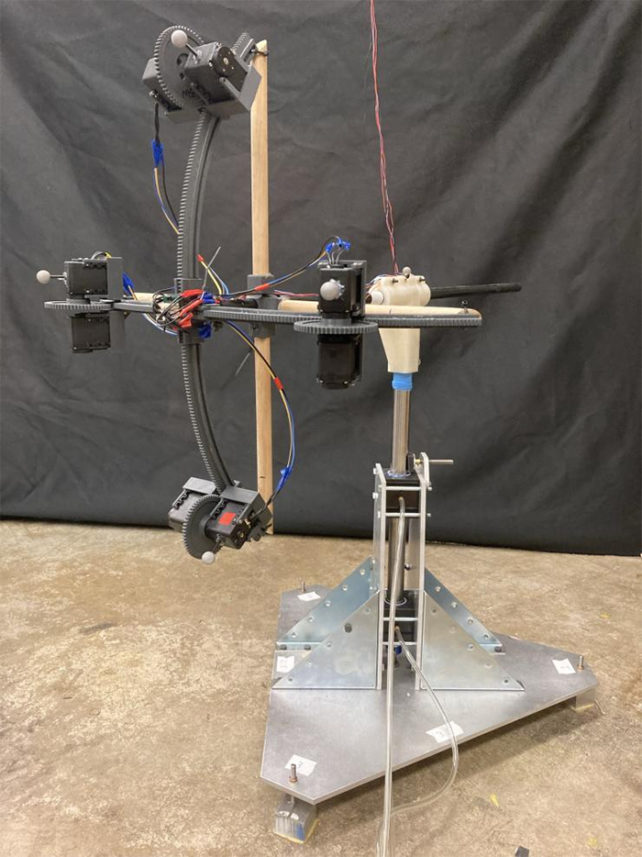 A ‘space’ swimmer motoring on the track of a rotating boom arm. (Georgia Tech)

While the masses weren’t cut off from the physics that dominate our somewhat flatter Universe, the system was balanced so the bend in the tracks would induce the same kind of effect as a significantly curved space. Or so the team predicted.

As the robot moved, the mix of gravity, friction, and curvature combined into a movement with unique properties that were best explained by the geometry of the space.

“We learned that the predicted effect, which was so counter-intuitive it was dismissed by some physicists, indeed occurred: as the robot changed its shape, it inched forward around the sphere in a way that could not be attributed to environmental interactions.”

As small as the effect was, using these experimental results in line with theory could help improve the positioning of technology in localities where the Universe’s curvature becomes important. Even in gentle dips like Earth’s own gravity well, understanding how contained movements might alter ultra-precise positioning in the long term could become increasingly important.

Of course, physicists have been down the road of zero-propellant ‘impossible engines’ before. Small hypothetical forces in experiments have a way of coming and going, generating no end of debate over the validity of the theories behind them.

Further studies with more precise machinery could reveal more insights into the complex effects of swimming over the Universe’s sharp edges.

For now, we can only hope the gentle slope of the void surrounding our poor astronaut is enough to see it reach a safe haven before their oxygen runs out.

In DNA, scientists find solution to building superconductor that could transform technology

In DNA, scientists find solution to building superconductor that could transform technology