Explaining the concept of a dust bunny to small children can be quite amusing. No, it’s not actually alive. It’s moving around because of really small currents of wind that we can’t even see. It’s mainly formed out of dead skin and spider webs. No, the spiders don’t actually eat the dead skin. Most of the time.

Now, take that same concept of a bunch of particles stuck together, scale it up a few orders of magnitude, and put it in space. Though it’s still not alive, it would be blown by solar radiation rather than the winds. And instead of being made out of skin and spider webs, it could be made up of cometary dust particles. That is what scientists think our first detected visitor from another star might be—an interstellar dust bunny.

One of the strangest things about ‘Oumuamua, the first object detected and confirmed to come from outside the solar system, is its shape. The commonly seen artist’s rendering depicts the body as a cigar shape. However, there is the possibility that it is, in fact, more disc-like, as the dimension of depth was unobserved as it passed through our solar system.

‘Oumuamua also had another interesting characteristic—it was accelerating faster than can be explained by gravity. One possible explanation for the acceleration is that the object itself is made entirely of solid hydrogen. Such an object could actually be turned into a type of natural ion engine as it approaches a star. While an interesting concept, there is no evidence to support this theory so far. 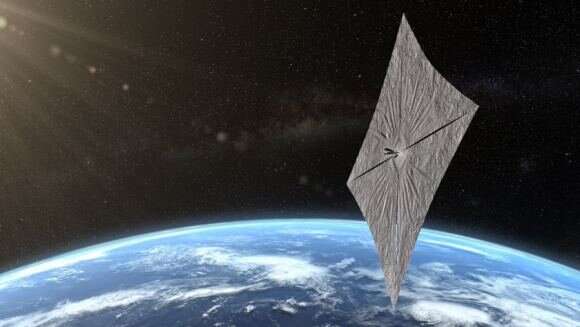 An illustration of Light Sail 2, a human-made light sail, with its solar sails deployed. Credit: Josh Spradling / The Planetary Society

However, it is not the only interesting theory that ‘Oumuamua’s acceleration has spawned. Another possible cause of this non-gravitational acceleration is radiation pressure, a force exerted by sunlight on the object. However, in order for sunlight to be able to accelerate an object, its density would have to be extremely low. The unique shape and extremely low density prompted a flurry of speculation in the scientific community about how the object might have formed. One particularly novel theory was that it was an intelligently designed light sail. As with any scientific theory that involves intelligent aliens, there was probably a more likely explanation.

That explanation was recently put forward by Dr. Jane Luu and her colleagues at the University of Oslo in a new paper published in the Astrophysical Journal Letters. The paper posits the idea that ‘Oumuamua formed as a “fractal” in the coma of an extrasolar Oort cloud comet.

Dr. Luu and her colleagues are actively working on developing the concept of what, exactly, a cometary fractal is and how they form. Their theory is that they form from dust that is blown off of a cometary nucleus. Usually, all it takes to start forming a fractal body is a relatively large bit of rock breaking off the nucleus. This fragmentation process is already well-known in comets in our own solar system. 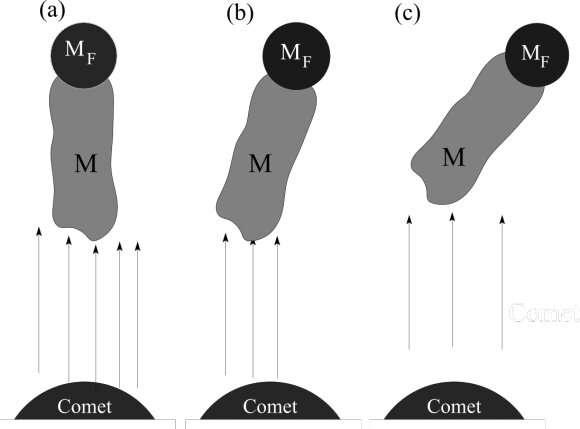 Example of the how dust from a comet might accumulate into a fractal in the tail of a comet. Credit: Jane Luu et all

As the parent comet was likely an Oort cloud comet, also known as a “long-period” comet, the fractal would most likely be on an escape trajectory, heading out of the stellar system. Most short-period comets have much reduced activity due to their many close approaches to their star, and so would most likely not have enough material needed to form a fractal like ‘Oumuamua. But if a fractal managed to form from a short period comet, radiation pressure will eventually break any feeble gravitational bond and send the fractal off into interstellar space, never to rejoin its cometary birthplace.

One example of a long-period comet that might have formed a fractal entered the solar system not long after ‘Oumuamua. Borisov is definitely a comet, and possibly originally had a long period in its original solar. It has shown the process of fragmentation that could have formed the seed for ‘Oumuamua.

Luckily, observing such interstellar visitors is going to become much more common in the near future. Dr. Luu points out that, for the first time in human history, we have a systematic sky survey that provides high-quality images of the whole sky every two to three days. Pan-STARRS, as the project is called, can also see extremely faint objects such as ‘Oumuamua. The efficiency with which the survey images the whole sky is extremely important for such fast-moving objects, as the whole observing window of ‘Oumuamua in the solar system was only a few weeks.

That speed doesn’t dampen the enthusiasm of some who want to catch up to these interstellar objects, though. Scientists recently proposed a plan to visit these objects as they move through the solar system. Dr. Luu agrees that getting a sample from these objects would be wonderful, though she suggests a slightly more traditional approach of simply setting a rocket in orbit to wait for an opportunity to accelerate rapidly toward a newly found interstellar traveler.

There will be plenty of new targets to choose from as Pan-STARRS continues its work. That also means there will be plenty more opportunities to determine if the model Dr. Luu and her colleagues developed for ‘Oumuamua’s formation is a common occurrence in the galaxy, or whether we just happened to be lucky to observe a cometary fractal as our first interstellar visitor. Who knows? Maybe the interstellar fractals we find in the future will be made up partially of spider webs.