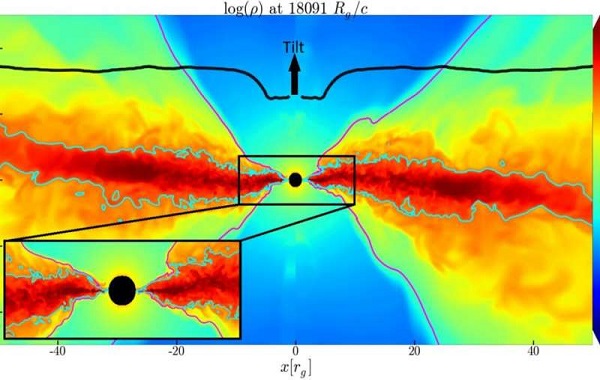 An international team has constructed the most detailed, highest resolution simulation of a black hole to date. The simulation proves theoretical predictions about the nature of accretion disks—the matter that orbits and eventually falls into a black hole—that have never before been seen.

The research will publish on June 5 in the Monthly Notices of the Royal Astronomical Society.

Among the findings, the team of computational astrophysicists from Northwestern University, the University of Amsterdam and the University of Oxford found that the inner-most region of an accretion disk aligns with its black hole’s equator.

This discovery solves a longstanding mystery, originally presented by Nobel Prize-winning physicist John Bardeen and astrophysicist Jacobus Petterson in 1975. At the time, Bardeen and Petterson argued that a spinning black hole would cause the inner region of a tilted accretion disk to align with its black hole’s equatorial plane.

After a decades-long, global race to find the so-called Bardeen-Petterson effect, the team’s simulation found that, whereas the outer region of an accretion disk remains tilted, the disk’s inner region aligns with the black hole. A smooth warp connects the inner and outer regions. The team solved the mystery by thinning the accretion disk to an unprecedented degree and including the magnetized turbulence that causes the disk to accrete. Previous simulations made a substantial simplification by merely approximating the effects of the turbulence.

“This groundbreaking discovery of Bardeen-Petterson alignment brings closure to a problem that has haunted the astrophysics community for more than four decades,” said Northwestern’s Alexander Tchekhovskoy, who co-led the research. “These details around the black hole may seem small, but they enormously impact what happens in the galaxy as a whole. They control how fast the black holes spin and, as a result, what effect black holes have on their entire galaxies.”

Tchekhovskoy is an assistant professor of physics and astronomy in Northwestern’s Weinberg College of Arts and Sciences and a member of CIERA (Center for Interdisciplinary Exploration and Research in Astrophysics), an endowed research center at Northwestern focused on advancing astrophysics studies with an emphasis on interdisciplinary connections. Matthew Liska, a researcher at the University of Amsterdam’s Anton Pannenkoek Institute for Astronomy, is the paper’s first author.

“These simulations not only solve a 40-year-old problem, but they have demonstrated that, contrary to typical thinking, it is possible to simulate the most luminous accretion disks in full general relativity,” Liska said. “This paves the way for a next generation of simulations, which I hope will solve even more important problems surrounding luminous accretion disks.”

“Alignment affects how accretion disks torque their black holes,” Tchekhovskoy said. “So it affects how a black hole’s spin evolves over time and launches outflows that impact the evolution of their host galaxies.”

From Bardeen and Petterson until present day, simulations have been too simplified to find the storied alignment. Two main issues have acted as a barrier for computational astrophysicists. For one, accretion disks come so close to the black hole that they move through warped space-time, which rushes into the black hole at immense speed. Complicating matters further, the black hole’s rotation forces space-time to spin around it. Properly accounting for both of these crucial effects requires general relativity, Albert Einstein’s theory that predicts how objects affect the geometry of space-time around them.

Second, astrophysicists have not had computing power to account for magnetic turbulence, or the stirring inside of the accretion disk. This stirring is what causes the disk’s particles to hold together in a circular shape and what causes gas eventually to fall into the black hole.

“Imagine you have this thin disk. Then, on top of that, you have to resolve the turbulent motions inside the disk,” Tchekhovskoy said. “It becomes a really difficult problem.”

Without being able to resolve these features, computational scientists were unable to simulate realistic black holes.

To develop a code capable of carrying out simulations of titled accretion disks around black holes, Liska and Tchekhovskoy used graphical processing units (GPUs) instead of central processing units (CPUs). Extremely efficient at manipulating computer graphics and image processing, GPUs accelerate the creation of images on a display. They are much more efficient than CPUs for computing algorithms that process large swaths of data.

Tchekhovskoy likens GPUs to 1,000 horses and CPUs to a 1,000-horsepower Ferrari.

“Let’s say you need to move into a new apartment,” he explained. “You will have to make a lot of trips with this powerful Ferrari because it won’t fit many boxes. But if you could put one box on each horse, you could move everything in one go. That’s the GPU. It has a lot of elements, each of which is slower than those in the CPU, but there are so many of them.”

Liska also added a method called adaptive mesh refinement, which uses a dynamic mesh, or grid, that changes and adapts to the flow of movement throughout the simulation. It saves energy and computer power by focusing only on specific blocks in the grid where movement occurs.

The GPUs substantially accelerated the simulation, and the adaptive mesh increased resolution. These improvements allowed the team to simulate the thinnest accretion disk to date, with a height-to-radius ratio of 0.03. When the disk was simulated this thin, the researchers could see alignment occur right next to the black hole.

“The thinnest disks simulated before had a height-to-radius ratio of 0.05, and it turns out that all of the interesting things happen at 0.03,” Tchekhovskoy said.

In a surprise finding, even with these incredibly thin accretion disks, the black hole still emitted powerful jets of particles and radiation.

“Nobody expected jets to be produced by these disks at such slight thicknesses,” Tchekhovskoy said. “People expected that the magnetic fields that produce these jets would just rip through these really thin disks. But there they are. And that actually helps us resolve observational mysteries.”