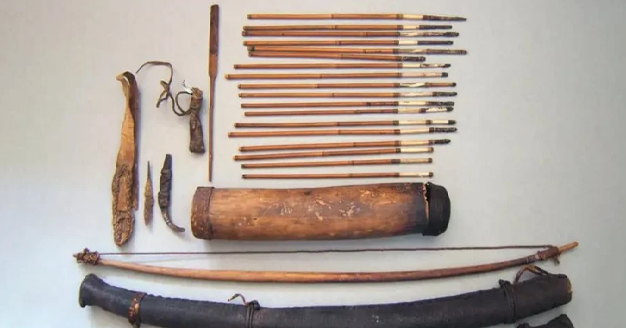 Humans Have Been Making Poison Arrows For Over 70,000 Years, Study Finds

From slaying centaurs to biblical mentions, poison-tipped arrows are a staple of cultural stories in the west. But they’ve also proved highly effective in reality, so much so that indigenous peoples around the world are still making use of them today, to successfully feed themselves and their families.

The Kalahari San of southern Africa hunt with small bone- or iron-tipped arrows that may look quite dainty, but when coated with poison, they also prove quite lethal. The hunter-gatherers daub their weapons with larvae entrails of a beetle called Diamphidia nigroonata. The larvae contain a diamphotoxin poison that is capable of bringing down an adult giraffe.

Some of the earliest solid evidence of poison use is traces of the highly toxic compound ricin on 24,000-year-old wooden applicators, found in South Africa’s Border cave. However, archaeologists have long suspected this hunting technique is much older, and new evidence now suggests humans have been shooting poison arrows through the last 72,000 years.

In a new study, archaeologist Marlize Lombard from the University of Johannesburg in South Africa examined the unique properties of known poison arrows, comparing them to those that don’t rely on poison, by analysing 128 bone pointed arrows.

Arrows that don’t use poison need to deeply pierce the bodies of prey to effectively kill or incapacitate, whereas those laced with poison just need to stab through an animal’s skin to access its bloodstream.

Using a measurement called the tip cross-sectional area (the part of the arrowhead important for both cutting into prey hide and the arrow’s flight dynamics) allowed Lombard to compare arrows through time. She focused her study on bone-tipped arrows because a lot of previous work looked only at stone-tipped arrows, given more of these have been preserved.

Six of the bone-pointed arrows dated as far back as 72,000-80,000 years, from the Blombos Cave in South Africa. Three of these arrows have properties consistent with poisoned arrowheads.

“One is smaller, which if used as an un-poisoned arrowhead would have been ineffective,” Lombard wrote, which would make these the oldest known poison arrows in the world.

The sample size for the oldest arrows is small, and Lombard cautions that such a metric approach to weapons function can only tell us what the weapon had the potential to achieve, rather than the way they were actually used. Other clues are also required to establish probable use.

“When dealing with the human past, numbers alone can seldom reveal the nuances necessary for a deep understanding of techno-behaviours – for that a measure of qualitative assessment and interpretation is required,” she wrote.

Another of the bone points found at Klasies River Mouth in South Africa, older than 60,000 years, was found to have micro-cracks, which are consistent with use as an arrow.  This arrow was also found to have a black residue that Lombard and other researchers suspect is either poison, glue, or even both.

In more recent times, humans have made use of poisons from a large variety of life, including plants, poison dart frogs and even venomous lizards. Today, some of these poisons have the potential to be medically useful.

If Lombard’s findings hold true, they go to show how this ancient human technology became such an effective tool – one that has well and truly stood the test of time.