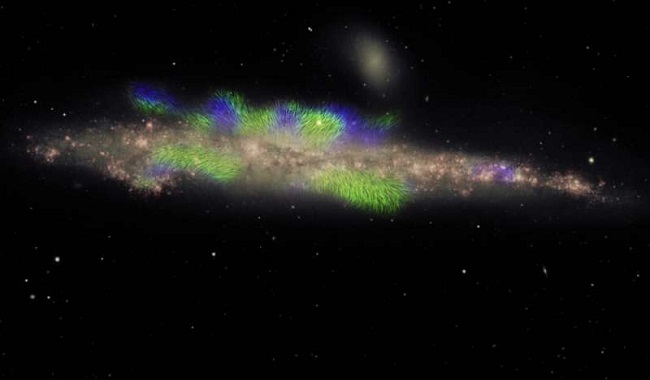 Using the National Science Foundation’s Karl G. Jansky Very Large Array radio telescope, a team of astronomers has captured for the first time an image of large-scale, coherent, magnetic fields in the halo of a faraway spiral galaxy, confirming theoretical modeling of how galaxies generate magnetic fields and potentially increasing knowledge of how galaxies form and evolve.

The international consortium, led by scientists from the Max Planck Institute for Radio Astronomy in Bonn, Germany, and including astronomers from the NSF-funded National Radio Astronomy Observatory in Charlottesville, Virginia, reported the results in the journal Astronomy & Astrophysics.

“To understand how stars like the sun and planets like Earth came to be, we must understand how galaxies, such as our Milky Way, form and evolve,” said Matthew Benacquista, a project director in NSF’s division of Astronomical Sciences. “This project is an attempt to measure galactic magnetic fields and learn how they influence the way that interstellar gases are ejected from galaxy disks and contribute to galaxy formation and evolution.”

The spiral galaxy, identified as NGC 4631 or the “Whale Galaxy,” is seen edge-on in the image, with its disk of stars shown in pink. The field lines are shown in green and blue, extending beyond the disk into the galaxy’s extended halo. Green indicates filaments with their magnetic field pointing roughly toward the viewer, and blue indicates filaments with their magnetic fields pointing away. This phenomenon, with the field alternating in direction, has never been seen before in the halo of a galaxy.