For The First Time, Physicists Created a ‘Fifth’ State of Matter in Space 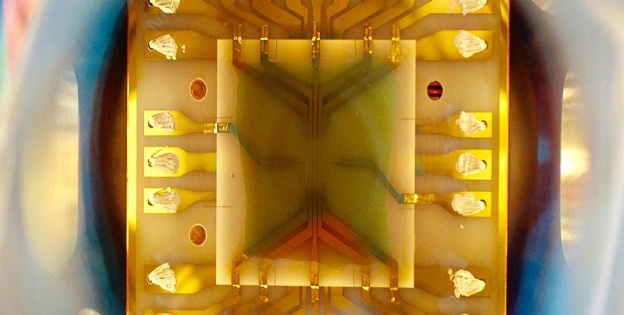 For The First Time, Physicists Created a ‘Fifth’ State of Matter in Space

In January last year, a rocket carrying a tiny chip packed with rubidium-87 atoms was launched more than 200 kilometres (124 miles) above the planet’s surface. The mission was brief, affording just six minutes of microgravity at its height.

But in that time the tiny chip briefly held the record for being the coldest spot in space.

On top of that, German researchers still managed to cram in more than 100 experiments. Their results are set to impact how we will one day study big things in the Universe.

The Matter-Wave Interferometry in Microgravity (MAIUS 1) experiment launched from Kiruna in Sweden was the first of several missions aiming to study a special fifth state of matter called a Bose-Einstein condensate (BEC) under microgravity conditions.

Collections of atoms usually jiggle with energy in such a way that we can theoretically see them as individuals weaving through a crowd.

Once that energy is taken away, they fall into a lull, for all purposes ending up with an identical set of characteristics, or quantum states. Rather than jump to their own beat, they become indistinguishable – a super particle with one identity.

This condensate is incredibly useful for physicists wishing to probe the deeper nature of how particles behave.

Forcing particles to be quiet typically entails holding them in an electromagnetic trap while carefully tuned lasers strike them with perfect timing, a little like hitting a person on a swing in such a way they slow down rather than speed up.

Once the atoms are quiet, the trap can be turned off and the experiment can begin. Just be quick – you need to catch the atom cloud before it drops to the bottom of the container.

Without gravity ruining the party, researchers would have more time to conduct more complicated experiments.

MAIUS 1 is the first attempt to create a BEC in freefall.

Usually, BECs need a room of equipment to cool atoms. So researchers from a number of German institutions had to first work together to miniaturise the setup.

The end result was a small chip containing atoms of rubidium, which could be packed inside a sounding rocket – an unpiloted research vessel – and shot up to a height of 243 kilometres (150 miles).

This is a degree colder than the Boomerang Nebula, which holds the honour of being the chilliest natural object we know of. So for a moment that cloud of rubidium atoms was literally the coldest known thing in space.

For six minutes, the rocket experienced minimal gravity, before accelerating back to Earth. In total, the research team poked and prodded the cloud 110 different ways to gauge how gravity affects the trapping and cooling process, and how this cloud behaves in freefall.

One particular set of experiments they ran could be immensely useful in the emerging study of gravitational waves.

To detect the insanely tiny ripples in spacetime that echo from colliding monsters like black holes and neutron stars, astrophysicists currently split laser beams and recombine them. Discrepancies in their waves show as patterns of interference.

The results from their tests show that BECs could provide another way to detect these waves, and potentially pick up different frequencies to current procedures.

The researchers used a laser to split the cloud into two halves, and then allowed them to recombine. Since they should share the same quantum state – including its wave-like nature – any differences in the two when they merge could in principle indicate an external influence. Such as a change in their gravitational field.

On Earth, there just wouldn’t be enough time to gather accurate readings. In freefall, the BEC could hang around long enough to potentially pick up gravitational waves, at least in theory.

Several months ago, NASA announced their own world first – the creation of a BEC in orbit on board the International Space Station (ISS).

While it wasn’t the first BEC to be created in a low g environment, the ISS’s Cold Atom Laboratory is set to break its own records for duration of ultracold experiments.

And with more MAIUS missions on the horizon, all this ultra-cold research around the world is set to launch us into a new era of space exploration.

One thought on “For The First Time, Physicists Created a ‘Fifth’ State of Matter in Space”