Australian bees are known for pollinating plants on beautiful sunny days, but a new study has identified two species that have adapted their vision for night-time conditions for the first time.

The study by a team of ecology researchers has observed night time foraging behaviour by a nomiine (Reepenia bituberculata) and masked (Meroglossa gemmata) bee species, with both developing enlarged compound and simple eyes which allow more light to be gathered when compared to their daytime kin.

Published in the Journal of Hymenoptera Research, the researchers explain that this improved low-light ability could potentially also exist in other Australian species secretly active at night, with their image processing ability best observed through high-resolution close-up images.

Lead author Ph.D. Candidate James Dorey, in the College of Science & Engineering at Flinders University, says the two Australian bee species active at night and during twilight hours are mostly found in Australia’s tropical north, but there could potentially more in arid, subtropical and maybe even temperate conditions across the continent.

“We have confirmed the existence of at least two crepuscular bee species in Australia and there are likely to be many more that can forage both during the day and into the early morning or evening under low light conditions. It’s true that bees aren’t generally known to be very capable when it comes to using their eyes at night, but it turns out that low-light foraging is more common than currently thought,” says Mr Dorey. 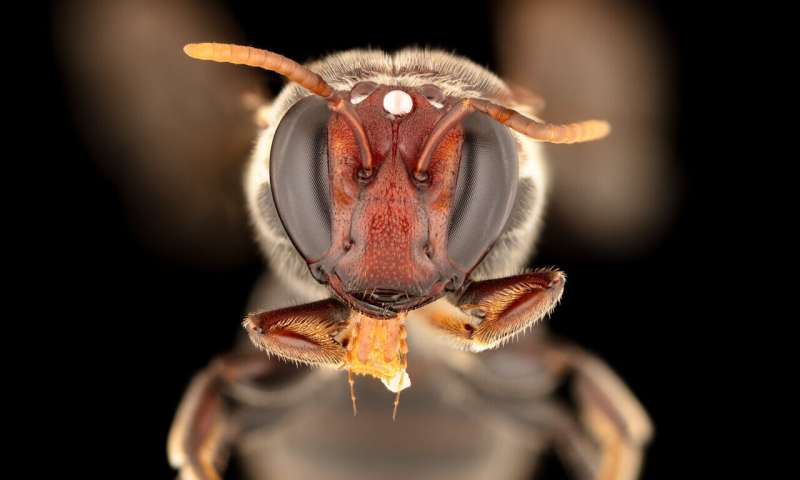 “Before this study, the only way to show that a bee had adapted to low-light was by using difficult-to-obtain behavioural observations, but we have found that you should be able to figure this out by using high-quality images of a specific bee.”

“Our study provides a framework to help identify low-light-adapted bees and the data that is needed to determine the behavioural traits of other species. This is important as we need to increase efforts to collect bee species outside of normal hours and publish new observations to better understand the role that they play in maintaining ecosystems.”

The researchers outline why more needs to be understood about the behaviour of bee species to help protect them from the potential impacts of climate change.

“Global weather patterns are changing and temperatures in many parts of Australia are rising along with the risk of prolonged droughts and fires. So, we have to improve our understanding about insects pollinating at night or in milder parts of the day to avoid potential extinction risks or to mitigate loss of pollination services.”

“This also means we have to highlight the species that operate in a narrow window of time and could be sensitive to climatic changes, so conservation becomes an important concern. Because quite frankly, we have ignored these species up until now.”