Einstein’s description of gravity just got much harder to beat

Einstein’s theory of general relativity—the idea that gravity is matter warping spacetime—has withstood over 100 years of scrutiny and testing, including the newest test from the Event Horizon Telescope collaboration, published today in the latest issue of Physical Review Letters.

According to the findings, Einstein’s theory just got 500 times harder to beat.

Despite its successes, Einstein’s robust theory remains mathematically irreconcilable with quantum mechanics, the scientific understanding of the subatomic world. Testing general relativity is important because the ultimate theory of the universe must encompass both gravity and quantum mechanics.

“We expect a complete theory of gravity to be different from general relativity, but there are many ways one can modify it. We found that whatever the correct theory is, it can’t be significantly different from general relativity when it comes to black holes. We really squeezed down the space of possible modifications,” said UArizona astrophysics professor Dimitrios Psaltis, who until recently was the project scientist of the Event Horizon Telescope collaboration. Psaltis is lead author of a new paper that details the researchers’ findings.

“This is a brand-new way to test general relativity using supermassive black holes,” said Keiichi Asada, an EHT science council member and an expert on radio observations of black holes for Academia Sinica Institute of Astronomy and Astrophysics. 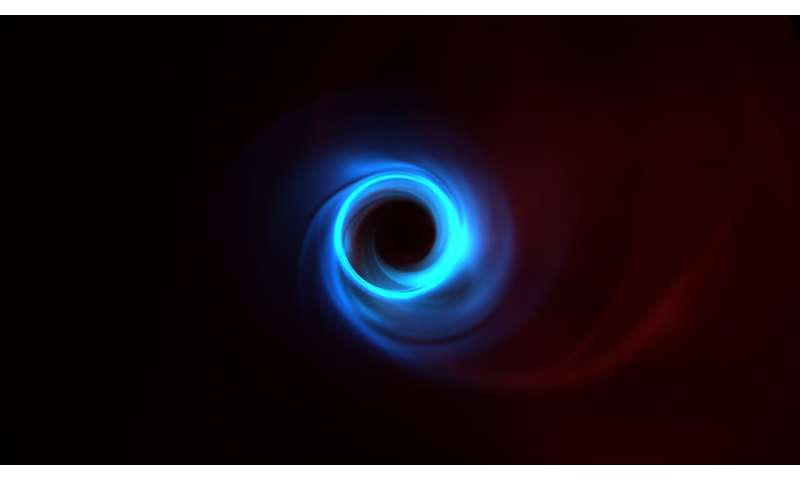 Simulation of M87 black hole showing the motion of plasma as it swirls around the black hole. The bright thin ring that can be seen in blue is the edge of what we call the black hole shadow. Credit: L. Medeiros; C. Chan; D. Psaltis; F. Özel; UArizona; IAS.

To perform the test, the team used the first image ever taken of the supermassive black hole at the center of nearby galaxy M87 obtained with the EHT last year. The first results had shown that the size of the black-hole shadow was consistent with the size predicted by general relativity.

“At that time, we were not able to ask the opposite question: How different can a gravity theory be from general relativity and still be consistent with the shadow size?” said UArizona Steward Theory Fellow Pierre Christian. “We wondered if there was anything we could do with these observations in order to cull some of the alternatives.”

The team did a very broad analysis of many modifications to the theory of general relativity to identify the unique characteristic of a theory of gravity that determines the size of a black hole shadow.

“In this way, we can now pinpoint whether some alternative to general relativity is in agreement with the Event Horizon Telescope observations, without worrying about any other details,” said Lia Medeiros, a postdoctoral fellow at the Institute for Advanced Study who has been part of the EHT collaboration since her time as a UArizona graduate student.

The team focused on the range of alternatives that had passed all the previous tests in the solar system. 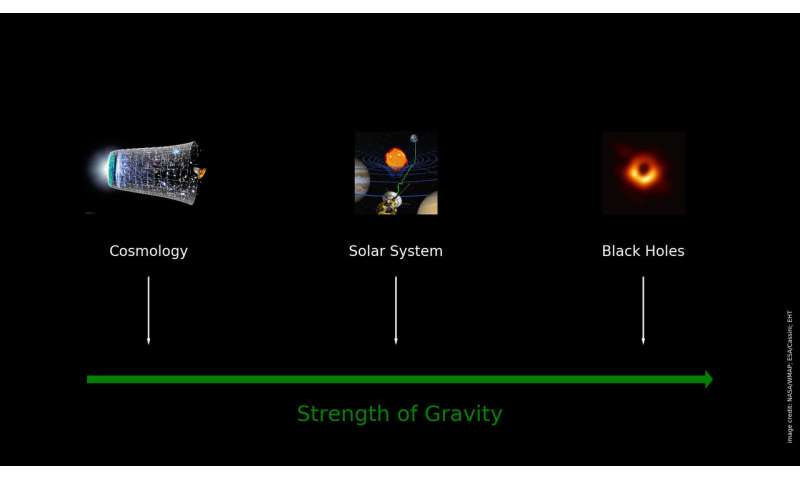 “Using the gauge we developed, we showed that the measured size of the black hole shadow in M87 tightens the wiggle room for modifications to Einstein’s theory of general relativity by almost a factor of 500, compared to previous tests in the solar system,” said UArizona astrophysics professor Feryal Özel, a senior member of the EHT collaboration. “Many ways to modify general relativity fail at this new and tighter black hole shadow test.”

“Together with gravitational wave observations, this marks the beginning of a new era in black hole astrophysics,” Psaltis said.

“We always say general relativity passed all tests with flying colors—if I had a dime for every time I heard that,” Özel said. “But it is true, when you do certain tests, you don’t see that the results deviate from what general relativity predicts. What we’re saying is that while all of that is correct, for the first time we have a different gauge by which we can do a test that’s 500 times better, and that gauge is the shadow size of a black hole.”

Next, the EHT team expects higher fidelity images that will be captured by the expanded array of telescopes, which includes the Greenland Telescope, the 12-meter Telescope on Kitt Peak near Tucson, and the Northern Extended Millimeter Array Observatory in France.

“When we obtain an image of the black hole at the center of our own galaxy, then we can constrain deviations from general relativity even further,” Özel said.

Will Einstein still be right, then?