Catfish are generally brown with dark spots, but a 15-year-old boy fishing in Tennessee had a catch of a lifetime when he hooked one that is all-white.

Edwards Tarumianz reeled in a giant fish on the morning of June 28, but he and the rest of the crew were more impressed by the catfish’s stunning hue rather than its monstrous size, as first reported on by Field and Stream.

The blue catfish was completely white with bright pink and purples coloring around its fins and face, which could be a result of either albinism or leucism.

Albinism is a condition where pigment is absent in the skin and hair and is found among a number of animals, including humans.

Leucism, which is also a genetic condition, reduces pigmentation, leaving the animal pale or with patches of reduced coloring.

Captain Richard Simms, who was the guide of the charter that day, posted images of Tarumianz and his catch on Facebook, along with a statement: ‘You may catfish for the rest of your life and never catch, or even see, another fish like that.

‘I’ve been catfishing seriously for 30 years—guiding for 17 of those—and that’s the first albino to ever come in my boat.’

However, biologists from the Tennessee Wildlife Resources Agency (TWRA) told Field and Stream that they are unable to determine which genetic condition Tarumianz’s fish has.

The pink coloration comes from blood vessels showing through the skin.

Animals with leucism may have mostly typical but lighter coloration patterns.

‘Regardless, we all agree that it is a great and rare catch,’ a TWRA spokesperson told Field and Stream.

Although such sightings are rare in the animal kingdom, people are still able to come across them.

In 2020, volunteers checking sea turtle nests on a South Carolina beach came upon a rare sight: a white sea turtle hatchling crawling across the sand.

The town of Kiawah Island posted on its Facebook page that the Kiawah Island Turtle Patrol found a lone white baby sea turtle that made its way to a public accessible beach. 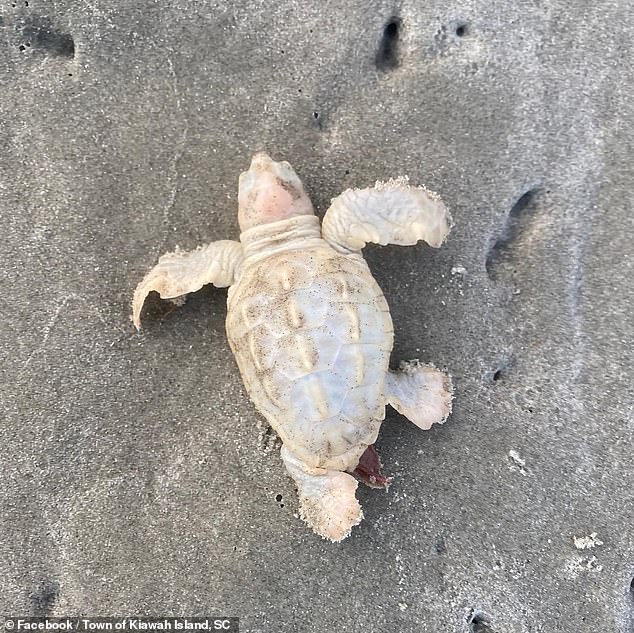 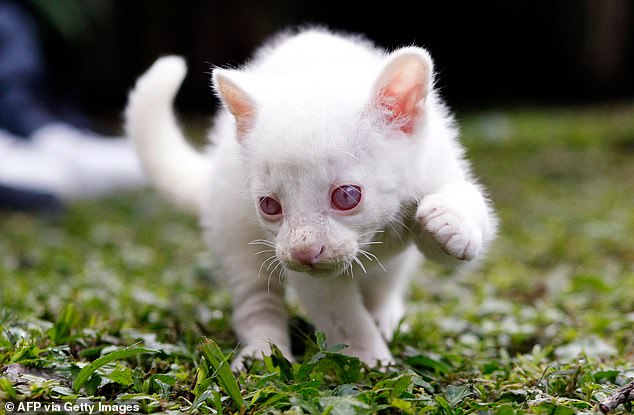 Photos show a tiny turtle that is a creamy white color rather than the more typical gray or green of a sea turtle – or reddish brown in the case that this is a loggerhead turtle.

Officials say the hatchling may have been born with a genetic condition called leucism, which causes a reduction in pigment.

And the turtles has a similar coloration to the catfish caught by Tarumianz.

Although it may appear similar to albinism, leucism does not leave creatures with red or pink eyes.

An albino jaguar cub was rescued in Colombia last December, which is the first of its kind to be found in the country.

Officials spotted the female cub in the Aburra Valley metropolitan area and transferred it to a nearby conservation park for medical treatment.

The cub is completely white with red eyes, which is due to its inability to produce the pigment that colors its skin eyes and hair. Typically the animals are either red-brown or gray.

The tiny cub is now living at the park because its white fur limits its ability to survive in the wild – the lack of melanin makes it difficult for these animals to conceal themselves.

One thought on “Catch of a lifetime: 15-year-old boy hooks a rare all-white catfish with stunning pink and purple highlights while fishing in Tennessee”