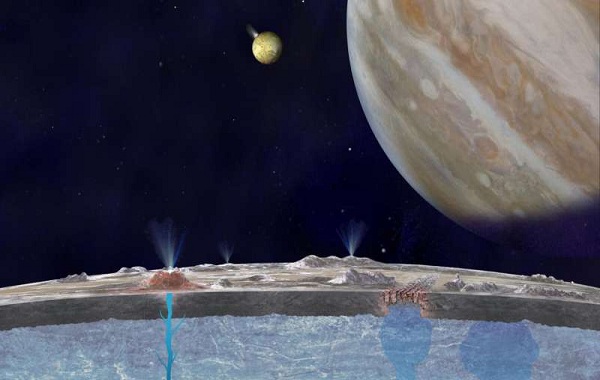 New research by a trans-Atlantic team of scientists suggests that bacteria could survive in briny chemicals that exist on Mars, Enceladus, Europa, Pluto and possibly elsewhere.

The discovery of plumes and subsurface oceans on Jupiter’s moon Europa, organic materials on Mars, and the likelihood of hydrothermal vents in the oceans of Saturn’s moon Enceladus, inches humanity closer to discovering life elsewhere. Such life would have to withstand extreme environments, and previous studies indicate that various types of bacteria can.

Liquid oceans on some bodies far from the Sun have lower freezing points because of chemicals and salts that amount to antifreeze, so microbial life would have to survive both the temperatures and the elements. To zoom in on parameters for microbial survivability, researchers from the Technical University of Berlin, Tufts University, Imperial College London, and Washington State University conducted tests with Planococcus halocryophilus, a bacteria found in the Arctic permafrost.

They subjected the bacteria to sodium, magnesium and calcium chloride cocktails, as well as solutions of perchlorate, which is a chemical compound that may help Mars sustain liquid water during the summer. Lead author Jacob Heinz, of the Technical University of Berlin’s Center of Astronomy and Astrophysics, says that the researchers expanded beyond the conventional sodium chloride solution because “there’s much more than that on Mars.”

Since perchlorates are toxic in large concentrations, researchers wanted to determine whether, how much and at what concentrations they might inhibit bacterial survivability. Survival rates for bacteria in perchlorate were far lower than in all the other solutions, although at temperatures as low as –30 degrees Celsius (–22 degrees Fahrenheit), the rates were slightly better.

Heinz explains that the lowest freezing point depression – the extent to which a solute can lower a solution’s freezing temperature – for perchlorate requires roughly 50 percent of the mass of the total solution, which is incredibly high compared to the freezing-point depression of other chlorides. Given its toxicity, the low survivability of bacteria in concentrated perchlorate solutions isn’t surprising.

Does that mean that Mars can’t support microbial life? According to Heinz, life is still a possibility there. The presence of perchlorate “wouldn’t preclude life on Mars or elsewhere,” he says. “Bacteria in ten percent mass perchlorate solutions can still grow.” Mars’s surface soil contains less than one weight percent of perchlorate, but Heinz points out that salt concentrations in solutions are different than those in soil.

Liquid perchlorate solutions can also be diluted to increase the bacteria’s ability to survive, though a balance between concentration and temperature would have to be maintained.

Theresa Fisher, a Ph.D. student at Arizona State University’s School of Earth and Space Exploration who focuses on microbial ecology and planetary habitability, agrees that the study’s results don’t rule out bacterial survival on Mars – in fact, perhaps the opposite.

Places such as the Atacama Desert (the world’s driest environment) in Chile and parts of Antarctica have relatively high perchlorate levels, Fisher tells Astrobiology Magazine.

“I’d be surprised if microbes haven’t evolved a way to deal with that toxicity,” she says.

Results also varied between the three more conventional saline solvents. Bacteria in calcium chloride (CaCl2) had significantly lower survival rates than those in sodium chloride (NaCl) and magnesium chloride (MgCl2) between 4 and 25 degrees Celsius, but lower temperatures boosted survival in all three.

Generally, saltier solutions improved freeze/thaw survival rates. According to Fisher, “bacteria, when stressed, have shock responses. They manufacture specific proteins that help them adjust, survive, and cope with detrimental environments.” Adding 10 percent sodium chloride decreased the microbial death rate from 20 percent to 7 percent and increased the number of freeze/thaw cycles the bacteria could sustain from 70 to 200. Bacteria manufacture stabilizing proteins as a shock response to severe environments, Fisher explains, “but there are only so many shock proteins bacteria can produce.”

While the study provides insight into extraterrestrial microbial possibilities, Heinz emphasizes the difference between surviving and thriving. Just because bacteria subsist in certain conditions doesn’t mean they actually grow. Heinz is currently working on another study to determine how different concentrations of salts across different temperatures affect bacterial propagation.

“Survival versus growth is a really important distinction,” Fisher affirms, “but life still manages to surprise us. Some bacteria can not only survive in low temperatures, but require them to metabolize and thrive. We should try to be unbiased in assuming what’s necessary for an organism to thrive, not just survive.”

Studies that explore various salt solutions, concentrations, and temperatures help scientists focus the search for life, or at least not rule out possibilities, such as microbial survival in toxic perchlorate. Other variables affect the search for life, such as a bacteria’s ability to withstand radiation or extreme atmospheric pressure. There may even be factors we don’t know about yet, but with each study, there’s one fewer haystack to search.