The Archaeological Park of Pompeii first unearthed this home, or ‘domus’, in 2018, and on Saturday announced the discoveries of four new rooms.

This included a bedroom containing a bedframe and scrap of pillow, a storage room with a wooden cabinet and two upstairs rooms that housed bronze objects and an incense burner.

Previous archaeological work has focused on the elaborately decorated villas of the upper-class, that too were destroyed by the eruption of Mount Vesuvius in 79 AD.

A trunk left open in the bedroom and items discarded on the floor suggest the owners hastily abandoned their property before it was buried in volcanic debris.

Gabriel Zuchtriegel, the Archaeological Park’s director, said: ‘In the Roman empire, there was an ample chunk of the population that struggled with their social status and for whom “daily bread” was anything but a given.

‘A vulnerable class during political crises and food shortages, but also ambitious about climbing the social ladder.’ 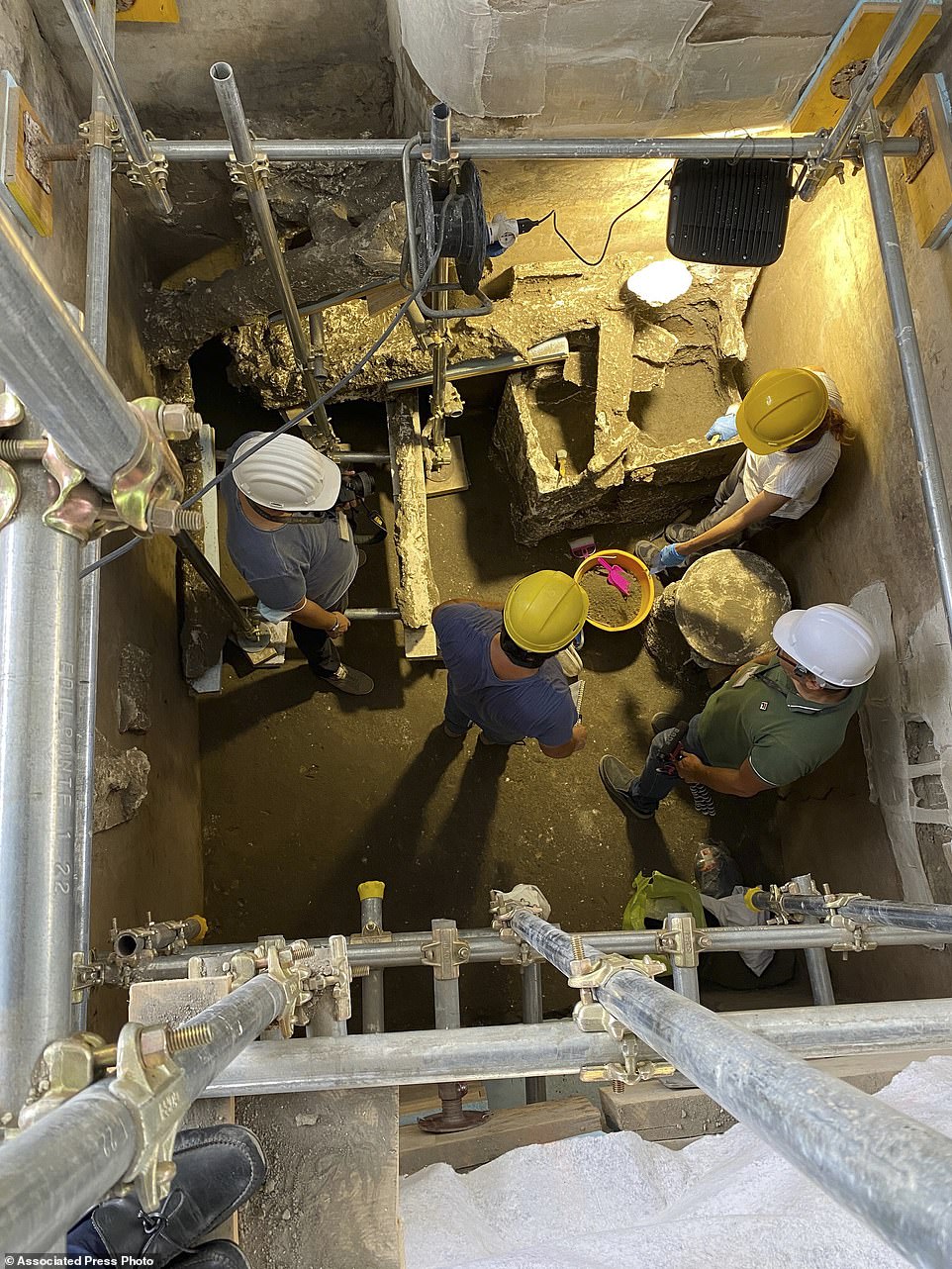 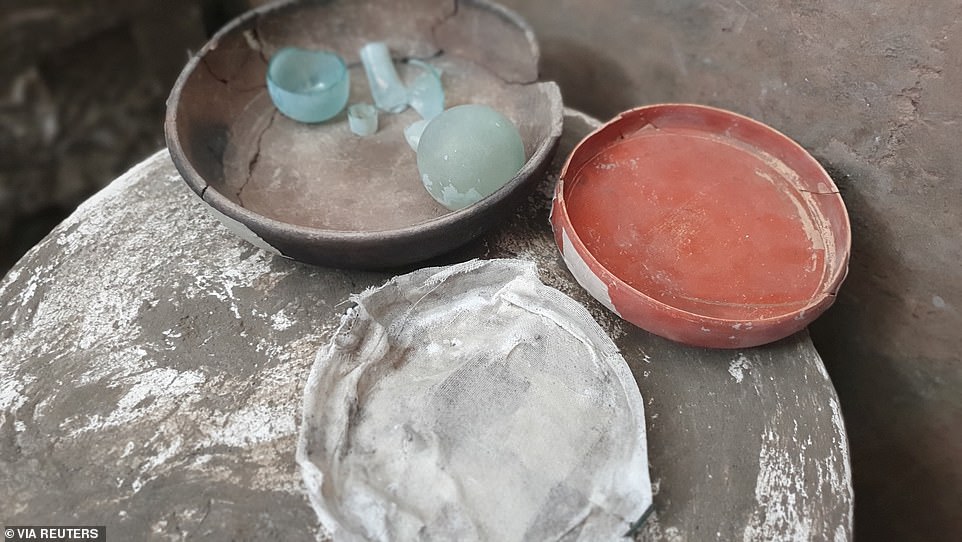 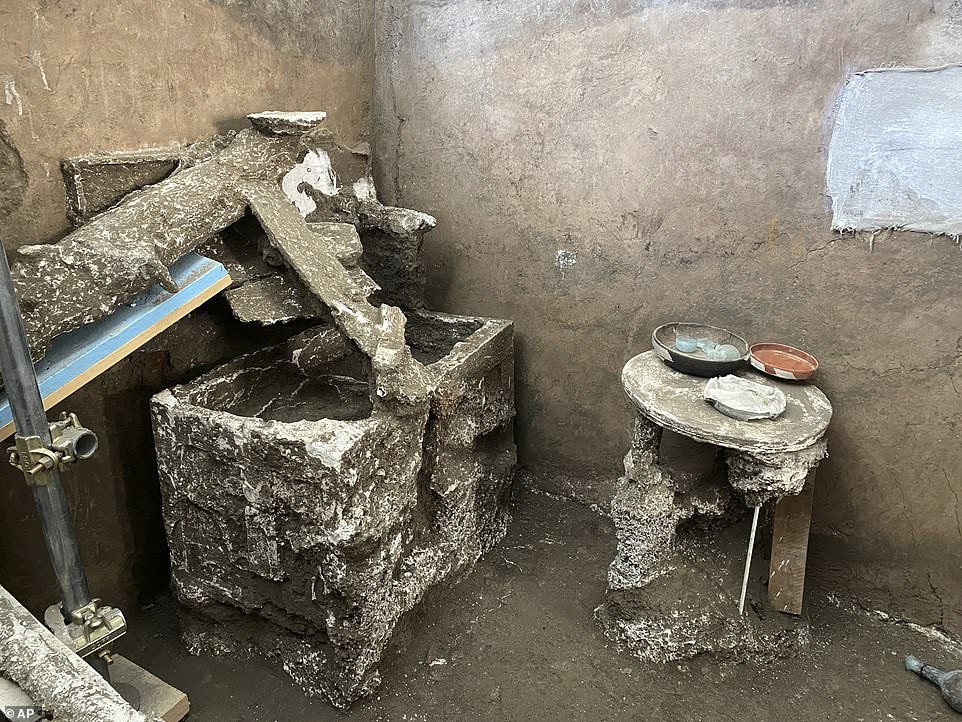 The first area of the site was excavated in 2018 by the Great Pompeii Project, and it was determined to be an elaborately decorated room of worship called a ‘lararium’ in the courtyard.

It included niches on the wall sacred to the Lares, protective domestic spirits, and two ‘agathodaemon’ serpents, symbolising prosperity and good luck.

Its walls are also painted with depictions of idyllic landscapes, plants and birds, and hunting scenes.

The significant embellishments were not replicated in all other rooms of the house, suggesting the family had insufficient funds to do so.

The discovery gave the home, located near modern-day Naples, the name the ‘House of the Larario’.

The Archaeological Park of Pompeii continued exploration in 2021, which revealed more rooms; two on the first floor and two in front of the lararium on the ground floor.

These concealed both intact objects and voids left by furniture of which it was possible for archaeologists to make plaster casts.

One of the rooms on the ground floor was a bedroom where part of the bedframe and a trace of fabric from a pillow had been preserved.

The bed was determined to be identical to those found last year in the Villa of Civita Giuliana in the ‘Room of the Slaves’.

This is a simple cot without a mattress or any kind of decoration which could be dismantled.

Alongside the bed was a bipartite wooden chest that had been left open after its owners fled their home, and beams and planks from the ceiling had fallen onto it.

It held a terracotta sigillata plate and double-spouted lantern with a bas-relief carving of the transformation of Zeus into an eagle.

Next to the chest was a small, circular, three-footed table, upon which was a ceramic cup containing two glass vials or ‘ampoules’, a glass plate and a sigillata plate. 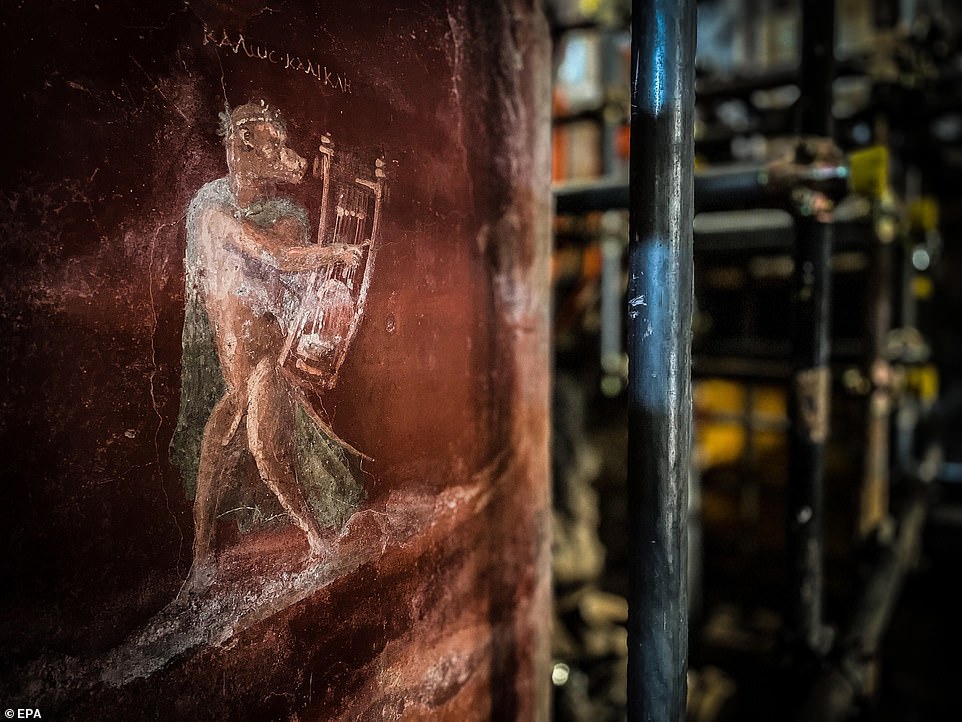 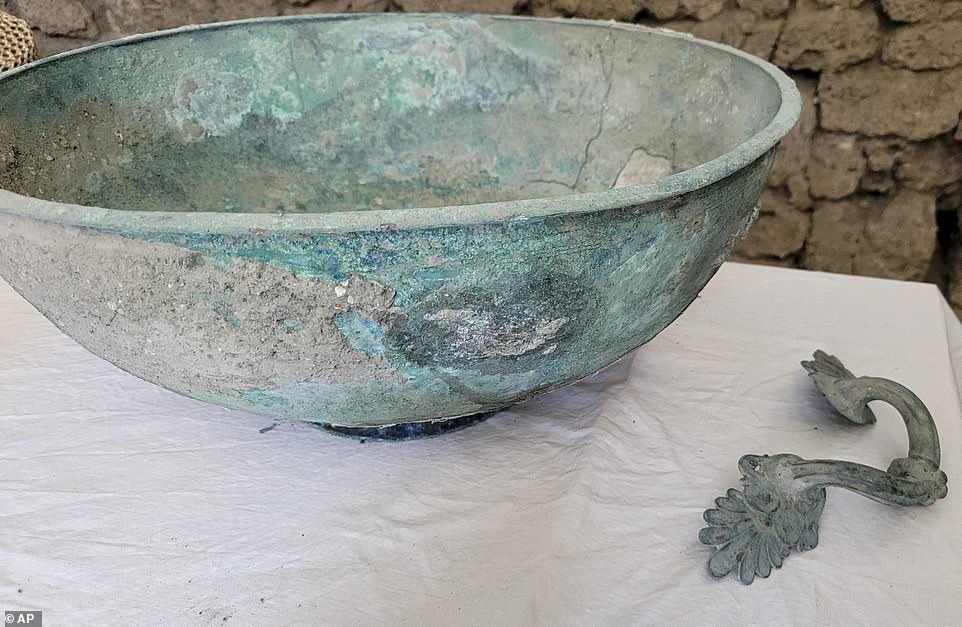 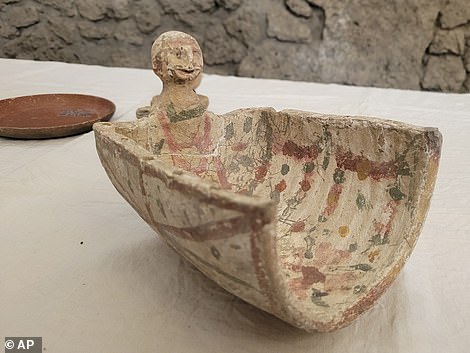 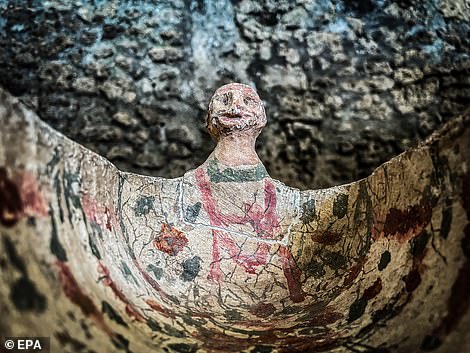 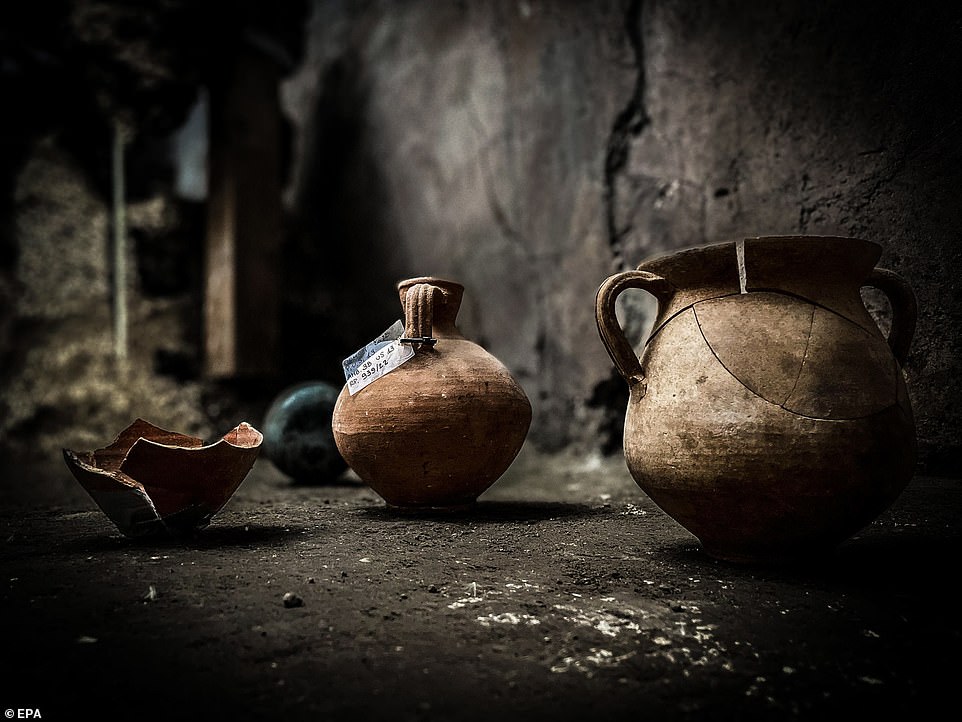 Another glass ampoule as well as small jugs and jars known as ‘amphorae’ were left at the foot of the table before the residents left, suggesting the room was well-used.

The other room on the ground floor is thought to have been a storage room, as it does not have plastered walls and floor is only made of beaten earth.

Archaeologists created casts of a shelf crammed with more amphorae and a pile of wooden planks bound together with cords.

It is thought the planks, of different sizes and tree species, had a multitude of purposes like to make furniture or repair buildings.

Just outside the room, in the hallway leading towards it, was a two-metre tall wooden cabinet of which the backboard had been preserved in the cinerite stone.

It has at least four doors, but the upper part and front doors were damaged by the collapse of the ceiling above it during Vesuvius’ eruption.

It had at least five shelves, with the highest one holding kitchen cookware like small jugs, glass plates and amphorae. Excavation of the lower level is ongoing. 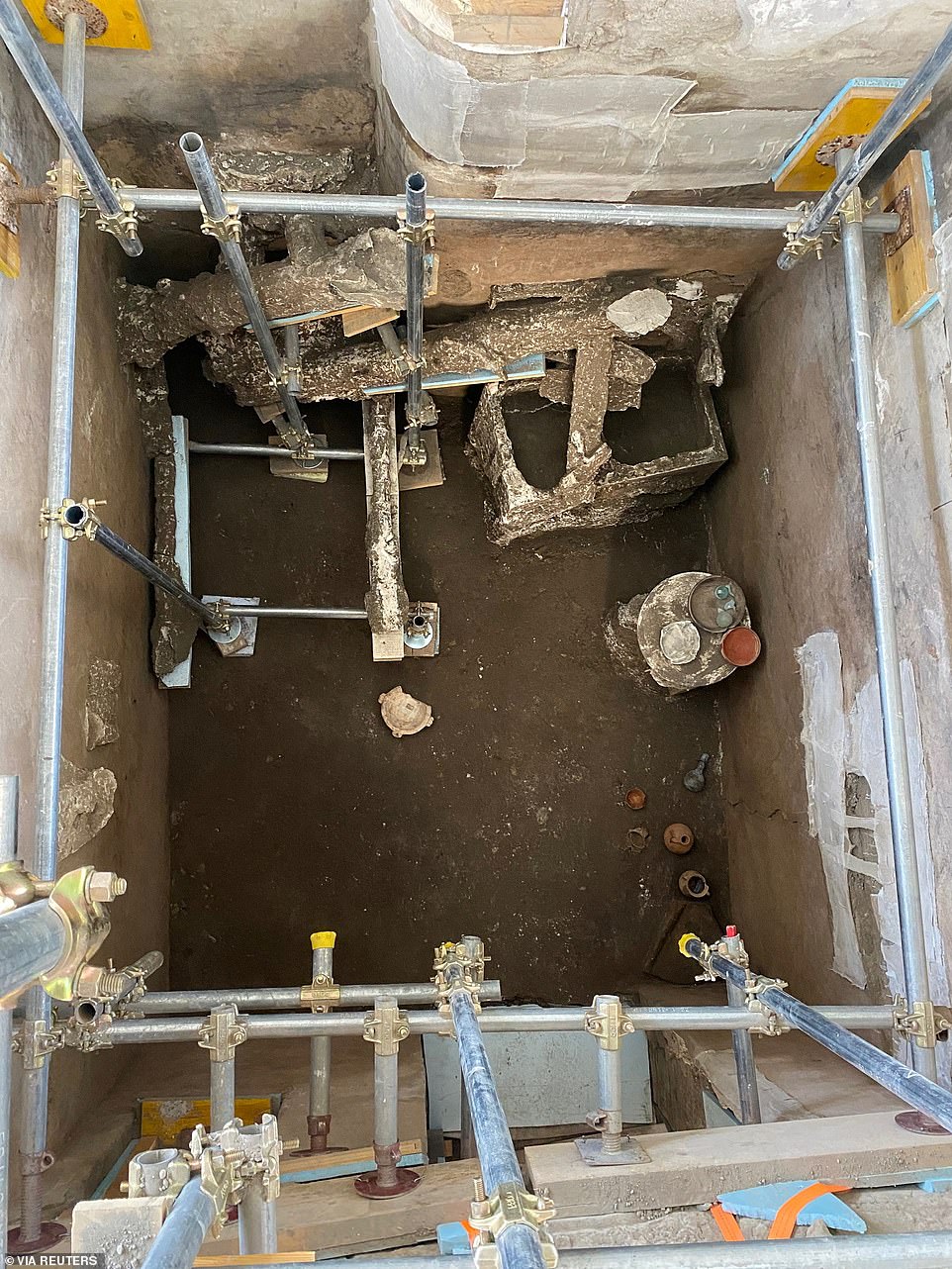 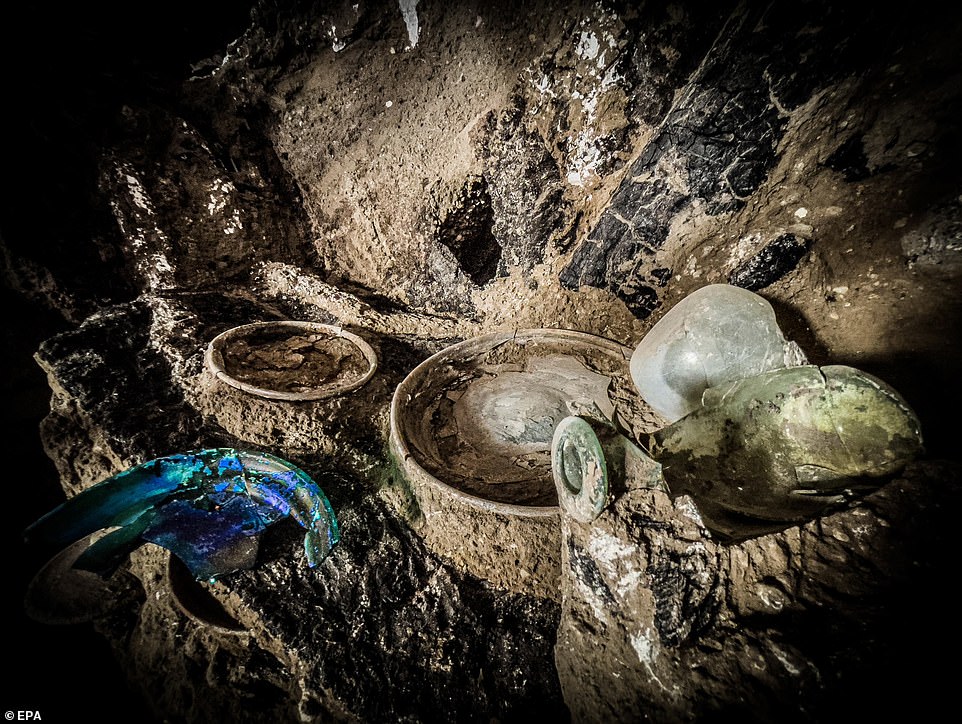 The two rooms on the upper floor were excavated by the team first, but the materials that formed them were primarily found where they had fallen in the areas below.

The experts created a cast of seven detailed waxed tablets that were tied together in one of the rooms, that had been stored on a shelf with other ceramic and bronze objects.

Ceramic vessels made for every day use in the kitchen were found in a collapsed cupboard.

Alongside them were vessels made of precious glass and fine ‘sigitalla’ ceramics that may have been reserved for special occasions.

Bronze vessels, including a beaded bowl with palm leaf-shaped attachments and a jug with sphinx and lion head decoration, were also found.

A cradle-shaped, terracotta incense burner was uncovered in pristine condition, decorated with a multicoloured image of a male subject. 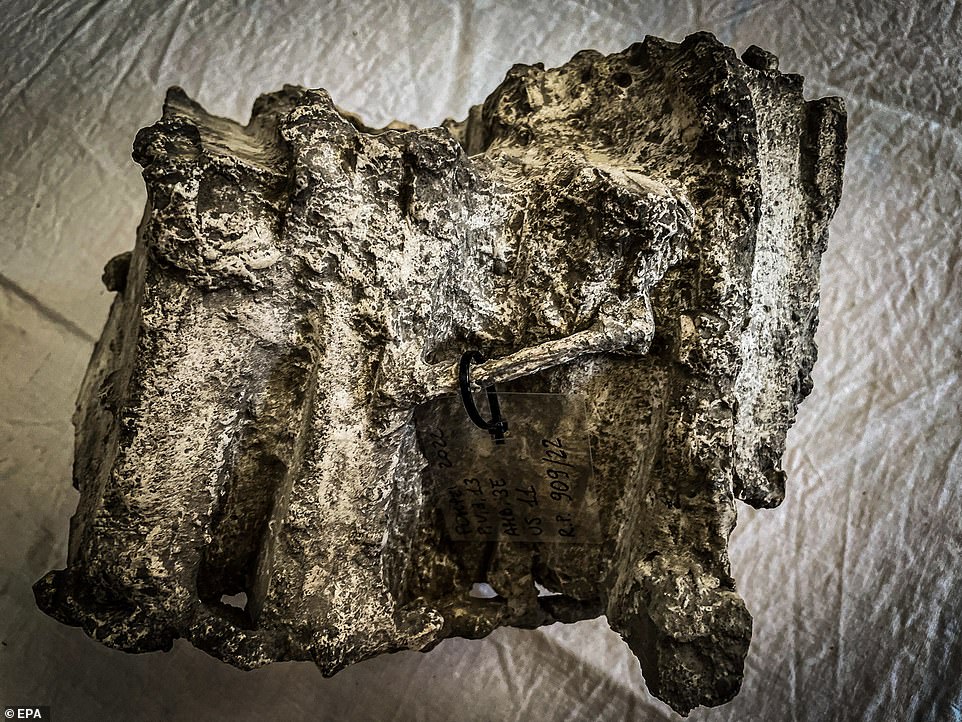 The final room excavated was found behind the House of the Larario, belonging to another residential unit.

The false ceiling had collapsed onto the room, which plaster casts revealed was made of wooden laths covered in gauze and mortar.

Casts of its walls also revealed they had been elaborately decorated with coffered wood and intarsia.

Mr Zuchtriegel added: ‘We do not know who the inhabitants of the house were, but certainly the culture of otium (leisure) which inspired the wonderful decoration of the courtyard represented for them more a future they dreamed of than a lived reality.’

Source: Archaeologists Have Uncovered Rooms of an Ancient House in Pompeii

Extinct Pathogen From Thousands of Years Ago Plagued the Ancient Civilizations