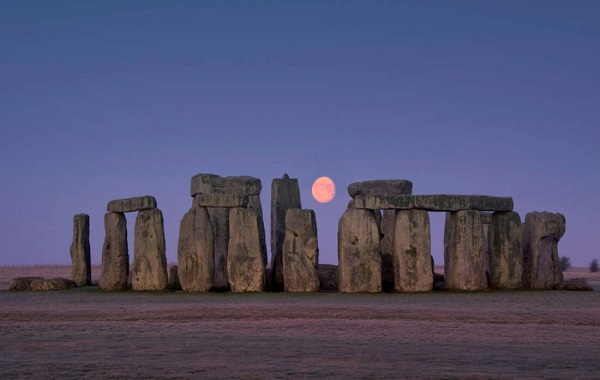 Beneath the landscape of Stonehenge, archeologists have revealed hundreds of large hunting pits, indicating that humans have used this world-famous prehistoric site even longer than previously thought.

Archeologists from the University of Birmingham and Ghent University in Belgium used an array of geophysical sensors to catch a glimpse of what lies below the surrounding Stonehenge landscape. Along with more “conventional” archeological techniques, the researchers also used electromagnetic induction instruments, which gauge the electrical conductivity of the soil to build up a picture of what’s hidden beneath the ground.

Reporting the findings in the Journal of Archaeological Science, the team discovered clear evidence of previously unknown prehistoric activity spanning from Mesolithic to Later Bronze Age at the site.

The older Mesolithic pit is the oldest trace of land use ever discovered at Stonehenge. Dating from approximately 8200 BCE, the researchers suspect the pit was used as a hunting trap for large game such as aurochs (extinct descendants of cattle), red deer, and wild boar. Stonehenge was constructed in numerous stages from 3000 BCE to 2000 BCE, but this pit shows that humans were using the area over 5,000 years prior to this.

In fact, the pits are even older than the nearby the Blick Mead occupation site found 1.5 kilometers (under 1 mile) away, and may be the largest known Early Mesolithic pit feature in northwest Europe.

“By combining new geophysical survey techniques with coring, and pin point excavation, the team has revealed some of the earliest evidence of human activity yet unearthed in the Stonehenge landscape,” said Dr Nick Snashall, Archaeologist for the Stonehenge & Avebury World Heritage Site.

“The discovery of the largest known Early Mesolithic pit in north-west Europe shows that this was a special place for hunter-gatherer communities thousands of years before the first stones were erected,” commented Dr Snashall.

This latest research also indicates that Stonehenge has served a variety of functions over the millennia, not just as the ceremonial site we know it as. For instance, we know that for a significant part of its life, Stonehenge was used as a burial site, as shown by the dozens of bodies found in the area. However, it appears to have been predominately used as a hunting ground in the early Mesolithic era.

“What we’re seeing is not a snapshot of one moment in time. The traces we see in our data span millennia, as indicated by the seven-thousand-year timeframe between the oldest and most recent prehistoric pits we’ve excavated. From early Holocene hunter-gatherers to later Bronze Age inhabitants of farms and field systems, the archaeology we’re detecting is the result of complex and ever-changing occupation of the landscape,” explained Paul Garwood, study author and Senior Lecturer in Prehistory at the University of Birmingham.