If you are reading this, you are probably not alone.

Most people on Earth are habitats for mites that spend the majority of their brief lives burrowed, head-first, in our hair follicles, primarily of the face. In fact, humans are the only habitat for Demodex folliculorum. They are born on us, they feed on us, they mate on us, and they die on us.

So reliant is D. folliculorum on humans for their survival, new research suggests, that the microscopic mites are in the process of evolving from an ectoparasite into an internal symbiont – and one that shares a mutually beneficial relationship with its hosts (that’s us).

In other words, these mites are gradually merging with our bodies so that they now live permanently within us.

Scientists have now sequenced the genomes of these ubiquitous little beasts, and the results show that their human-centered existence could be wreaking changes not seen in other mite species.

“We found these mites have a different arrangement of body part genes to other similar species due to them adapting to a sheltered life inside pores,” explained invertebrate biologist Alejandra Perotti of the University of Reading in the UK.

“These changes to their DNA have resulted in some unusual body features and behaviors.” 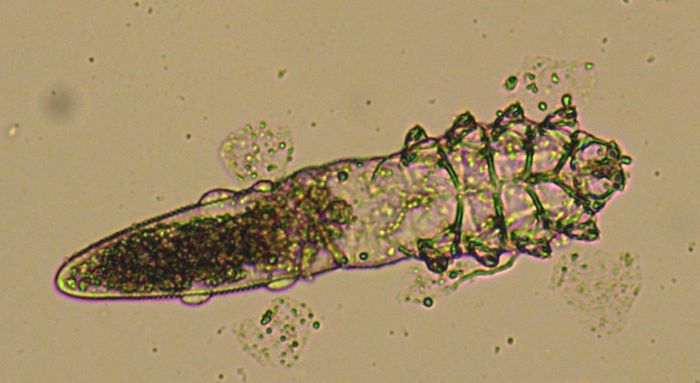 D. folliculorum is actually a fascinating little creature. Human skin detritus is its sole food source, and it spends the majority of its two-week lifespan in pursuit thereof.

The individuals emerge only at night, in the cover of darkness, to crawl painstakingly slowly across the skin to find a mate, and hopefully copulate before returning to the safe darkness of a follicle.

Their tiny bodies are just a third of a millimeter in length, with a cluster of tiny legs and a mouth at one end of a long, sausage-shaped body – just right for scooching down human hair follicles to get at the tasty noms therein.

The work on the genome of the mite, co-led by Marin and geneticist Gilbert Smith of Bangor University in the UK, revealed some of the fascinating genetic characteristics that drives this lifestyle.

Because their lives are so cruisy – they have no natural predators, no competition, and no exposure to other mites – their genome has reduced down to just the bare essentials.

Their legs are powered by three, single-cell muscles, and their bodies have the absolute minimum number of proteins, only what is needed for survival. It’s the smallest number ever seen in its wider group of related species.

This pared-down genome is the reason for some of D. folliculorum‘s other strange peccadilloes, too. For instance, the reason it only comes out at night. Among the genes lost are those responsible for protection against UV radiation, and those that wake animals up at daylight.

They are also unable to produce the hormone melatonin, found in most living organisms, with varying functions; in humans, melatonin is important for regulating the sleep cycle, but in small invertebrates, it induces mobility and reproduction.

This hasn’t seemed to have hindered D. folliculorum, however; it can harvest melatonin secreted by the skin of its host at dusk.

Unlike other mites, their reproductive organs of D. folliculorum have moved towards the front of their bodies, with male mites’ penises pointing forwards and upwards from their backs. This means he has to arrange himself underneath the female as they perch precariously on a hair for mating, which they do all night, AC/DC-style (presumably).

But although mating is pretty important, the potential gene pool is very small: there is very little opportunity for expanding genetic diversity. This could mean that the mites are on track for an evolutionary dead end.

Interestingly, the team also found that, at the nymph stage of development, between larva and adult, is when the mites have the greatest number of cells in their bodies. When they move on to the adult stage, they lose cells – the first evolutionary step, the researchers said, in the march of an arthropod species to a symbiotic lifestyle.

One might wonder what possible benefits humans can gain from these peculiar animals; something else the researchers found might partially hint at the answer. For years, scientists have thought that D. folliculorum doesn’t have an anus, instead accumulating waste in its body to explode out when the mite dies, and thus causing skin conditions.

The team found that this is simply not the case. The mites do indeed have tiny little buttholes; your face probably isn’t full of mite poop expelled posthumously.

“Mites have been blamed for a lot of things,” said zoologist Henk Braig of the University of Bangor and the National University of San Juan in Argentina. “The long association with humans might suggest that they also could have simple but important beneficial roles, for example, in keeping the pores in our face unplugged.”