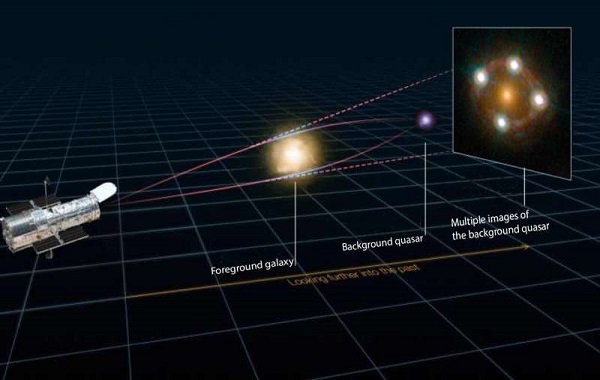 The universe is expanding but astrophysicists aren’t sure exactly how fast that expansion is happening—not because there aren’t answers, but rather because the answers they could give don’t agree.

Now, Simon Birrer, a postdoctoral fellow at Stanford University and the Kavli Institute for Particle Physics and Astrophysics at the Department of Energy’s SLAC National Accelerator Laboratory, and an international team of researchers have a new answer that may, once refined with more data, help resolve the debate.

That new answer is the result of revisiting a decades-old method called time-delay cosmography with new assumptions and additional data to derive a new estimate of the Hubble constant, a measure of the expansion of the Universe. Birrer and colleagues published their results November 20 in the journal Astronomy and Astrophysics.

“It’s a continuation of a large and successful decade-long effort by a large team, with a reset in certain key aspects of our analysis,” Birrer said, and a reminder that “we should always reconsider our assumptions. Our recent work is exactly in this spirit.”

Cosmologists have known for nearly a century that the cosmos is expanding, and in that time they have settled on two main ways to measure that expansion. One method is the cosmic distance ladder, a series of steps that help estimate the distance to far-away supernovae. By examining the spectrum of light from these supernovae, scientists can calculate how quickly they’re receding from us, then divide by distance to estimate the Hubble constant. (The Hubble constant is usually measured in kilometers per second per megaparsec, reflecting the fact that space itself is growing, so that more distant objects recede from us faster than nearer objects.)

Astrophysicists can also estimate the constant from ripples in the cosmic microwave background radiation, or CMB. Those ripples result from sound waves traveling through plasma in the early universe. By measuring the ripples’ size they can infer how long ago and how far away the CMB light we see today was created. Drawing on well-established cosmological theory, researchers can then estimate how rapidly the universe is expanding.

Both approaches, however, have drawbacks. Sound-wave methods rely heavily on how sound travelled in the early universe, which depends in turn on the particular mix of types of matter at the time, on how long sound waves travelled before leaving their imprint on the CMB, and on assumptions about the expansion of the universe since that time. Meanwhile, cosmic distance ladder methods chain together a series of estimates, starting with radar estimates of the distance to the sun and parallax estimates of the distance to pulsating stars called cepheids. That introduces a chain of calibrations and measurements, each of which needs to be precise and accurate enough to ensure a reliable estimate of the Hubble constant.

(Top) The gravitational pull of a massive galaxy (center object) bends the light from a distant quasar on four paths, resulting in four images of the same quasar (A–D). Because each path has a slightly different length, light takes different amounts of time to traverse the paths, so the images appear to twinkle slightly out of sync with each other. (Bottom) A graph of the magnitude, or brightness, of the four quasar images over time. Credit: M. Millon and F. Courbin/Swiss Federal Institute of Technology Lausanne

But there is a way to measure distances more directly, based on what are called strong gravitational lenses. Gravity bends spacetime itself and with it the path light takes through the cosmos. One special case is when a very massive object, such as a galaxy, bends the light of a distant object around such that light reaches us along multiple different paths, effectively creating multiple images of the same background object. A particularly beautiful example is when the distant object varies over time—for example, as accreting supermassive black holes, known as quasars, do. Because the light travels slightly different amounts of time along each path around the lensing galaxy, the result is multiple slightly out-of-sync images of the same flickering.

This phenomenon is more than just pretty. Back in the 1960s, students of Einstein’s theory of gravity, general relativity, showed they could use strong gravitational lenses and the light they bend to more directly measure cosmic distances—if they could measure the relative timing along each path precisely enough and if they knew how matter in the lensing galaxy was distributed.

Over the last decade, Birrer said, measurements became precise enough to take this method, time-delay cosmography, from idea to reality. Successive measurements and a dedicated effort by the H0LiCOW, COSMOGRAIL, STRIDES, and SHARP teams, now under the joint umbrella organization TDCOSMO, culminated in a precise Hubble constant measurement at around 73 kilometers per second per megaparsec with a precision of 2%. That’s in agreement with estimates made with the local distance ladder method, but in tension with the cosmic microwave background measurements under the standard cosmological model assumptions.

But something didn’t sit right with Birrer: The models of galaxy structure previous studies relied on might not have been accurate enough to conclude that the Hubble constant was different from estimates based on the cosmic microwave background. “I went to my colleagues and said, ‘I want to conduct a study that does not rely on those assumptions,'” Birrer said.

In their place, Birrer proposed to investigate a range of additional gravitational lenses to make more observationally grounded estimate of the mass and structure of the lensing galaxies to replace previous assumptions. The new avenue Birrer and the team, TDCOSMO, were undertaking was deliberately held blind—meaning the entire analysis was performed without knowing the resulting outcome on the Hubble constant—to avoid experimenter bias, a procedure established already in the previous analyses of the team and an integral part in moving forward, Birrer said.

Based on this new analysis with significantly fewer assumptions applied to the seven lensing galaxies with time delays the team has analyzed in previous studies, the team arrived at a higher value of the Hubble constant, around 74 kilometers per second per megaparsec, but with greater uncertainty—enough so that their value was consistent with both high and low estimates of the Hubble constant.

However, when Birrer and TDCOSMO added 33 additional lenses with similar properties—but without a variable source to work for time-delay cosmography directly—used to estimate galactic structure, the Hubble constant estimate went down to about 67 kilometers per second per megaparsec, with a 5% uncertainty, in good agreement with sound-wave estimates such as that from the CMB, but also statistically consistent with the previous determinations, given the uncertainties.

That substantial shift does not mean the debate over the Hubble constant’s value is over—far from it, Birrer said. For one thing, his method introduces new uncertainty into the estimate associated with the 33 additional lenses being added into the analysis, and TDCOSMO will need more data to confirm their results, although that data may not be far off into the future. Birrer: “While our new analysis does not statistically invalidate the mass profile assumptions of our previous work, it demonstrates the importance of understanding the mass distribution within galaxies,” he said.

“We are collecting now the data that will allow us to gain back most of the precision we previously had achieved based on stronger assumptions. Looking further ahead we’ll also have images from a lot more lensing galaxies from the Rubin Observatory Legacy Survey of Space and Time to draw on to improve our estimates. Our current analysis is only the first step and paves the way to utilizing these upcoming data sets to provide a definite conclusion on the remaining problem.”