Scientists have developed a new technique using tools made of luminescent DNA, lit up like fireflies, to visualize the mechanical forces of cells at the molecular level. Nature Methods published the work, led by chemists at Emory University, who demonstrated their technique on human blood platelets in laboratory experiments.

“Normally, an optical microscope cannot produce images that resolve objects smaller than the length of a light wave, which is about 500 nanometers,” says Khalid Salaita, Emory professor of chemistry and senior author of the study. “We found a way to leverage recent advances in optical imaging along with our molecular DNA sensors to capture forces at 25 nanometers. That resolution is akin to being on the moon and seeing the ripples caused by raindrops hitting the surface of a lake on the Earth.”

Almost every biological process involves a mechanical component, from cell division to blood clotting to mounting an immune response. “Understanding how cells apply forces and sense forces may help in the development of new therapies for many different disorders,” says Salaita, whose lab is a leader in devising ways to image and map bio-mechanical forces.

The first authors of the paper, Joshua Brockman and Hanquan Su, did the work as Emory graduate students in the Salaita lab. Both recently received their Ph.D.s.

The researchers turned strands of synthetic DNA into molecular tension probes that contain hidden pockets. The probes are attached to receptors on a cell’s surface. Free-floating pieces of DNA tagged with fluorescence serve as imagers. As the unanchored pieces of DNA whizz about they create streaks of light in microscopy videos.

When the cell applies force at a particular receptor site, the attached probes stretch out causing their hidden pockets to open and release tendrils of DNA that are stored inside. The free-floating pieces of DNA are engineered to dock onto these DNA tendrils. When the florescent DNA pieces dock, they are briefly demobilized, showing up as still points of light in the microscopy

Hours of microscopy video are taken of the process, then speeded up to show how the points of light change over time, providing the molecular-level view of the mechanical forces of the cell.

The researchers use a firefly analogy to describe the process.

“Imagine you’re in a field on a moonless night and there is a tree that you can’t see because it’s pitch black out,” says Brockman, who graduated from the Wallace H. Coulter Department of Biomedical Engineering, a joint program of Georgia Tech and Emory, and is now a post-doctoral fellow at Harvard. “For some reason, fireflies really like that tree. As they land on all the branches and along the trunk of the tree, you could slowly build up an image of the outline of the tree. And if you were really patient, you could even detect the branches of the tree waving in the wind by recording how the fireflies change their landing spots over time.” 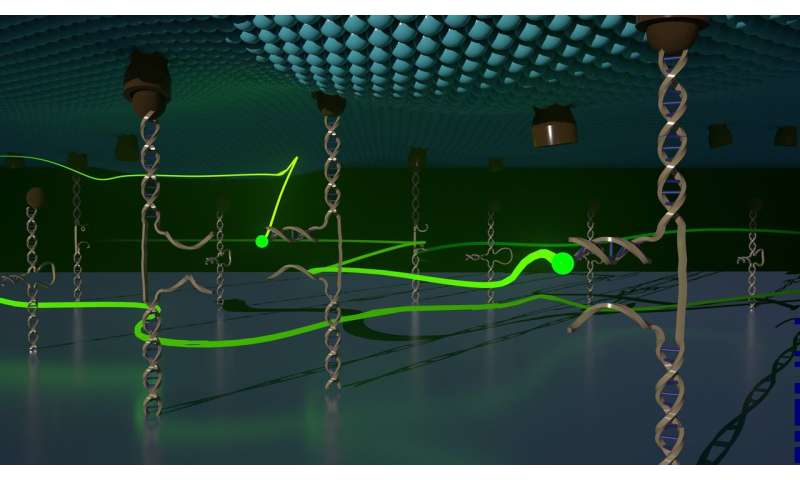 The synthetic DNA probes (light brown) are anchored to a cell surface (in teal). The free-floating DNA imagers are represented in fluorescent green. Credit: Pushkar Shinde

“It’s extremely challenging to image the forces of a living cell at a high resolution,” says Su, who graduated from Emory’s Department of Chemistry and is now a post-doctoral fellow in the Salaita lab. “A big advantage of our technique is that it doesn’t interfere with the normal behavior or health of a cell.”

Another advantage, he adds, is that DNA bases of A, G, T and C, which naturally bind to one another in particular ways, can be engineered within the probe-and-imaging system to control specificity and map multiple forces at one time within a cell.

“Ultimately, we may be able to link various mechanical activities of a cell to specific proteins or to other parts of cellular machinery,” Brockman says. “That may allow us to determine how to alter the cell to change and control its forces.”

By using the technique to image and map the mechanical forces of platelets, the cells that control blood clotting at the site of a wound, the researchers discovered that platelets have a concentrated core of mechanical tension and a thin rim that continuously contracts. “We couldn’t see this pattern before but now we have a crisp image of it,” Salaita says. “How do these mechanical forces control thrombosis and coagulation? We’d like to study them more to see if they could serve as a way to predict a clotting disorder.”

Just as increasingly high-powered telescopes allow us to discover planets, stars and the forces of the universe, higher-powered microscopy allows us to make discoveries about our own biology.

“I hope this new technique leads to better ways to visualize not just the activity of single cells in a laboratory dish, but to learn about cell-to-cell interactions in actual physiological conditions,” Su says. “It’s like opening a new door onto a largely unexplored realm—the forces inside of us.”