The capacity for language is built upon our ability to understand combinations of words and the relationships between them, but the evolutionary history of this ability is little understood. Now, researchers from the University of Warwick have managed to date this capacity to at least 30-40 million years ago, the last common ancestor of monkeys, apes and humans.

Across the globe, humanity flourishes by sharing thoughts, culture, information and technology through language—an incredibly complex method of communication used by no other species. Determining why and when it evolved is, therefore, crucial to understanding what it means to be human.

In the paper, ‘Non adjacent dependency processing in monkeys, apes and humans’, published today in the journal Science Advances, an international consortium of researchers, led by Professor Simon Townsend at the University of Warwick, made a crucial advance in our understanding of when a key cognitive building block of language may have evolved.

Being able to process relationships between words in a sentence is one of the key cognitive abilities underpinning language, whether those words are next to one another, known as an ‘adjacent dependency’, or distant to one another, known as a ‘non-adjacent dependency’. For example, in the sentence “the dog who bit the cat ran away” we understand that is it the dog who ran away rather than the cat, thanks to being able to process the relationship between the first and last phrases.

Dr. Stuart Watson, who carried out this work at the University of Zürich, explains: “Most animals do not produce non-adjacent dependencies in their own natural communication systems, but we wanted to know whether they might nevertheless be able to understand them.” 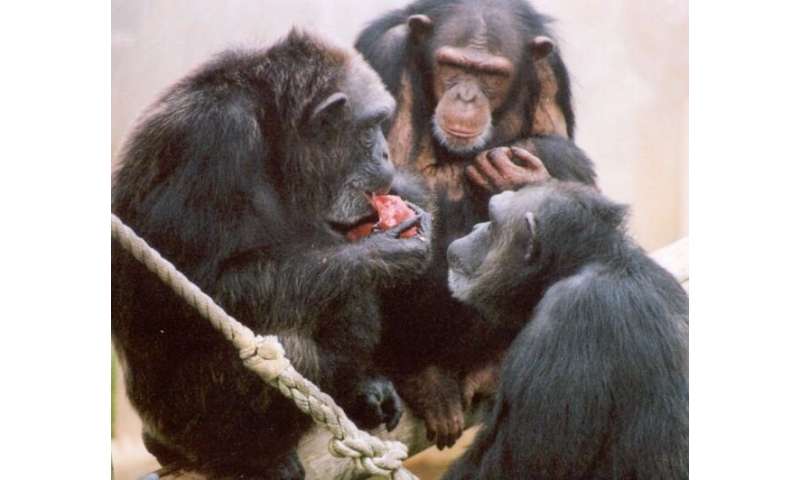 Chimpanzees Jane Tash and Nina, who were studied at the National Center for Chimpanzee Care in Texas. Credit: University of Warwick

The research team used a novel experimental approach for their experiments: They created “artificial grammars” in which sequences made up of meaningless tones instead of words were used to examine the abilities of subjects to process the relationships between sounds. This made it possible to compare the ability to recognize non-contiguous dependencies between three different primate species, even though they do not share a common language. The experiments were carried out with common marmosets (a Brazilian monkey), chimpanzees and humans. 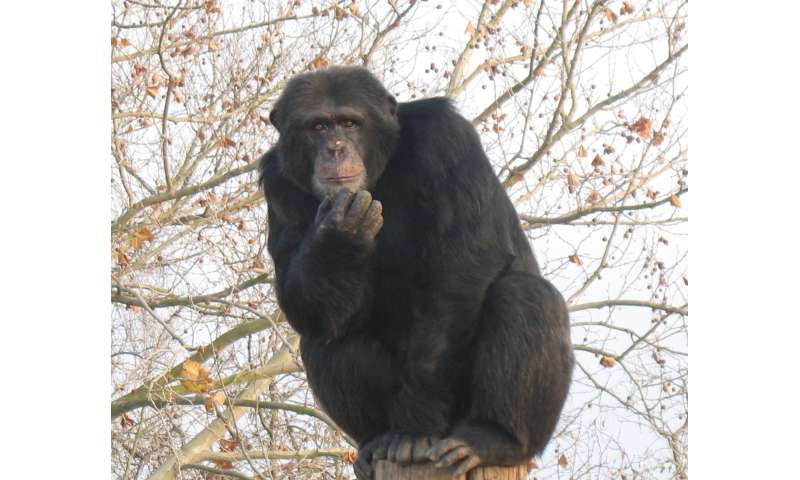 Chimpanzee Judumi, who was studied at the National Center for Chimpanzee Care in Texas. Credit: University of Warwick

The researchers found that all three species were readily able to process the relationships between both adjacent and non-adjacent sound elements. Non-adjacent dependency processing is, therefore, widespread in the primate family.

The implications of this finding are significant, says Professor Townsend, “This indicates that this critical feature of language already existed in our ancient primate ancestors, predating the evolution of language itself by at least 30—40 million years.”