Ancient Spider Reveals a Secret Glow That Sustained It For Eternity

Ancient Spider Reveals a Secret Glow That Sustained It For Eternity

A fossilized spider that glows under ultraviolet light has given away the secret of its exceptional 23-million-year-long existence.

When researchers placed the fossil and others like it under a fluorescent microscope on a whim, they were surprised to notice the subtle outline of the arachnids suddenly pop against their background.

“To our surprise they glowed, and so we got very interested in what the chemistry of these fossils was that made them glow,” explains geologist Alison Olcott from the University of Kansas.

Analyses carried out using other forms of scanning technology, such as energy-dispersive X-ray spectroscopy, revealed most of the mineral making up the fossils and their surrounds contained silicon.

Yet the darker patches on the fossils contained large quantities of two other elements – carbon and sulfur.

Looking closer, scientists realized the spiders weren’t alone. Buried alongside and on top of them were a bunch of other organisms never before seen in fossils of the Aix-en-Provence fossil assemblage in France.

For centuries, scientists have been studying the insect and fish fossils found in this region of France, but only now are we beginning to understand how these fragile creatures were preserved for all that time.

Unlike shells, teeth, and bone, soft tissue rarely fossilizes. And when it does, it requires a unique set of circumstances.

If not for mats of microalgae, researchers think it’s unlikely the fossilized spider from Aix-en-Provence would have made a lasting impression.

In the past, other scientists have argued that if soft tissue is buried alongside single-celled algae, like diatoms, it could protect the fragile material from the degrading effects of oxygen.

But this new finding suggests there’s something other than oxygen shielding at play.

If diatoms produce enough of a sticky extracellular substance in their mats, it could react with organic polymers found in another organism’s soft tissue.

This could trigger a chemical process known as sulfurization, which takes carbon units from the spider’s exoskeleton and cross-links it with sulfur from the algae mats. The result ultimately stabilizes carbon and keeps it from degrading as quickly.

“These microalgae make the sticky, viscous gloop – that’s how they stick together,” explains Olcott.

The authors are still testing this hypothesis, but when they combed the literature on similarly aged fossils, they found the majority were exceptionally preserved in diatom-rich units.

The carbon-heavy chitin found in spider exoskeletons seems to interact particularly well with the microalgae’s goo. While there are some carbon-rich areas outside of the spider fossil as well, these do not show carbon-sulfur complexes like those glowing yellow on the inside.

“The fact that these [carbon-sulfur] complexes are only found in association with the spider morphology indicates that it is likely that the spiders are the source of the organic material involved in sulfurization,” the authors write. 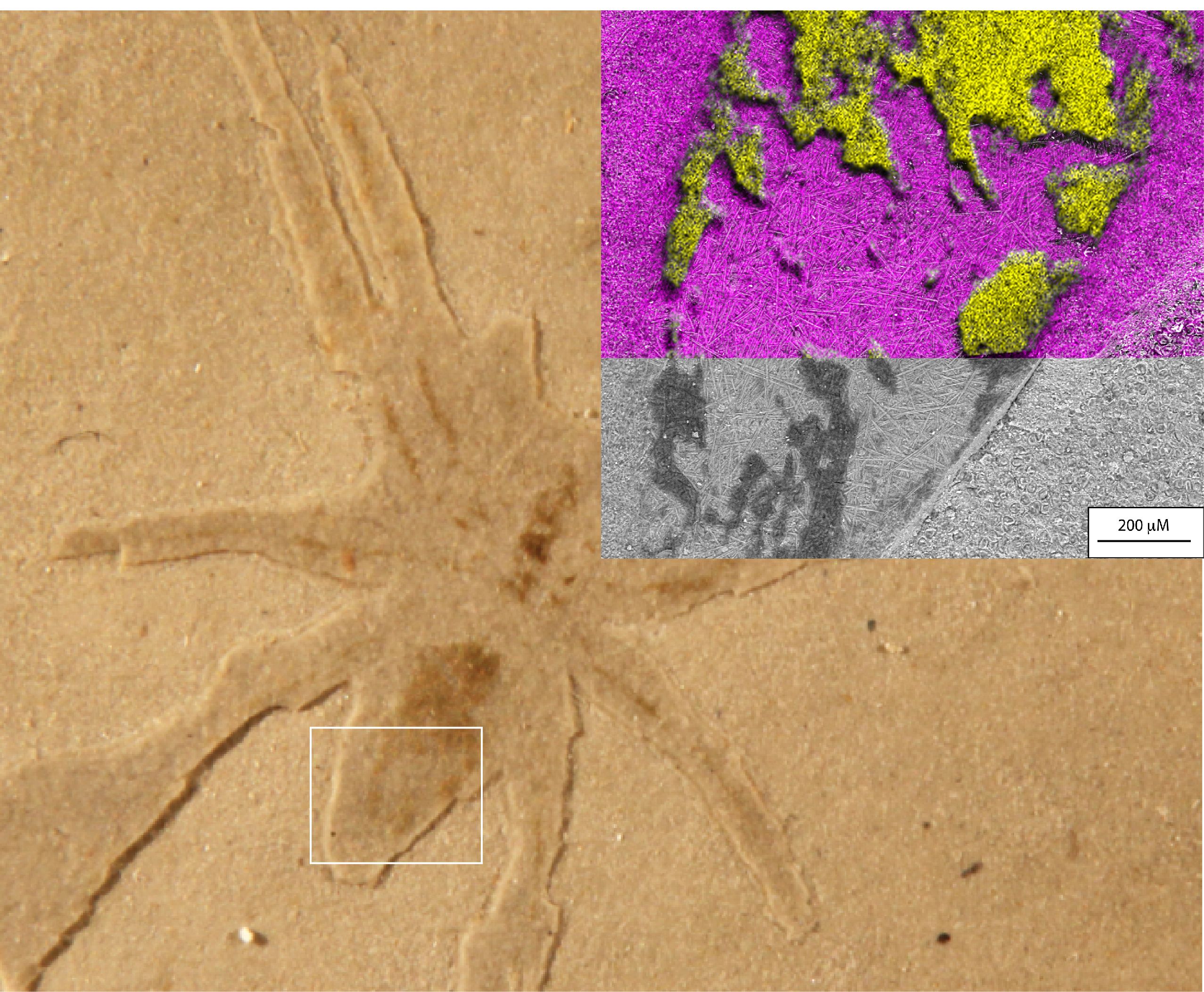 Above: Electron image of fossilized spider abdomen overlain by chemical maps of sulfur (yellow) and silica (pink) in the magnified box.

Oftentimes when fossils like these are studied, they are only examined at a macroscopic scale, not a microscopic one, but the findings from this new research suggest that’s an oversight.

In this instance, when the global pandemic stalled laboratory work, researchers used their time to examine the spider fossil at a microscopic level.

When they did, they found something entirely unexpected, something no one else had reported, despite all the centuries spent working on fossils from Aix-en-Provence.

In all likelihood, the discovery is relevant elsewhere, too.

“The next step is expanding these techniques to other deposits to see if preservation is tied to diatom mats,” says Olcott.

“Of all the other exceptional fossil preservation sites in the world in the Cenozoic Era, something like 80 percent of them are found in association with these microalgae.”

We might have diatoms to thank for some of the most fragile fossils in our possession today.