Researchers believe these ancient microorganisms could still be alive

Geologists are planning to crack open an 830-million-year-old rock salt crystal, which they believe contains ancient microorganisms that may still be alive.

Researchers from the Geological Society of America first announced their discovery of tiny remnants of prokaryotic and algal life inside an ancient halite crystal earlier this month.

These organisms were found inside microscopic bubbles of liquid in the crystal, known as fluid inclusions, which could serve as microhabitats for the tiny colonies to thrive.

Now the researchers want to crack open the crystal, to discover whether or not this ancient life is truly still alive.

While bringing 830-million-year-old life forms back into the modern world might not sound like the most sensible idea, researchers insist it will be carried out with the utmost caution.

‘It does sound like a really bad B-movie, but there is a lot of detailed work that’s been going on for years to try to figure out how to do that in the safest possible way,’ study author Kathy Benison, a geologist at West Virginia University, told NPR.

The extraordinary discovery was initially reported in the journal Geology on May 11.

The researchers used a selection of imaging techniques to study fluid inclusions in a chunk of halite from the 830-million-year-old Browne Formation in central Australia.

They discovered organic solids and liquids that were consistent in size, shape, and fluorescent response to cells of prokaryotes and algae.

The discovery shows that microorganisms can remain well preserved in halite over hundreds of millions of years.

This has implications for the search for alien life, according to the researchers.

It is possible that similar biosignatures could be detected in chemical sediments from Mars, where large salt deposits have been identified as evidence of ancient liquid-water reservoirs. 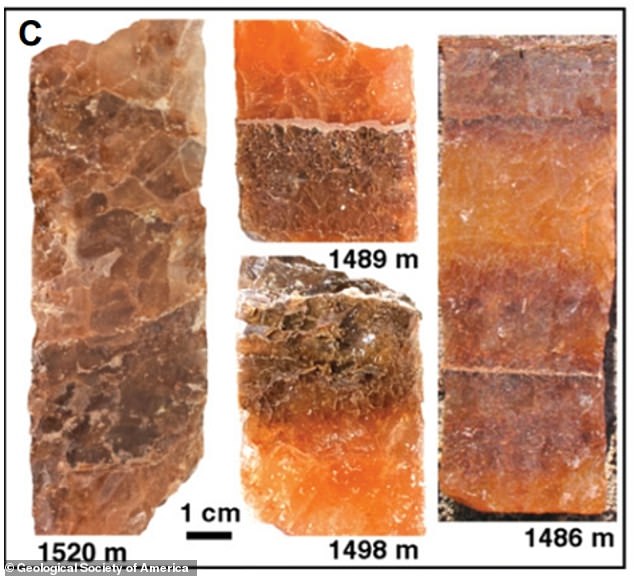 While it may sound implausible that the microorganisms inside the crystal could still be alive, living prokaryotes have previously been extracted from halite dating back 250 million years, so it is not impossible they could survive 830 million years.

‘Possible survival of microorganisms over geologic time scales is not fully understood,’ the researchers wrote in their study.

‘It has been suggested that radiation would destroy organic matter over long time periods, yet Nicastro et al. (2002) found that buried 250 million-year-old halite was exposed to only negligible amounts of radiation.

‘Additionally, microorganisms may survive in fluid inclusions by metabolic changes, including starvation survival and cyst stages, and coexistence with organic compounds or dead cells that could serve as nutrient sources.’

Commenting on the scientists’ plans to open up the crystal, Bonnie Baxter, a biologist at Westminster College in Salt Lake City, who was not involved in the study, said the risk of unleashing an apocalyptic pandemic was relatively low.

‘An environmental organism that has never seen a human is not going to have the mechanism to get inside of us and cause disease,’ she told NPR.

‘So I personally, from a science perspective, have no fear of that.’

2 thoughts on “What could possibly go wrong? Scientists want to crack open a 830-million-year-old crystal containing ancient microorganisms that might still be ALIVE”