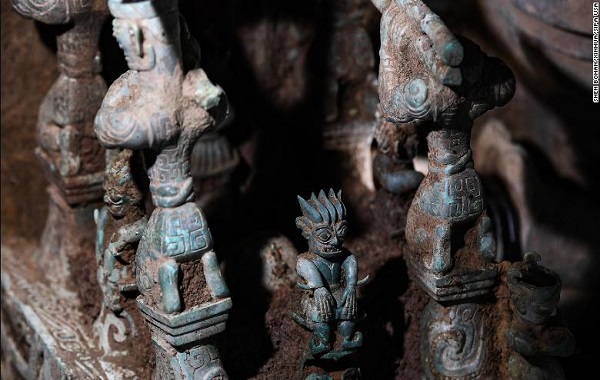 A turtleshell-shaped box and a sacrificial altar are among a treasure trove of 13,000 relics dating back over 3,000 years discovered by archaeologists in southwest China.

The relics — many made of gold, bronze and jade — were unearthed in six sacrificial pits at the Sanxingdui archaeological site, near Chengdu, Chinese state media reported Monday.

Historians know relatively little about the Sanxingdui culture, which left behind no written records or human remains, though many believe it to be part of the ancient kingdom of Shu. It’s hoped the latest finds will shed light on the kingdom, which ruled in the western Sichuan basin along the upper stream of the Yangtze River until it was conquered in 316 BC.

A joint team of archaeologists from Sichuan Provincial Cultural Relics and Archaeology Research Institute, Peking University, Sichuan University and other research institutions have been excavating the six pits at the site since 2020.

New finds from the past

Researchers described a turtleshell-shaped box made of bronze and jade as among their more intriguing finds, saying it was the first time they had uncovered such an item.

“It would not be an exaggeration to say that the vessel is one of a kind, given its distinctive shape, fine craftsmanship and ingenious design. Although we do not know what this vessel was used for, we can assume that ancient people treasured it,” Li Haichao, a professor at Sichuan University, told Xinhua.

A bronze altar nearly 3-feet tall (0.9 meters) was also found in one of the pits, where people of the Shu civilization are thought to have made offerings to heaven, earth and their ancestors.

Traces around the pits of bamboo, reeds, soybeans, cattle and boars suggest these were all offered as sacrifices.

Ran Honglin, director of the Sanxingdui Cultural Relics and Archaeology Research Institute, told Xinhua that the diversity of items at the site showed cultural exchanges between ancient civilizations in China.

He noted that one of the sculptures with the head of a human and the body of a snake were characteristic of ancient Shu civilization, while ceremonial vessels know as “zun” from the site were culturally emblematic of the Zhongyuan, a region known as China’s central plains.

“More cultural relics unearthed at Sanxingdui have also been seen in other locales in China, giving evidence of the early exchange and integration of Chinese civilization,” Ran said.

The 4.6-square-mile archaeological site has yielded thousands of ancient artifacts since a local farmer stumbled across it in the 1920s. Treasures such as a golden mask weighing about 100 grams (0.22 pounds), ivory relics and a jade knife were among artifacts uncovered last year.

Although not yet recognized as a UNESCO World Heritage Site, Sanxingdui is on the organization’s “tentative list” for consideration.

2 thoughts on “Sacrificial altar among 13,000 relics unearthed at Sanxingdui archaeological site in China”