Scientists led by the ESRF, the European Synchrotron, Grenoble, France and the University of Copenhagen, Denmark, have discovered the composition of red and black inks in ancient Egyptian papyri from circa 100-200 AD, leading to a number of hypotheses about writing practices. The analysis, based on synchrotron techniques, shows that lead was probably used as a dryer rather than as a pigment, similar to its usage in 15th-century Europe during the development of oil painting. They have published their results in PNAS.

In ancient Egypt, Egyptians used black ink for writing the main body of text, while red ink was often used to highlight headings, instructions or keywords. During the last decade, many scientific studies have been conducted to elucidate the invention and history of ink in ancient Egypt and in the Mediterranean cultures, for instance ancient Greece and Rome.

The scientists used the powerful X-rays of the ESRF to study the red and black ink in papyri from the Tebtunis temple library, the only large-scale institutional library known to have survived from ancient Egypt. The samples studied in this research project are exceptional, not only because they derive from the famous Tebtunis temple library, but also because the analysis includes as many as 12 ancient Egyptian papyrus fragments, all inscribed with red and black inks.

“By applying 21st century, state-of-the-art technology to reveal the hidden secrets of ancient ink technology, we are contributing to the unveiling the origin of writing practices,” explains Marine Cotte, scientist at the ESRF and co-corresponding author of the paper. 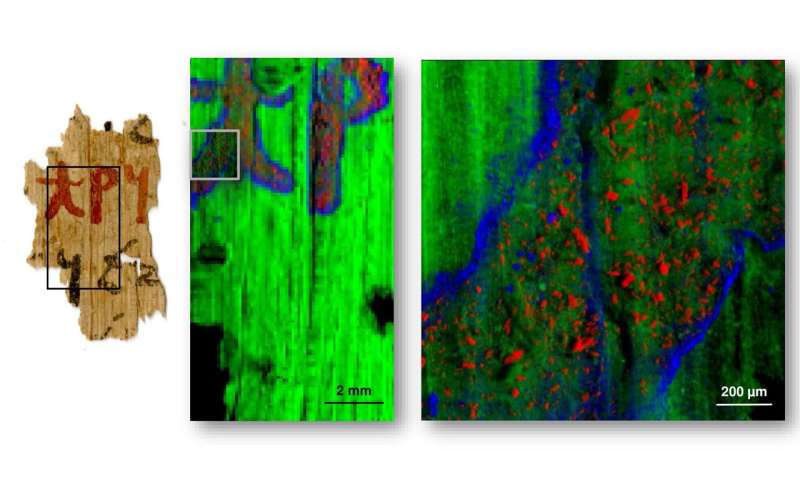 “Something very striking was that we found that lead was added to the ink mixture, not as a dye, but as a dryer of the ink, so that the ink would stay on the papyrus,” says Cotte. The researchers came to this conclusion because they did not find any other type of lead, like lead white or minium, which should be present if lead was used as a pigment. “The fact that the lead was not added as a pigment but as a dryer infers that the ink had quite a complex recipe and could not be made by just anyone,” adds Thomas Christiansen, Egyptologist from the University of Copenhagen and co-corresponding author .

A surprising fact is that the ink recipe can be related to paint practices developed many centuries later during the Renaissance. “In the XV Century, when artists rediscovered the oil painting in Europe, the challenge was to dry the oil in a reasonable amount of time,” says Marine Cotte. “Painters realized that some lead compounds could be used as efficient dryers.” 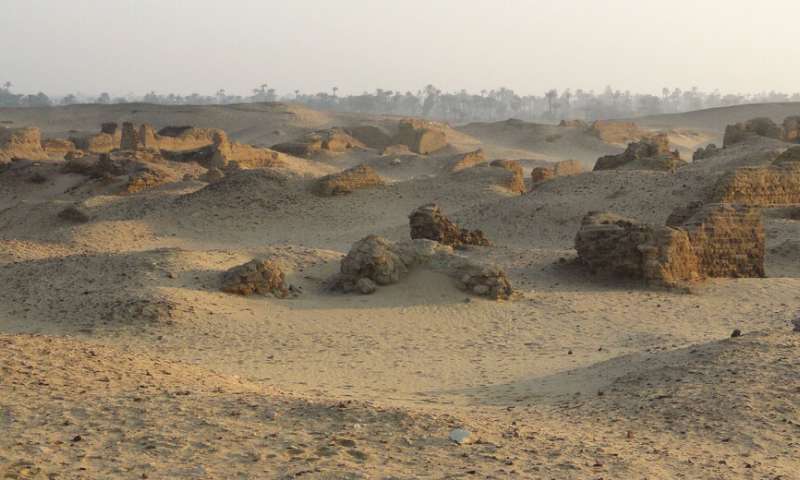 Ruins of the city Tebtunis, where the only temple library to survive from ancient Egypt was discovered in the 1930s. Credit: Professor Kim Ryholt, University of Copenhagen.

This finding was only possible thanks to the different techniques the team used at the ESRF’s beamline ID21 to study the fragments of papyri. They combined several synchrotron techniques (micro X-ray fluorescence, micro X-ray diffraction and micro-infrared spectroscopy) to probe the chemical composition from the millimeter to the sub-micrometer scale to provide information not only on the elemental, but also on the molecular and structural composition of the inks. The scientists discovered that lead was associated to different elements: a complex mixture of lead phosphates, potassium lead sulfates, lead carboxylates and lead chlorides. 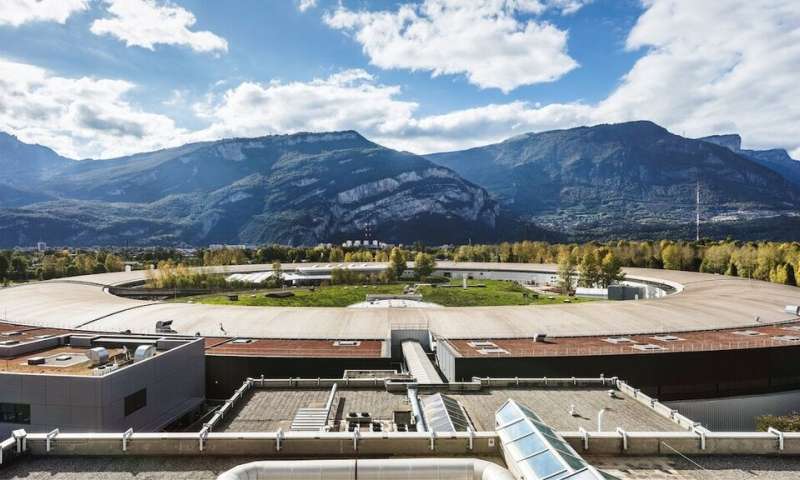 The scientists found that the red color in the ink is given by the ochre, as expected. More surprisingly, they discovered that this red pigment is present as coarse particles while the lead compounds are diffused into papyrus cells, at the micrometer scale, wrapping the cell walls, and creating, at the letter scale, a coffee-ring effect around the iron particles, as if the letters were outlined. “We think that lead must have been present in a finely ground and maybe in a soluble state and that when applied, big particles stayed in place, whilst the smaller ones ‘diffused’ around them,” explains Cotte. In these halos, lead is associated with sulfur and phosphorus. The origin of these lead sulfates and phosphates, i.e. were they initially present in ink or did they form during ink alteration, remains an open question. If they were part of the original ink, understanding their role in the writing process is also puzzling and the motivation of on-going research.