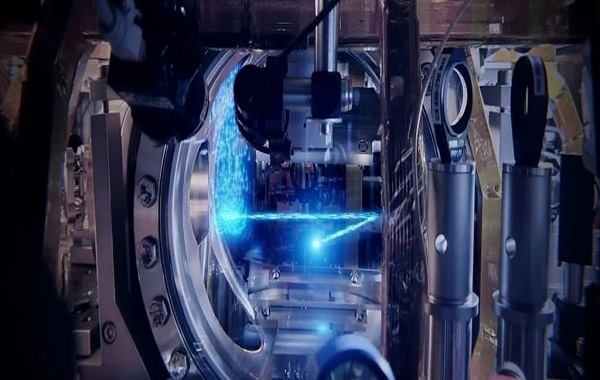 A new breakthrough has allowed physicists to create a beam of atoms that behaves the same way as a laser, and that can theoretically stay on “forever”.

This might finally mean the technology is on its way to practical application, although significant limitations still apply.

Nevertheless, this is a huge step forward for what is known as an “atom laser” – a beam made of atoms marching as a single wave that could one day be used for testing fundamental physical constants, and engineering precision technology.

Atom lasers have been around for a minute. The first atom laser was created by a team of MIT physicists back in 1996. The concept sounds pretty simple: just as a traditional light-based laser consists of photons moving with their waves in sync, a laser made of atoms would require their own wave-like nature to align before being shuffled out as a beam.

As with many things in science, however, it is easier to conceptualize than to realize. At the root of the atom laser is a state of matter called a Bose-Einstein condensate, or BEC.

A BEC is created by cooling a cloud of bosons to just a fraction above absolute zero. At such low temperatures, the atoms sink to their lowest possible energy state without stopping completely.

When they reach these low energies, the particles’ quantum properties can no longer interfere with each other; they move close enough to each other to sort of overlap, resulting in a high-density cloud of atoms that behaves like one ‘super atom’ or matter wave.

However, BECs are something of a paradox. They’re very fragile; even light can destroy a BEC. Given that the atoms in a BEC are cooled using optical lasers, this usually means that a BEC’s existence is fleeting.

Atom lasers that scientists have managed to achieve to date have been of the pulsed, rather than continuous variety; and involve firing off just one pulse before a new BEC needs to be generated.

In order to create a continuous BEC, a team of researchers at the University of Amsterdam in the Netherlands realized something needed to change.

“In previous experiments, the gradual cooling of atoms was all done in one place. In our setup, we decided to spread the cooling steps not over time, but in space: we make the atoms move while they progress through consecutive cooling steps,” explained physicist Florian Schreck.

“In the end, ultracold atoms arrive at the heart of the experiment, where they can be used to form coherent matter waves in a BEC. But while these atoms are being used, new atoms are already on their way to replenish the BEC. In this way, we can keep the process going – essentially forever.”

That ‘heart of the experiment’ is a trap that keeps the BEC shielded from light, a reservoir that can be continuously replenished for as long as the experiment runs.

Protecting the BEC from the light produced by the cooling laser, however, while simple in theory, was again a bit more difficult in practice. Not only were there technical hurdles, but there were also bureaucratic and administrative ones too.

“On moving to Amsterdam in 2013, we began with a leap of faith, borrowed funds, an empty room, and a team entirely funded by personal grants,” said physicist Chun-Chia Chen, who led the research.

“Six years later, in the early hours of Christmas morning 2019, the experiment was finally on the verge of working. We had the idea of adding an extra laser beam to solve a last technical difficulty, and instantly every image we took showed a BEC, the first continuous-wave BEC.”

Now that the first part of the continuous atom laser has been realized – the “continuous atom” part – the next step, the team said, is working on maintaining a stable atom beam. They could achieve this by transferring the atoms to an untrapped state, thereby extracting a propagating matter wave.

Because they used strontium atoms, a popular choice for BECs, the prospect opens exciting opportunities, they said. Atom interferometry using strontium BECs, for example, could be used to conduct investigations of relativity and quantum mechanics, or detect gravitational waves.

“Our experiment is the matter wave analogue of a continuous-wave optical laser with fully reflective cavity mirrors,” the researchers wrote in their paper.

Can we time travel? A theoretical physicist provides some answers

Can we time travel? A theoretical physicist provides some answers