The Curiosity rover has found an outstanding rock formation piercing the alien landscape of Mars. Amongst the shallow sands and boulders of the Gale Crater rise several twisting towers of rock – the spikes of sediment look almost like frozen streams of water poured from an invisible jug in the sky.

In reality, experts say the columns were probably created from cement-like substances that once filled ancient cracks of bedrock. As the softer rock gradually eroded away, the snaking streams of compact material remained standing.

The rock formations were snapped by a camera on board the Curiosity rover on May 17, but the image was only shared last week by NASA and experts at the SETI institute (which stands for the Search for Extraterrestrial Intelligence), as part of SETI’s planetary picture of the day initiative.

#PPOD: Here is another cool rock at Gale crater on Mars! The spikes are most likely the cemented fillings of ancient fractures in a sedimentary rock. The rest of the rock was made of softer material and was eroded away. 📷: @NASA @NASAJPL @Caltech #MSSS fredk, acquired on May 17. pic.twitter.com/RGfjmRBfI7

As alien as the structures might look, they aren’t without precedent.

In Earthly geology, a ‘hoodoo’ is a tall and thin spire of rock formed by erosion. It can also be called a tent rock, fairy chimney, or earth pyramid.

Hoodoos are usually found in dry environments, like the canyons of Utah or southern Serbia, and the columns can sometimes tower as high as ten-story buildings.

The natural structures are formed by hard rock layers that build up within softer sedimentary rock. As the rest of the rock erodes away from rain, wind or frost, you’re left with a magnificent mould of an ancient fracture in the bedrock.

The two towers of rock on Mars look like they are about to topple over compared to the ones we see on Earth, but clearly they are solid enough to withstand the lighter surface gravity experienced on the red planet.

Another strange rock formation found by Curiosity earlier this year might have been created in a similar way, albeit with very different results.

This other, smaller rock looks sort of like a piece of coral or a flower with numerous little petals stretching up towards the sun.

“One theory that has emerged is that the rock is a type of concretion created by minerals deposited by water in cracks or divisions in existing rock,” a press release from NASA explained at the time. 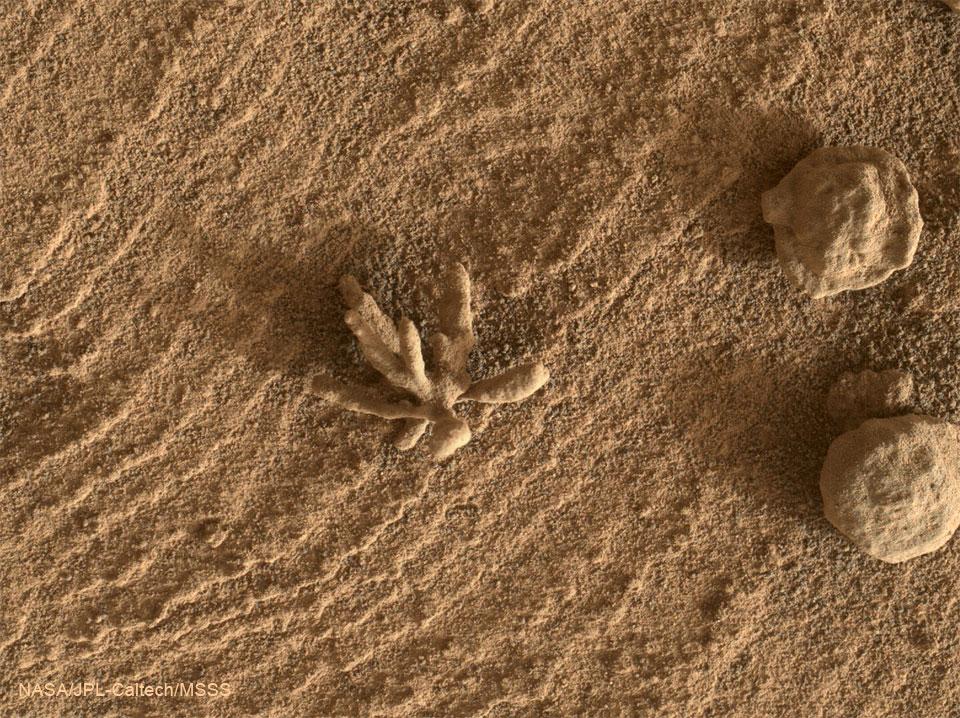 The Gale crater isn’t wholly flat, but the alien spires discovered by Curiosity stand out from the rest of their environment, although no height measurements accompany the image.

The towering tombstones of rock might look lifeless now, but their formation speaks volumes about ancient conditions on  Mars and whether life could have once thrived there billions of years ago.

The Gale crater itself is thought to be a dried-up lake bed, though possibly shallower and more transitory than experts once assumed.

Rock formations in and around the ancient lake are helping to reveal the region’s true history.

2 thoughts on “Curiosity Has Found Some Truly Weird-Looking, Twisty Rock Towers on Mars”