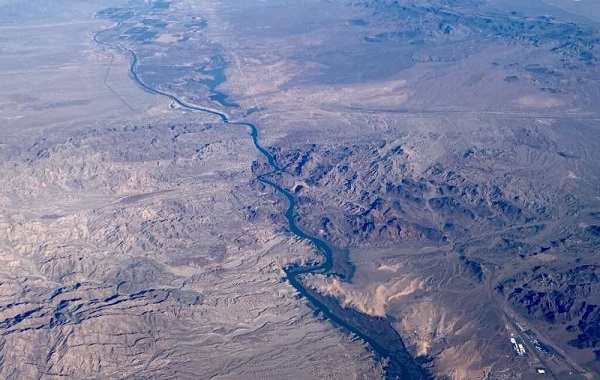 How climate change reduced the flow of the Colorado River

The massive Colorado River, which provides water for seven US states, has seen its flow reduced by 20 percent over the course of a century—and more than half of that loss is due to climate change, according to new research published Thursday.

Two scientists at the US Geological Survey developed a mathematical model of the water movements—snowfall, rainfall, run-off, evaporation—in the upper Colorado River basin for the period from 1913 to 2017.

To do so, they used historical temperature and precipitation data, along with satellite readings of radiation, in order to understand how climate change had affected those water movements.

They observed that global warming had led each year to a reduction in the snow pack, or the amount of snow that accumulates. So if there is less and less snow, it melts earlier and earlier each spring.

With less snow covering the ground, the soil in the river basinwas absorbing more sunlight—instead of it being reflected away by the snow.

As a result, there is more evaporation of water in the basin, Paul Milly of the US Geological Survey explained to AFP. That means a decrease in river flow.

The study shows that during the 1913-2017 period, the flow decreased by roughly 20 percent.

“More than half of this decrease was associated with warming. The rest was related to variations in precipitation,” Milly said.

The Colorado River—which is 1,450 miles (2,330 kilometers) long—is one of the main rivers in the southwestern United States.

It is a vital source of water for 40 million people, including the residents of Denver, Las Vegas and Los Angeles.

It flows into Mexico and by the time it ends in the Gulf of California, it is nearly dried out.